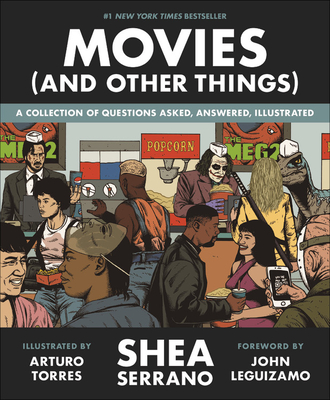 INSTANT #1 NEW YORK TIMES BESTSELLER
WALL STREET JOURNAL BESTSELLER
BARNES & NOBLE BESTSELLER
AMAZON BESTSELLER
Paging through Serrano's Movies (and Other Things) is like taking a long drive at night with a friend; there's that warmth and familiarity where the chat is more important than the fastest route from Point A to Point B...It's like a textbook gone right; your attention couldn't wander if it tried. -- Elisabeth Egan, New York Times Book Review Shea Serrano is back, and his new book, Movies (And Other Things), combines the fury of a John Wick shootout, the sly brilliance of Regina George holding court at a cafeteria table, and the sheer power of a Denzel monologue, all into one. Movies (And Other Things) is a book about, quite frankly, movies (and other things). One of the chapters, for example, answers which race Kevin Costner was able to white savior the best, because did you know that he white saviors Mexicans in McFarland, USA, and white saviors Native Americans in Dances with Wolves, and white saviors Black people in Black or White, and white saviors the Cleveland Browns in Draft Day? Another of the chapters, for a second example, answers what other high school movie characters would be in Regina George's circle of friends if we opened up the Mean Girls universe to include other movies (Johnny Lawrence is temporarily in, Claire from The Breakfast Club is in, Ferris Bueller is out, Isis from Bring It On is out...). Another of the chapters, for a third example, creates a special version of the Academy Awards specifically for rom-coms, the most underrated movie genre of all. And another of the chapters, for a final example, is actually a triple chapter that serves as an NBA-style draft of the very best and most memorable moments in gangster movies. Many, many things happen in Movies (And Other Things), some of which funny, others of which are sad, a few of which are insightful, and all of which are handled with the type of care and dedication to the smallest details and pockets of pop culture that only a book by Shea Serrano can provide.

The Lure of the Vampire: Gender, Fiction, and Fandom from Bram Stoker to Buffy the Vampire Slayer

The Room: The Definitive Guide

The Worst Movies of All Time: Or : What Were They Thinking?

The Art of Turning Red

Marvel's Doctor Strange in the Multiverse of Madness: The Official Movie Special Book

The Nightmare Before Christmas Tarot Deck and Guidebook

Disney Tim Burton's the Nightmare Before Christmas: 13 Frights of Halloween

Woodlands Dark and Days Bewitched: A Map of Folk Horror

Making the Best Years of Our Lives: The Hollywood Classic That Inspired a Nation

The Method: How the Twentieth Century Learned to ACT

The Nightmare Before Christmas Tarot Deck and Guidebook Gift Set

The Art of Love, Death + Robots

Part of My World: What I've Learned from the Little Mermaid about Love, Faith, and Finding My Voice

The Art of Zootopia

The New York Times Book of Movies: The Essential 1,000 Films to See

From Hollywood with Love: The Rise and Fall (and Rise Again) of the Romantic Comedy

The Anime Tarot Deck and Guidebook

Deanna Durbin, Judy Garland, and the Golden Age of Hollywood

Jim Henson's Labyrinth: Bestiary: A Definitive Guide to the Creatures of the Goblin King's Realm

You've Got Red on You: How Shaun of the Dead Was Brought to Life

The Goonies: The Official Coloring Book

Notes on the Cinematograph

Behind the Kaiju Curtain: A Journey Onto Japan's Biggest Film Sets

Star Wars: The Tiny Book of Sith (Tiny Book): Knowledge from the Dark Side of the Force

The Art of Tangled