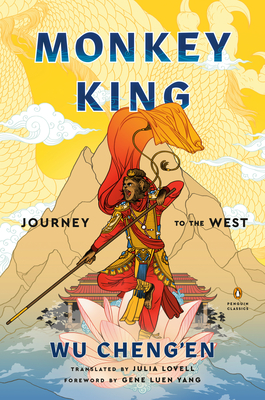 A Chinese Lord of the Rings and one of the all-time great fantasy novels--which Neil Gaiman has said is in the DNA of 1.5 billion people--now in a thrilling new one-volume translation A Penguin Classics Hardcover A shape-shifting trickster on a kung-fu quest for eternal life, Sun Wukong, or Monkey King, is one of the most memorable superheroes in world literature, known to legions of fans of the most popular anime of all time, Dragon Ball, and the world's largest e-sport, the video game League of Legends. High-spirited and omni-talented, he amasses dazzling weapons and skills on his journey to immortality: a gold-hooped staff that can grow as tall as the sky and shrink to the size of a needle; the ability to travel 108,000 miles in a single somersault. A master of subterfuge, he can transform himself into whomever or whatever he chooses and turn each of his body's 84,000 hairs into an army of clones. But his penchant for mischief repeatedly gets him into trouble, and when he raids Heaven's Orchard of Immortal Peaches and gorges himself on the elixirs of the gods, the Buddha pins him beneath a mountain, freeing him only five hundred years later for a chance to redeem himself: He is to protect the pious monk Tripitaka on his fourteen-year journey to India in search of precious Buddhist sutras that will bring enlightenment to the Chinese empire. Joined by two other fallen immortals--Pigsy, a rice-loving pig able to fly with its ears, and Sandy, a depressive man-eating river-sand monster--Monkey King undergoes eighty-one trials, doing battle with Red Boy, Princess Jade-Face, the Monstress Dowager, and all manner of dragons, ogres, wizards, and femmes fatales, navigating the perils of Fire-Cloud Cave, the River of Flowing Sand, the Water-Crystal Palace, and Casserole Mountain, and being serially captured, lacquered, sautéed, steamed, and liquefied, but always hatching an ingenious plan to get himself and his fellow pilgrims out of their latest jam. Monkey King: Journey to the West is at once a rollicking adventure, a comic satire of Chinese bureaucracy, and a spring of spiritual insight. With this new translation, the irrepressible rogue hero of one of the Four Great Classical Novels of Chinese literature has the potential to vault, with his signature cloud-somersault and unerring sense for fun, into the hearts of millions of Americans.

Queen of the Hillbillies: The Writings of May Kennedy McCord

His Greatest Speeches: How Lincoln Moved the Nation

The Talks - No Idea Is Final: Quotes from the Creative Voices of Our Time

The Translator of Desires: Poems

Why She Wrote: A Graphic History of the Lives, Inspiration, and Influence Behind the Pens of Classic Women Writers

Wieland, or the Transformation, an American Tale

Oh, to Be a Painter!

The Pushcart Prize XLVI: Best of the Small Presses 2022 Edition

We Are the Ones We Have Been Waiting for: Inner Light in a Time of Darkness

The Plain in Flames

The Best Horror of the Year Volume Thirteen

On Not Knowing: How to Love and Other Essays