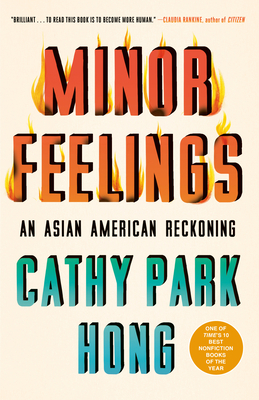 NEW YORK TIMES BESTSELLER - PULITZER PRIZE FINALIST - NATIONAL BOOK CRITICS CIRCLE AWARD WINNER - A ruthlessly honest, emotionally charged, and utterly original exploration of Asian American consciousness Brilliant . . . To read this book is to become more human.--Claudia Rankine, author of Citizen In development as a television series starring and adapted by Greta Lee - One of Time's 10 Best Nonfiction Books of the Year - Named One of the Best Books of the Year by The New York Times, The Washington Post, NPR, New Statesman, BuzzFeed, Esquire, The New York Public Library, and Book Riot Poet and essayist Cathy Park Hong fearlessly and provocatively blends memoir, cultural criticism, and history to expose fresh truths about racialized consciousness in America. Part memoir and part cultural criticism, this collection is vulnerable, humorous, and provocative--and its relentless and riveting pursuit of vital questions around family and friendship, art and politics, identity and individuality, will change the way you think about our world. Binding these essays together is Hong's theory of minor feelings. As the daughter of Korean immigrants, Cathy Park Hong grew up steeped in shame, suspicion, and melancholy. She would later understand that these minor feelings occur when American optimism contradicts your own reality--when you believe the lies you're told about your own racial identity. Minor feelings are not small, they're dissonant--and in their tension Hong finds the key to the questions that haunt her. With sly humor and a poet's searching mind, Hong uses her own story as a portal into a deeper examination of racial consciousness in America today. This intimate and devastating book traces her relationship to the English language, to shame and depression, to poetry and female friendship. A radically honest work of art, Minor Feelings forms a portrait of one Asian American psyche--and of a writer's search to both uncover and speak the truth. Praise for Minor Feelings Hong begins her new book of essays with a bang. . . .The essays wander a variegated terrain of memoir, criticism and polemic, oscillating between smooth proclamations of certainty and twitches of self-doubt. . . . Minor Feelings is studded with moments [of] candor and dark humor shot through with glittering self-awareness.--The New York Times Hong uses her own experiences as a jumping off point to examine race and emotion in the United States.--Newsweek Powerful . . . [Hong] brings together memoiristic personal essay and reflection, historical accounts and modern reporting, and other works of art and writing, in order to amplify a multitude of voices and capture Asian America as a collection of contradictions. She does so with sharp wit and radical transparency.--Salon