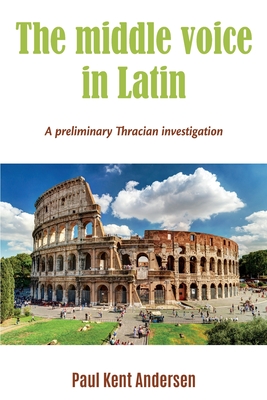 The middle voice in Latin: A preliminary Thracian investigation

In both Classical Greek and Latin, there were two and only two sets of personal inflectional endings. Each and every finite verb in Classical Greek and Latin was unconditionally conjugated by using one or the other of these two sets of inflectional personal endings. There were no verbs which were not conjugated in this manner, nor was there ever a third alternative. The Greek and Roman grammarians (Thracians) not only understood this, but they also understood that these two distinct sets of inflectional personal endings represented the very same categories in both languages. For some strange and inexplicable reason those grammarians coming after the Greeks and Romans (non-Thracians) took it upon themselves to take the form of the verb túptomai which was unanimously regarded as the passive form of the verb in Greek and relabeled it the middle form of the verb. They did this moreover without changing the labels in Latin. So, in effect, they took a single morphological category passive and reinvented it as two separate categories, namely the middle and the passive. In non-Thracian linguistics, changing labels entails changing reality at the same time and thus they were forced to reinvent the Latin language without a middle voice. In non-Thracian linguistics this is simply a matter of making claims such as the following: In Latin ... the old middle voice 'became' a passive, i.e., was used only in passive functions, while intransitive (/stative) functions were expressed by other morphological means (Hock 1991: 348). This active: middle semantic contrast, such as it is, was retained for longer in Greek than in Sanskrit and is totally absent in Latin (Lightfoot 1979: 241).Then all one needs to do is to repeat such claims three times and they automatically become facts; from there the Woozle effect takes over: The Woozle effect, also known as evidence by citation, or a woozle, occurs when frequent citation of previous publications that lack evidence misleads individuals, groups, and the public into thinking or believing there is evidence, and nonfacts become urban myths and factoids (Google).The purpose of this book is threefold: (í) to demonstrate that the set of personal inflectional endings labeled 'passive' in Latin represents the very same category as that expressed by the set of endings labeled 'middle' in Classical Greek, (ii) to present an investigation of all five (sic!) grammatical voices recognized by the Roman grammarians - Palaemon (Keil v: 542.26-27): And now the principle verbs are actives, pas-sives, neuters, commons, and deponents.Donatus (Keil iv: 383.1-2): The classes (genera) of verbs, which are called to-kens (significationes) by others, are five: actives, passives, neuters, deponents, and commons.Servius (Keil iv: 413.35-36): Of verbs there are five classes (genera): actives, passives, neuters, commons, and deponents.Audax (Keil vii: 346.6-7): How many classes (genera) of verbs are there? Five, that is: active, passive, neuter, common, and deponent.Pompeius (Keil v:227.3): The classes (genera) of verbs are these: actives, pas-sives, neuters, commons, and deponents.Consentius (Keil v: 367.14-16): The classes (genera) or tokens (significationes) are five: active as lego scribo, passive as legor scribor, neuter as sto curro, depo-nent as loquor luctor, and common as consolor criminor. -and (iii) to continue the research within Thracian linguistics in order to discover at least two more morphological means of expressing the middle voice in Latin. This will include a form of the verb in Latin corresponding to the so-called 'aorist passive' in Classical Greek which had nothing at all to do with the aorist and is conjugated unconditionally for the active voice.

A Primer of Ecclesiastical Latin

An Answer Key to a Primer of Ecclesiastical Latin: A Supplement to the Text

What Would You Die For? Perpetua's Passion

Getting Started with Latin: Beginning Latin for Homeschoolers and Self-Taught Students of Any Age

Etymological Dictionary of Latin and the Other Italic Languages

Essential Latin Vocabulary: The 1,425 Most Common Words Occurring in the Actual Writings of over 200 Latin Authors

Latin Via Ovid: A First Course

Scribblers, Sculptors, and Scribes: A Companion to Wheelock's Latin and Other Introductory Textbooks

On the Good Life

The Everything Essential Latin Book: All You Need to Learn Latin in No Time

Via Periculosa: A Latin Novella

Cupid and Psyche: An Adaptation of the Story in the Golden Ass of Apuelius

Keep Going with Latin: A Continuation of Getting Started with Latin: Beginning Latin For Homeschoolers and Self-Taught Students of Any Age

Gender and Sexuality in Juvenal's Rome: Satire 2 and Satire 6 Volume 59

A Dictionary of Latin Words and Phrases

A Primer of Medieval Latin: An Anthology of Prose and Verse

Latin by the Natural Method, vol. 2

Basics of Latin: A Grammar with Readings and Exercises from the Christian Tradition

Long Live Latin: The Pleasures of a Useless Language

Latin by the Natural Method, vol. 1

Wisdom From the Old World: 1439 Pithy Latin Words and Phrases to Remember

The Angelus and Regina Caeli in Latin and English

Tragoedia Macbethi: A Translation into Latin of William Shakespeare's Macbeth, as a Playscript in Prose

Amo, Amas, Amat and More: How to Use Latin to Your Own Advantage and to the Astonishment of Others

Beginning Latin: a Guide to the National Latin Exam

Latin in Modern Fiction: Who Says It's a Dead Language?

Learn Latin: A Guide to Learning the Basics of a New Language

The Language of the Elite: High Impact Latin Words to Make You Sound Smart

Ovid's Amores, Book One: A Commentary

The Natural Histories of Pliny the Elder: An Advanced Reader and Grammar Review

Learn Latin While Having Fun! - For Children: KIDS OF ALL AGES - STUDY 100 ESSENTIAL THEMATICS WITH WORD SEARCH PUZZLES - VOL.1 - Uncover How to Impro

An Introduction to Vulgar Latin

Philosophy and Community in Seneca's Prose

Latin for the Illiterati: A Modern Guide to an Ancient Language

Matins Psalter: According to the Benedictine Ritual

The Neo-Latin Reader: Selections from Petrarch to Rimbaud

The Praise Of Folly: Translated By John Wilson With An Introduction By Mrs. P. S. Allen

Latin Made Simple: A Complete Introductory Course in Classical Latin

Speak Latin: First Steps Toward Conversation in the Classroom

Empire and Politics in the Eastern and Western Civilizations

Latin Demystified: A Self Teaching Guide