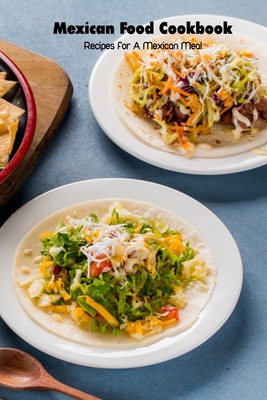 If you are interested with this beautiful country's cousine, you need this book. Because it will show you instructions to make 24 Mexican Dishes You'll Be Making On Repeat.
This book goes with:
- High quality illustrations
- Simple instructions
A food lover will love it!
Get this book and pick some to try today!!!

Mi Cocina: Recipes and Rapture from My Kitchen in Mexico: A Cookbook

The Taco Tuesday Cookbook: 52 Tasty Taco Recipes to Make Every Week the Best Ever

Trejo's Tacos: Recipes and Stories from L.A.: A Cookbook

The Mexican Home Kitchen: Traditional Home-Style Recipes That Capture the Flavors and Memories of Mexico

Oaxaca: Home Cooking from the Heart of Mexico

Yucatán: Recipes from a Culinary Expedition

Ciudad de Mexico: Recipes and Stories from the Heart of Mexico City

Decolonize Your Diet: Plant-Based Mexican-American Recipes for Health and Healing

Taste of Tucson: Sonoran-Style Recipes Inspired by the Rich Culture of Southern Arizona

Nopalito: A Mexican Kitchen [A Cookbook]

My Mexico City Kitchen: Recipes and Convictions [A Cookbook]

The Food of Oaxaca: Recipes and Stories from Mexico's Culinary Capital: A Cookbook

Taco Obsession: Essential Recipes to Celebrate the Flavors of Mexico

Tacos: Recipes and Provocations: A Cookbook

American Tacos: A History and Guide

The Tacos of Texas

My Mexico: A Culinary Odyssey with Recipes

The Tex-Mex Cookbook: A History in Recipes and Photos

Frida's Fiestas: Recipes and Reminiscences of Life with Frida Kahlo: A Cookbook

The Baja California Cookbook: Exploring the Good Life in Mexico

Plant Based Cookbook For Beginners: 600 Healthy Plant-Based Recipes For Everyday

Hartwood: Bright, Wild Flavors from the Edge of the Yucatán

Coyota in the Kitchen: A Memoir of New and Old Mexico

¡Buen Provecho!: Traditional Mexican Flavors from My Cocina to Yours

The Native Mexican Kitchen: A Journey Into Cuisine, Culture, and Mezcal

For Such a Time as This: Flavors and Recipes from My Honduras

Guerrilla Tacos: Recipes from the Streets of L.A. [A Cookbook]

Tex-Mex Cookbook: Traditions, Innovations, and Comfort Foods from Both Sides of the Border

The Ultimate Tortilla Press Cookbook: 125 Recipes for All Kinds of Make-Your-Own Tortillas--And for Burritos, Enchiladas, Tacos, and More

Simple Food, Big Flavor: Unforgettable Mexican-Inspired Recipes from My Kitchen to Yours

The Essential Cuisines of Mexico: A Cookbook

Made in Mexico: The Cookbook: Classic and Contemporary Recipes from Mexico City

Peppers of the Americas: The Remarkable Capsicums That Forever Changed Flavor [A Cookbook]

Tacos, Tortas, and Tamales: Flavors from the Griddles, Pots, and Streetside Kitchens of Mexico

Mexico One Plate at a Time

The Ultimate Z Grills Wood Pellet Grill and Smoker Cookbook: The Easy Recipes To Make Stunning Meals With Your Family And Showing Your Skills At The B

Masa: Techniques, Recipes, and Reflections on a Timeless Staple

Casa Marcela: Recipes and Food Stories of My Life in the Californias

The Taco Cleanse: The Tortilla-Based Diet Proven to Change Your Life

The Fire of Peru: Recipes and Stories from My Peruvian Kitchen

Don't Count the Tortillas: The Art of Texas Mexican Cooking

Foods of the Maya: A Taste of the Yucatan

Plant Based Cookbook For Beginners: 600 Healthy Plant-Based Recipes For Everyday

From the Source - Mexico 1: Authentic Recipes from the People That Know Them the Best

The Spirit of Tequila

False Tongues and Sunday Bread: A Guatemalan and Mayan Cookbook

A Taste of Mexico: The Complete Mexican Cookbook With More Than 500 Authentic Mexican Recipes

The Ultimate Z Grills Wood Pellet Grill and Smoker Cookbook: The Easy Recipes To Make Stunning Meals With Your Family And Showing Your Skills At The B

Mexican Cookbook: Authentic Recipes for Your Homemade Mexican Cuisine. A Wide Selection of The Best Traditional and Modern Recipes, Food

Avocadomania: Everything about Avocados from Aztec Delicacy to Superfood: Recipes, Skincare, Lore, & More

The Siete Table: Nourishing Mexican-American Recipes from Our Kitchen

Her Gift: Generations of Cooking in Our Mexican Kitchen