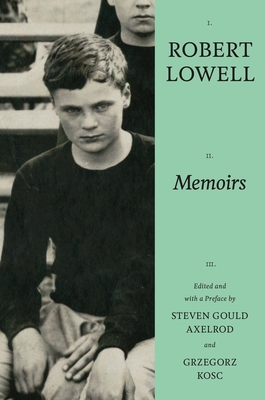 A complete collection of Robert Lowell's autobiographical prose, from unpublished writings about his youth to reflections on the triumphs and confusions of his adult life.

Robert Lowell's Memoirs is an unprecedented literary discovery: the manuscript of Lowell's lyrical evocation of his childhood, which was written in the 1950s and has remained unpublished until now. Meticulously edited by Steven Gould Axelrod and Grzegorz Kosc, it serves as a precursor or companion to his groundbreaking book of poems Life Studies, which signaled a radically new prose-inflected direction in his work, and indeed in American poetry. Memoirs also includes intense depictions of Lowell's mental illness and his determined efforts to recover. It concludes with Lowell's reminiscences of other writers, among them T. S. Eliot, Robert Frost, Ezra Pound, John Berryman, Anne Sexton, Hannah Arendt, and Sylvia Plath. Memoirs demonstrates Lowell's expansive gifts as a prose stylist and his powers of introspection and observation. It provides striking new evidence of the range and brilliance of Lowell's achievement. Includes black-and-white photographs

The Banished Immortal: A Life of Li Bai

If I Die in a Combat Zone: Box Me Up and Ship Me Home

Memories: From Moscow to the Black Sea

The Journals of Sylvia Plath

Letter to the Father/Brief an Den Vater: Bilingual Edition

Writing the Sacred Into the Real

The Journals of John Cheever

A Tale of Love and Darkness

The Republic of Imagination: America in Three Books

The Ministry of Truth: The Biography of George Orwell's 1984

Although of Course You End Up Becoming Yourself: A Road Trip with David Foster Wallace

Building Art: The Life and Work of Frank Gehry

In the Land of Men: A Memoir

The Dog Says How

Ted Hughes: The Life of a Poet

Walter Benjamin: The Story of a Friendship

Out of Africa: And Shadows on the Grass

The Autobiography of Alice B. Toklas

The Seven Good Years: A Memoir

Records of Shelley, Byron, and the Author

The the World of Shakespeare: A 1000 Piece Jigsaw Puzzle