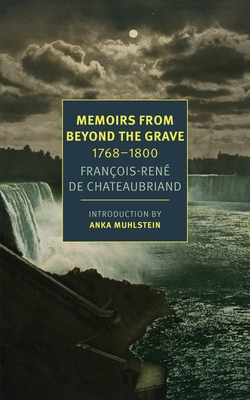 Written over the course of four decades, François-René de Chateaubriand's epic autobiography has drawn the admiration of Baudelaire, Flaubert, Proust, Barthes, and Sebald. Here, in the first books of his massive Memoirs, spanning the years 1768 to 1800, Chateaubriand looks back on the already bygone world of his youth. He recounts the history of his aristocratic family and the first rumblings of the French Revolution. He recalls playing games on the beaches of Saint-Malo, wandering in the woods near his father's castle in Combourg, hunting with King Louis XVI at Versailles, witnessing the first heads carried on pikes through the streets of Paris, meeting with George Washington in Philadelphia, and falling hopelessly in love with a young woman named Charlotte in the small Suffolk town of Bungay. The volume ends with Chateaubriand's return to France after seven years of exile in England. In this new edition (the first unabridged English translation of any portion of the Memoirs to be published in more than a century), Chateaubriand emerges as a writer of great wit and clarity, a self deprecating egotist whose meditations on the meaning of history, memory, and morality are leavened with a mixture of high whimsy and memorable gloom.

Knights and Peasants: The Hundred Years War in the French Countryside

Paris and Her Cathedrals

The Last Baron: The Paris Kidnapping That Brought Down an Empire

Diaghilev's Empire: How the Ballets Russes Enthralled the World

Mummified: The stories behind Egyptian mummies in museums

The War: A Memoir

The Paris Commune: A Brief History

The Riviera Set: Glitz, Glamour, and the Hidden World of High Society

For God and Liberty: Catholicism and Revolution in the Atlantic World, 1790-1861

A Great Improvisation: Franklin, France, and the Birth of America

A Scented Palace: The Secret History of Marie Antoinette's Perfumer

The Armies and Wars of the Sun King 1643-1715: Volume 5: Buccaneers and Soldiers in the Americas

Parisians: An Adventure History of Paris

Rousseau, Burke, and Revolution in France, 1791

A Woman of No Importance: The Untold Story of the American Spy Who Helped Win World War II (Large Print Edition)

The Last Revolutionaries: The Conspiracy Trial of Gracchus Babeuf and the Equals

A Nook in the Temple of Fame: French Military Officers in Persian Service, 1807-1826

Velocipedomania: A Cultural History of the Velocipede in France

The Mapmaker's Wife: A True Tale of Love, Murder, and Survival in the Amazon

Gay Liberation After May '68

The Architecture of Empire: France in India and Southeast Asia, 1664-1962

Robespierre: The Man Who Divides Us the Most

Making Space for the Dead: Catacombs, Cemeteries, and the Reimagining of Paris, 1780-1830

The Invention of the Restaurant: Paris and Modern Gastronomic Culture

Blood Royal: A True Tale of Crime and Detection in Medieval Paris

Paris in Turmoil: A City Between Past and Future

Shadows in the Vineyard: The True Story of the Plot to Poison the World's Greatest Wine

The Story of Modern France: The Kings, the French Revolution, the Napoleonic Wars and the Establishment of Democracy and Liberty

The Discovery of France: A Historical Geography from the Revolution to the First World War

The Beach Beneath the Street: The Everyday Life and Glorious Times of the Situationist International

The Fountain of Latona: Louis XIV, Charles Le Brun, and the Gardens of Versailles

The Hollow Years: France in the 1930s

Medieval Song from Aristotle to Opera

Napoleon's Glance: The Secret of Strategy

The Giant of the French Revolution: Danton, a Life

Matriarchal Societies of the Past and the Rise of Patriarchy: West Asia and Europe

The Stones of Balazuc: A French Village Through Time

Syria and Lebanon 1941: The Allied Fight Against the Vichy French

From Deficit to Deluge: The Origins of the French Revolution

Paris and the Birth of Public Knowledge

Versailles: A Biography of a Palace