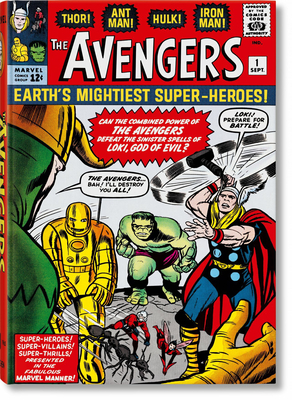 By early 1963 the foundations of the Marvel Universe had been laid. Following the introduction of the Fantastic Four in 1961 came the amazing (Spider-Man), the astonishing (Ant-Man), the strange (Doctor, that is), the incredible (Hulk), the invincible (Iron Man) and the mighty (Thor). Still, Marvel editor in chief Stan Lee realized something was missing. I was writing these characters and I thought it would fun to put them together in a team, he recalled. So Lee and artist Jack Kirby assembled Iron Man, Ant-Man and the Wasp, Thor, and the Hulk to create the Avengers.

Right away it was clear this team was different. If the Fantastic Four were family, then the Avengers were the co-workers you didn't choose. Not everyone got along--the Hulk fought with everyone--but working together they could defeat the baddest of Marvel's bad guys, like Loki, Kang the Conqueror, the Masters of Evil, and Immortus. The lineup was ever changing: The Hulk departed, Captain America joined, and Ant-Man grew up to become Giant-Man. Then, remarkably, villains Hawkeye, Quicksilver, and the Scarlet Witch became heroes--and Avengers--and the group's founding members shockingly departed, leaving Captain America to lead the newly-minted heroes.

Relive the classic early adventures of Avengers Nos. 1-20 in an XXL-sized edition that's bigger than the Hulk's fist, weightier than Thor's hammer, and with more extras than Iron Man's armor. TASCHEN has attempted to create an ideal representation of these books as they were produced at the time of publication. The most pristine pedigreed comics have been cracked open and photographed for reproduction in close collaboration with Marvel and the Certified Guaranty Company. Each page has then been digitally remastered using modern retouching techniques to correct problems with the era's inexpensive, imperfect printing--as if hot off of a world-class 1960s printing press.

Accompanying the stories are an original foreword by Marvel Studios President Kevin Feige and an in-depth history by the Eisner Award-winning writer Kurt Busiek that's illustrated with original art, little-seen photographs, and rare documents. This mighty collection about Earth's Mightiest Heroes is worthy of Tony Stark's library--or yours.

Also available in a Collector's Edition of 1,000 numbered copies.

MARVEL COMICS LIBRARY is an exclusive, long-term collaboration between TASCHEN and Marvel. The rarest classic comics, including Spider-Man, Avengers, and Captain America are meticulously reproduced in their original glory, in extra-large format. The library offers collectors a once-in-a-lifetime opportunity to lay their hands on the world's most desirable comics. Each volume includes an essay by a comic book historian along with hundreds of photos and artifacts, including rare original comic book artwork.

Inventions That Didn't Change the World

Tomboy Style: Beyond the Boundaries of Fashion

Design of the 20th Century

Floppy Disk Fever: The Curious Afterlives of a Flexible Medium

Little Book of Louis Vuitton: The Story of the Iconic Fashion House

The Designer's Dictionary of Color

All-American Ads of the 70s

The Little Book of Balenciaga: The Story of the Iconic Fashion House

Design as an Attitude: New Edition

The Kaufmann Mercantile Guide: How to Split Wood, Shuck an Oyster, and Master Other Simple Pleasures

The Little Book of Chanel by Lagerfeld: The Story of the Iconic Fashion Designer

The Lego Animation Book: Make Your Own Lego Movies!

This Book Is a Planetarium: And Other Extraordinary Pop-Up Contraptions

For the Love of Books: Designing and Curating a Home Library

The Beauty of Everyday Things

All-American Ads of the 80s

Design the Long Life You Love: A Step-By-Step Guide to Love, Purpose, Well-Being, and Friendship

All-American Ads of the 60s

Designerly Ways of Knowing: A Working Inventory of Things a Designer Should Know

Designs for the Pluriverse: Radical Interdependence, Autonomy, and the Making of Worlds

Growing Up Underground: A Memoir of Counterculture New York

The Rules We Break: Lessons in Play, Thinking, and Design

Ruined by Design: How Designers Destroyed the World, and What We Can Do to Fix It

How to Zoom Your Room: Room Rater's Ultimate Style Guide

Little Book of Schiaparelli: The Story of the Iconic Fashion House

The Elements of Graphic Design

X-Men: The Art and Making of the Animated Series

The Well-Loved House: Creating Homes with Color, Comfort, and Drama

Chanel Paperscapes: The Book That Transforms Into a Work of Art

The Secret Language of Maps: How to Tell Visual Stories with Data

Making the Movement: How Activists Fought for Civil Rights with Buttons, Flyers, Pins, and Posters

The Man Who Leapt Through Film: The Art of Mamoru Hosoda

What Can a Body Do?: How We Meet the Built World

Design After Capitalism: Transforming Design Today for an Equitable Tomorrow

The Fundamentals of Interior Design

Picture This: How Pictures Workrevised and Expanded 25th Anniversary Edition

100 Interiors Around the World

Art Deco Complete: The Definitive Guide to the Decorative Arts of the 1920s and 1930s

Just Enough Design: Reflections on the Japanese Philosophy of Hodo-Hodo

How Design Makes the World

Everything Else Is Bric-A-Brac: Notes on Home

Rattan: A World of Elegance and Charm

The Art of Star Wars: The High Republic: (Volume One)

Mexico: The Land of Charm

The Principles of Pretty Rooms

Hermès: Straight from the Horse's Mouth

A Tale of Interiors

Celtic Art: The Methods of Construction

Less and More: The Design Ethos of Dieter Rams

The Elements of a Home: Curious Histories Behind Everyday Household Objects, from Pillows to Forks (Home Design and Decorative Arts Book, Hist

Design Justice: Community-Led Practices to Build the Worlds We Need

Sub-Urbanism and the Art of Memory

Deep Color: The Shades That Shape Our Souls

Hello World: Being Human in the Age of Algorithms

Pink Flamingos and the Yellow Pages: The Stories Behind the Colors of Our World

The Designer's Dictionary of Type

The Anatomy of Type: A Graphic Guide to 100 Typefaces

Remarkable Books: The World's Most Historic and Significant Works

Home Stories: Design Ideas for Making a House a Home

Anatomy of Color: The Story of Heritage Paints & Pigments

Architectural Digest: The Most Beautiful Rooms in the World

Fashion Victims: The Dangers of Dress Past and Present

Japanese Design Since 1945: A Complete Sourcebook

Dragons & Pagodas: A Celebration of Chinoiserie

The Spanish Style House: From Enchanted Andalusia to the California Dream

Do You Read Me?: Bookstores Around the World

Signs and Symbols: An Illustrated Guide to Their Origins and Meanings

A City Is Not a Computer: Other Urban Intelligences

Fractals: On the Edge of Chaos

Blacksmith: Apprentice to Master: Tools & Traditions of an Ancient Craft