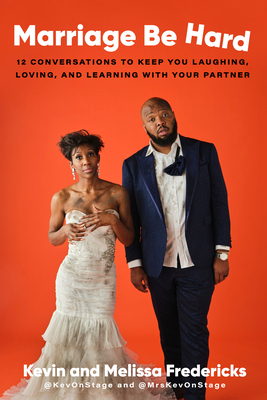 Marriage Be Hard: 12 Conversations to Keep You Laughing, Loving, and Learning with Your Partner

Discover the keys to upholding your vows while staying sane in this hilariously candid guide to relationships, from the husband-and-wife team of comedian Kevin Fredericks and influencer Melissa Fredericks Kev and Melissa are not afraid to tell the truth!--Tabitha Brown, New York Times bestselling author of Feeding the Soul Growing up, Kevin and Melissa Fredericks were taught endless rules around dating, sex, and marriage, but not a lot about what actually makes a relationship work. When they first got married, they felt alone--like every other couple had perfect chemistry while the two of them struggled. There were conversations that they didn't know they needed to have, fears that affected how they related to each other, and seasons of change that put their marriage to the test. Part of their story reads like a Christian fairytale: high school sweethearts, married in college, never sowed any wild oats, with two sons and a thriving marriage. But there's another side of their story: the night Melissa kicked Kevin out of her car after years of communication problems, the time early in their marriage when Kevin bordered on an emotional affair, the way they've used social media and podcasts to conduct a no-holds-barred conversation about forbidden topics like jealousy, divorce, and how to be Christian and sex positive. (Because, as Kevin writes, Your hormones don't care about your religious beliefs. Your hormones want you to subscribe to OnlyFans.) In Marriage Be Hard, the authors provide a hilarious and fresh master class on what it takes to build and maintain a lasting relationship. Drawing on interviews with experts and nearly two decades of marriage, they argue that - Compatibility is overrated.
- Communication is about way more than simply talking.
- Seeing divorce as an option can actually help your marriage.
- There's such a thing as healthy jealousy. Real marriage is not automatic. It ain't no Tesla on the open road. Sometimes it's a stick shift on a hill in the rain with no windshield wipers. But if you get comfortable visiting--and revisiting--the topics that matter, it can transform your bond with your partner and the life you're building together. Written for those tired of unrealistic relationship books--and for anyone wondering if they're the only ones breaking all the rules--Marriage Be Hard is a breath of fresh air and the manual you wish existed after you said I do.

The Five Love Languages: How to Express Heartfelt Commitment to Your Mate

When Parents Part: How Mothers and Fathers Can Help Their Children Deal with Separation and Divorce

Eight Dates: Essential Conversations for a Lifetime of Love

Las Mujeres Que Aman Demasiado / Women Who Love Too Much

Us: Getting Past You and Me to Build a More Loving Relationship

As cinco linguagens do amor - 3a edição

Ace: What Asexuality Reveals about Desire, Society, and the Meaning of Sex

The Seven Principles for Making Marriage Work: A Practical Guide from the Country's Foremost Relationship Expert

Win Your Breakup: How to Be The One That Got Away

Keeping it Hot: The Workbook

Men Are from Mars, Women Are from Venus: The Classic Guide to Understanding the Opposite Sex

Date Night Cookbook and Activities for Couples: Recipes and Games for a Romantic Night in

Why Men Love Bitches: From Doormat to Dreamgirl--A Woman's Guide to Holding Her Own in a Relationship

The ADHD Effect on Marriage: Understand and Rebuild Your Relationship in Six Steps

If We Break: A Memoir of Marriage, Addiction, and Healing

Becoming the One: Heal Your Past, Transform Your Relationship Patterns, and Come Home to Yourself

Overthinking about You: Navigating Romantic Relationships When You Have Anxiety, Ocd, And/Or Depression

How to Not Die Alone: The Surprising Science That Will Help You Find Love

No More MR Nice Guy: A Proven Plan for Getting What You Want in Love, Sex, and Life

Hold Me Tight: Seven Conversations for a Lifetime of Love

Getting Past Your Breakup: How to Turn a Devastating Loss Into the Best Thing That Ever Happened to You

Love and Respect: The Love She Most Desires; The Respect He Desperately Needs

Foreverland: On the Divine Tedium of Marriage

This Is How Your Marriage Ends: A Hopeful Approach to Saving Relationships

Your Sexually Addicted Spouse: How Partners Can Cope and Heal

I Wrote a Book about You

The 5 Love Languages: The Secret to Love That Lasts (Large Print Edition)

Designed to Last: Our Journey of Building an Intentional Home, Growing in Faith, and Finding Joy in the In-Between

The Power of Attachment: How to Create Deep and Lasting Intimate Relationships

Don't Text Your Ex Happy Birthday: And Other Advice on Love, Sex, and Dating

Cinderella, You Bitch: Rescue Your Relationships from the Fairy-Tale Fantasy

This Story Will Change: After the Happily Ever After; A Memoir

Love Unfu*ked: Getting Your Relationship Sh!t Together

Wired for Love: A Neuroscientist's Journey Through Romance, Loss, and the Essence of Human Connection

You're the Cake, The Guy's the Frosting: How loving yourself unconditionally will attract the love you deserve

Single on Purpose: Redefine Everything. Find Yourself First.

How to Be a 3% Man, Winning the Heart of the Woman of Your Dreams

All Down Darkness Wide: A Memoir

The Big Activity Book For Couples

A Lifetime of Love: A Game Plan for Marriage and Family Life

Should I Stay or Should I Go: Surviving a Relationship with a Narcissist

Getting the Love You Want: A Guide for Couples: Third Edition

Wired for Love: How Understanding Your Partner's Brain and Attachment Style Can Help You Defuse Conflict and Build a Secure Relationsh

The State of Affairs: Rethinking Infidelity

Are You Really His Good Thing?

The Great Sex Rescue: The Lies You've Been Taught and How to Recover What God Intended

Can Love Last?: The Fate of Romance Over Time

This Is Not a Pity Memoir

The Seven Levels of Intimacy: The Art of Loving and the Joy of Being Loved

My Life According to Rock Band: Or Fifty-Eight Short Stories About Life, Love, and the Greatest Video Game Ever Made

Facing Love Addiction: Giving Yourself the Power to Change the Way You Love

Moms Moving on: Real-Life Advice on Conquering Divorce, Co-Parenting Through Conflict, and Becoming Your Best Self

Relationship Goals: How to Win at Dating, Marriage, and Sex

How to Be an Adult in Relationships: The Five Keys to Mindful Loving

It's Not Me, It's You: Break the Blame Cycle. Relationship Better.

The 5 Love Languages Military Edition: The Secret to Love That Lasts

What I Love about You

A Love Journal: 100 Things I Love about You

What Makes Love Last?: How to Build Trust and Avoid Betrayal

This Is Me Letting You Go

Blended and Redeemed: The Go-To Field Guide for the Modern Stepfamily

Act Like a Lady, Think Like a Man: What Men Really Think about Love, Relationships, Intimacy, and Commitment

Sis, Don't Settle: How to Stay Smart in Matters of the Heart

The Spirit of Intimacy: Ancient Teachings in the Ways of Relationships

The Little Book of Pride: Love Is Love

Stop Praying for a Good Man: My Discernment Journey

Hold the Line: The Essential Guide to Protecting Your Law Enforcement Relationship

Created to Be His Help Meet: 10th Anniversary Edition-Revised, Expanded and Updated

Real Life, Real Love: Life Lessons on Joy, Pain & the Magic That Holds Us Together

The Pursuit of Marriage Oneness: The Key to Marital Success

I Want This to Work: An Inclusive Guide to Navigating the Most Difficult Relationship Issues We Face in the Modern Age

I Owe You Sex: The Gift That Keeps on Giving ... to Both of You

After the Affair, Third Edition: Healing the Pain and Rebuilding Trust When a Partner Has Been Unfaithful

The No-Nonsense Guide to Divorce: Getting Through and Starting Over

One Question a Day for You & Me: A Three-Year Journal: Daily Reflections for Couples

More Than Words: The Science of Deepening Love and Connection in Any Relationship

The Proper Care and Feeding of Husbands

The Lonely Hunter: How Our Search for Love Is Broken: A Memoir

How We Love, Expanded Edition: Discover Your Love Style, Enhance Your Marriage

Theology of Home: Finding the Eternal in the Everyday

I'm More Dateable Than a Plate of Refried Beans: And Other Romantic Observations

This Might Be Too Personal: And Other Intimate Stories

Not Mary Not Roe: The Survival Story of a Reluctant Teen Mom

Not Mary Not Roe: The Survival Story of a Reluctant Teen Mom

More Than Two: A Practical Guide to Ethical Polyamory

The Joy of Sex

Rumi: The Book of Love: Poems of Ecstasy and Longing

The Relationship Cure: A 5 Step Guide to Strengthening Your Marriage, Family, and Friendships

Pimpology: The 48 Laws of the Game

The Man God Has For You: 7 traits to Help You Determine Your Life Partner

Good Chemistry: The Science of Connection from Soul to Psychedelics

Divorce After 50: Your Guide to the Unique Legal and Financial Challenges

Things I Wish I'd Known Before We Got Married

Calling in the One Revised and Expanded: 7 Weeks to Attract the Love of Your Life

Love in the Time of Contagion: A Diagnosis

Soul Mates and Twin Flames: The Spiritual Dimension of Love and Relationships

The Man's Guide to Women: Scientifically Proven Secrets from the Love Lab about What Women Really Want

Women Who Love Too Much: When You Keep Wishing and Hoping He'll Change

I Hear You: The Surprisingly Simple Skill Behind Extraordinary Relationships

Getting It: A Guide to Hot, Healthy Hookups and Shame-Free Sex

How to Avoid Falling in Love with a Jerk: The Foolproof Way to Follow Your Heart Without Losing Your Mind

#Staymarried: A Couples Devotional: 30-Minute Weekly Devotions to Grow in Faith and Joy from I Do to Ever After

Why I Love You: A Journal of Us

Love and Soul-Making: Searching the Depths of Romantic Love

Best Self: Be You, Only Better

Queer Sex: A Trans and Non-Binary Guide to Intimacy, Pleasure and Relationships

101 Questions to Ask Before You Get Remarried

The Highly Sensitive Person in Love: Understanding and Managing Relationships When the World Overwhelms You

I Hear You: The Surprisingly Simple Skill Behind Extraordinary Relationships

The Smart Girl's Guide to Polyamory: Everything You Need to Know about Open Relationships, Non-Monogamy, and Alternative Love

I Wrote a Book about Us