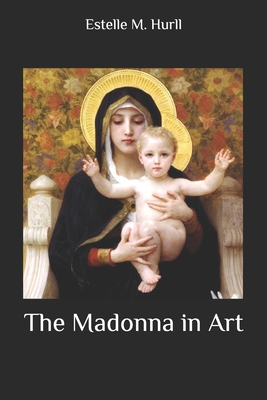 he first Madonna pictures known to us are of the portrait style, and are of Byzantine or Greek origin. They were brought to Rome and the western empire from Constantinople (the ancient Byzantium), the capital of the eastern empire, where a new school of Christian art had developed out of that of ancient Greece. Justinian's conquest of Italy sowed the new art-seed in a fertile field, where it soon took root and multiplied rapidly. There was, however, little or no improvement in the type for a long period; it remained practically unchanged till the thirteenth century. Thus, while a Byzantine Madonna is to be found in nearly every old church in Italy, to see one is to see all. They are half-length figures against a background of gold leaf, at first laid on solidly, or, at a somewhat later date, studded with cherubs. The Virgin has a meagre, ascetic countenance, large, ill-shaped eyes, and an almost peevish expression; her head is draped in a heavy, dark blue veil, falling in stiff folds.Unattractive as such pictures are to us from an artistic standpoint, they inspire us with respect if not with reverence. Once objects of mingled devotion and admiration, they are still regarded with awe by many who can no longer admire. Their real origin being lost in obscurity, innumerable legends have arisen, attributing them to miraculous agencies, and also endowing them with power to work miracles. There is an early and widespread tradition, imported with the Madonna from the East, which makes St. Luke a painter. It is said that he painted many portraits of the Virgin, and, naturally, all the churches possessing old Byzantine pictures claim that they are genuine works from the hand of the evangelist. There is one in the Ara Coeli at Rome, and another in S. Maria in Cosmedino, of which marvellous tales are told, besides others of great sanctity in St. Mark's, Venice, and in Padua.It would not be interesting to dwell, in any detail, upon these curious old pictures. We would do better to take our first example from the art which, though founded on Byzantine types, had begun to learn of nature. Such a picture we find in the Venice Academy, by Jacopo Bellini, painted at the beginning of the fifteenth century, somewhat later than any corresponding picture could have been found elsewhere in Italy, as Venice was chronologically behind the other art schools. The background is a glory of cherub heads touched with gold hatching. Both mother and child wear heavy nimbi, ornamented with gold. These points recall Byzantine work; but the gentler face of the Virgin, and the graceful fall of her drapery, show that we are in a different world of art. The child is dressed in a little tunic, in the primitive method.

The Madonna in Art: Large Print

The Madonna In Art

The Madonna In Art: Large Print

The Laws Guide to Nature Drawing and Journaling

Love in the Wild Board Book

After Dinner Amusements: How Well Do You Know Me?: 50 Questions for Family and Friends (Dinner Party Gifts, Games for Adults, Games for Dinner Parties

Hokusai Hiroshige and Others

642 Tiny Things to Draw: (Drawing for Kids, Drawing Books, How to Draw Books)

2 of a Kind Double Ended Color

After Dinner Amusements Which

Bookmarks Are for Quitters Beaded Bookmark

What is narrative therapy?: An easy-to-read introduction

Teen Titans Go Coloring book: Exclusive Illustrations For Adults and Kids, A Perfect Coloring Book For Everyone To Color, Develop Critical Skills, A

A Narrative of the Life of David Crockett

Bookmarks Are for Quitters Socks

Crystals: The Stone Deck: 78 Crystals to Energize Your Life (Crystals and Healing Stones, Crystals for Beginners, Protection Crystals and Stones

Prism Oracle: Tap Into Your Intuition with the Magic of Color

The Spells Deck: 78 Charms, Remedies, and Rituals for the Modern Mystic

Flying Pig Plush: A Companion to the Children's Book Maybe

The Lost Ways: Prepare To Survive In Emergencies

Deep and deliberate delegation: A new art for unleashing talent and winning back time

The Power of Character Strengths: Appreciate and Ignite Your Positive Personality

After Dinner Amusements Do You