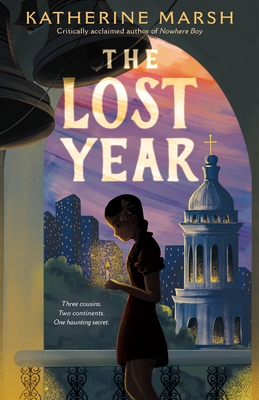 The Lost Year: A Survival Story of the Ukrainian Famine

From the author of Nowhere Boy - called a resistance novel for our times by The New York Times - comes a brilliant middle-grade survival story that traces a harrowing family secret back to the Holodomor, a terrible famine that devastated Soviet Ukraine in the 1930s.

Thirteen-year-old Matthew is miserable. His journalist dad is stuck overseas indefinitely, and his mom has moved in his one-hundred-year-old great-grandmother to ride out the pandemic, adding to his stress and isolation. But when Matthew finds a tattered black-and-white photo in his great-grandmother's belongings, he discovers a clue to a hidden chapter of her past, one that will lead to a life-shattering family secret. Set in alternating timelines that connect the present-day to the 1930s and the US to the USSR, Katherine Marsh's latest novel sheds fresh light on the Holodomor - the horrific famine that killed millions of Ukrainians, and which the Soviet government covered up for decades. An incredibly timely, page-turning story of family, survival, and sacrifice, inspired by Marsh's own family history, The Lost Year is perfect for fans of Ruta Sepetys' Between Shades of Gray and Alan Gratz's Refugee.

The Door by the Staircase

Demons at My Doorstep: The search for my donor father...

A Traveller in Time

The Door of No Return

Island of the Blue Dolphins: A Newbery Award Winner

The First Notes: The Story of Do, Re, Mi

Rescue on the Oregon Trail (Ranger in Time #1): Volume 1

Where the Red Fern Grows

The War That Saved My Life

We Dream of Space: A Newbery Honor Award Winner

The Witch of Blackbird Pond: A Newbery Award Winner

Narwhal on a Sunny Night

A Big Day for Baseball

Sparrows in the Wind

The Sign of the Beaver: A Newbery Honor Award Winner

How I Became a Ghost: A Choctaw Trail of Tears Story

Henry's Freedom Box: A True Story from the Underground Railroad

Charlie Thorne and the Last Equation

A Land of Books: Dreams of Young Mexihcah Word Painters

Standing in the Need of Prayer: A Modern Retelling of the Classic Spiritual

A Seed in the Sun

The Invention of Hugo Cabret

The Windeby Puzzle: History and Story

Finding Winnie: The True Story of the World's Most Famous Bear

A Place to Hang the Moon

Out of the Dust (Scholastic Gold)

Mary and the Trail of Tears: A Cherokee Removal Survival Story

Twas the Night Before Pride

Squanto's Journey: The Story of the First Thanksgiving

My Nest of Silence

To the Future, Ben Franklin!

Little House in the Big Woods

Little House in the Big Woods

Patty Reed's Doll: The Story of the Donner Party

The Inquisitor's Tale: Or, the Three Magical Children and Their Holy Dog

The Civil War of Amos Abernathy

All Aboard the Schooltrain: A Little Story from the Great Migration

The Star That Always Stays

Tonight on the Titanic

Skin of the Sea

An Elephant in the Garden: Inspired by a True Story

Love in the Library

Beyond the Bright Sea

A Ghost Tale for Christmas Time

King Arthur and His Knights of the Round Table

World Made of Glass

The War I Finally Won

Louisa June and the Nazis in the Waves

The Cross of Lead

Terrible Things: An Allegory of the Holocaust

The Best Kind of Mooncake

Sisters of the Lost Marsh

An Orange for Frankie

The Patron Thief of Bread

Moonwalk: The First Trip to the Moon

I Survived the Battle of D-Day, 1944 (Large Print Edition)

By the Great Horn Spoon

Yellow Butterfly: A Story from Ukraine

Balto of the Blue Dawn

The Seventh Most Important Thing

Where the Red Fern Grows

A Place to Hang the Moon

King Bidgood's in the Bathtub

Annabelle & Aiden: OH MY GODS! A History of Belief