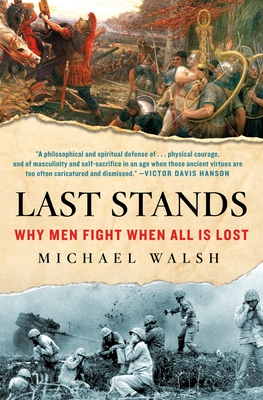 A philosophical and spiritual defense of the premodern world, of the tragic view, of physical courage, and of masculinity and self-sacrifice in an age when those ancient virtues are too often caricatured and dismissed.
--Victor Davis Hanson

Award-winning author Michael Walsh celebrates the masculine attributes of heroism that forged American civilization and Western culture by exploring historical battles in which soldiers chose death over dishonor in Last Stands: Why Men Fight When All Is Lost. In our contemporary era, men are increasingly denied their heritage as warriors. A survival instinct that's part of the human condition, the drive to wage war is natural. Without war, the United States would not exist. The technology that has eased manual labor, extended lifespans, and become an integral part of our lives and culture has often evolved from wartime scientific advancements. War is necessary to defend the social and political principles that define the virtues and freedoms of America and other Western nations. We should not be ashamed of the heroes who sacrificed their lives to build a better world. We should be honoring them. The son of a Korean War veteran of the Inchon landing and the battle of the Chosin Reservoir with the U.S. Marine Corps, Michael Walsh knows all about heroism, valor, and the call of duty that requires men to fight for something greater than themselves to protect their families, fellow countrymen, and most of all their fellow soldiers. In Last Stands, Walsh reveals the causes and outcomes of more than a dozen battles in which a small fighting force refused to surrender to a far larger force, often dying to the last man. From the Spartans' defiance at Thermopylae and Roland's epic defense of Charlemagne's rear guard at Ronceveaux Pass, through Santa Anna's siege of the Alamo defended by Davy Crockett and Jim Bowie to the skirmish at Little Big Horn between Crazy Horse's Sioux nation and George Armstrong Custer's Seventh Calvary, to the Soviets' titanic struggle against the German Wehrmacht at Stalingrad, and more, Walsh reminds us all of the debt we owe to heroes willing to risk their lives against overwhelming odds--and how these sacrifices and battles are not only a part of military history but our common civilizational heritage.

The Bomber Mafia: A Dream, a Temptation, and the Longest Night of the Second World War

The Civil War: A Narrative: Volume 1: Fort Sumter to Perryville

38 Nooses: Lincoln, Little Crow, and the Beginning of the Frontier's End

Confluence: A History of Fort Snelling

First to Fight: An Inside View of the U.S. Marine Corps

The Shining Sea: David Porter and the Epic Voyage of the U.S.S. Essex During the War of 1812

Hue 1968: A Turning Point of the American War in Vietnam

A Crisis of Peace: George Washington, the Newburgh Conspiracy, and the Fate of the American Revolution

American Creation: Triumphs and Tragedies in the Founding of the Republic

The Bomber Mafia: A Dream, a Temptation, and the Longest Night of the Second World War

Countdown bin Laden: The Untold Story of the 247-Day Hunt to Bring the MasterMind of 9/11 to Justice

Liberty Is Sweet: The Hidden History of the American Revolution

The Indispensables: The Diverse Soldier-Mariners Who Shaped the Country, Formed the Navy, and Rowed Washington Across the Delaware

Turn the Ship Around!: A True Story of Turning Followers Into Leaders

Wheels Down: Adjusting to Life After Deployment

Ends of War: The Unfinished Fight of Lee's Army After Appomattox

Boeing B-47 Stratojet & B-52 Stratofortress: Origins and Evolution

Code Over Country: The Tragedy and Corruption of Seal Team Six

The Unknowns: The Untold Story of America's Unknown Soldier and Wwi's Most Decorated Heroes Who Brought Him Home

The Silver Waterfall: How America Won the War in the Pacific at Midway

Bunker Hill: A City, a Siege, a Revolution

The Coldest Winter: America and the Korean War

Andrew Jackson and the Miracle of New Orleans: The Battle That Shaped America's Destiny

First Casualty: The Untold Story of the CIA Mission to Avenge 9/11

The British Are Coming: The War for America, Lexington to Princeton, 1775-1777

The Unknowns: The Untold Story of America's Unknown Soldier and Wwi's Most Decorated Heroes Who Brought Him Home

Presidents of War: The Epic Story, from 1807 to Modern Times

The Mission, the Men, and Me: Lessons from a Former Delta Force Commander

The Last Stand: Custer, Sitting Bull, and the Battle of the Little Bighorn

Fierce Valor: The True Story of Ronald Speirs and His Band of Brothers

War Is a Racket: The Antiwar Classic by America's Most Decorated Soldier

The Last Stand of Fox Company: A True Story of U.S. Marines in Combat

War and American Life: Reflections on Those Who Serve and Sacrifice

Six Frigates: The Epic History of the Founding of the U.S. Navy

Combat To College: Applying the Military Mentality to the Classroom: How to Succeed as a Student Veteran

Operation Pineapple Express: The Incredible Story of a Group of Americans Who Undertook One Last Mission and Honored a Promise in Afghanistan

The Heart of Hell: The Soldiers' Struggle for Spotsylvania's Bloody Angle

The Finest Hours: The True Story of the U.S. Coast Guard's Most Daring Sea Rescue

Fields of Honor: Pivotal Battles of the Civil War

Atlas of the Civil War: A Complete Guide to the Tactics and Terrain of Battle

With Honor and Integrity: Transgender Troops in Their Own Words

Books on the American Civil War Era: A Critical Bibliography

The Bomber Mafia: A Dream, a Temptation, and the Longest Night of the Second World War (Large Print Edition)

Texian Iliad: A Military History of the Texas Revolution, 1835-1836

On Desperate Ground: The Epic Story of Chosin Reservoir--The Greatest Battle of the Korean War

The Force Behind the Forces: Stories of Brave Indian Army Wives

Black Hearts: One Platoon's Descent Into Madness in Iraq's Triangle of Death

Topgun: The Legacy: The Complete History of Topgun and Its Impact on Tactical Aviation

Admiral Chester W. Nimitz: The Life and Legacy of the U.S. Pacific Fleet's Commander in Chief during World War II

Through the Valley: My Captivity in Vietnam

Tiger in the Sea: The Ditching of Flying Tiger 923 and the Desperate Struggle for Survival

Masters of the Air: America's Bomber Boys Who Fought the Air War Against Nazi Germany

Graduating Present: The Vietnam War & The Class of '66:

The Longest Winter: The Battle of the Bulge and the Epic Story of World War II's Most Decorated Platoon

Voyage to the CROSSROADS

The Buffalo Soldiers: A Narrative of the Black Cavalry in the West, Revised Edition

When Books Went to War: The Stories That Helped Us Win World War II

SAS and Special Forces Mental Toughness Training: How to Improve Your Mind's Strength and Manage Stress

In Harm's Way: The Sinking of the USS Indianapolis and the Extraordinary Story of Its Survivors

Citizen Soldiers: The U S Army from the Normandy Beaches to the Bulge to the Surrender of Germany

Kill Anything That Moves: The Real American War in Vietnam