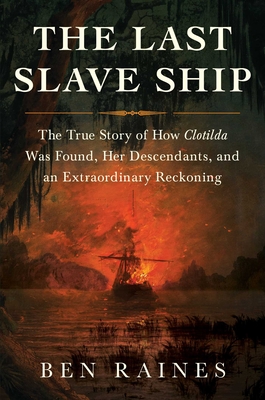 The incredible true story of the last ship to carry enslaved people to America, the remarkable town its survivors founded after emancipation, and the complicated legacy their descendants carry with them to this day--by the journalist who discovered the ship's remains. Fifty years after the Atlantic slave trade was outlawed, the Clotilda became the last ship in history to bring enslaved Africans to the United States. The ship was scuttled and burned on arrival to hide evidence of the crime, allowing the wealthy perpetrators to escape prosecution. Despite numerous efforts to find the sunken wreck, Clotilda remained hidden for the next 160 years. But in 2019, journalist Ben Raines made international news when he successfully concluded his obsessive quest through the swamps of Alabama to uncover one of our nation's most important historical artifacts. Traveling from Alabama to the ancient African kingdom of Dahomey in modern-day Benin, Raines recounts the ship's perilous journey, the story of its rediscovery, and its complex legacy. Against all odds, Africatown, the Alabama community founded by the captives of the Clotilda, prospered in the Jim Crow South. Zora Neale Hurston visited in 1927 to interview Cudjo Lewis, telling the story of his enslavement in the New York Times bestseller Barracoon. And yet the haunting memory of bondage has been passed on through generations. Clotilda is a ghost haunting three communities--the descendants of those transported into slavery, the descendants of their fellow Africans who sold them, and the descendants of their American enslavers. This connection binds these groups together to this day. At the turn of the century, descendants of the captain who financed the Clotilda's journey lived nearby--where, as significant players in the local real estate market, they disenfranchised and impoverished residents of Africatown. From these parallel stories emerges a profound depiction of America as it struggles to grapple with the traumatic past of slavery and the ways in which racial oppression continue to this day. And yet, at its heart, The Last Slave Ship remains optimistic--an epic tale of one community's triumphs over great adversity and a celebration of the power of human curiosity to uncover the truth about our past and heal its wounds.

Deer Creek Drive: A Reckoning of Memory and Murder in the Mississippi Delta

The Last Ride: Murder, Money, and the Sensational Trial that Captivated Nashville

Isaac's Storm: A Man, a Time, and the Deadliest Hurricane in History

The Last Castle: The Epic Story of Love, Loss, and American Royalty in the Nation's Largest Home

Wilmington's Lie (Winner of the 2021 Pulitzer Prize): The Murderous Coup of 1898 and the Rise of White Supremacy

The Gulf: The Making of an American Sea

New Orleans Then and Now(r)

Rising Tide: The Great Mississippi Flood of 1927 and How It Changed America

The Cuban Sandwich: A History in Layers

Devil in the Grove: Thurgood Marshall, the Groveland Boys, and the Dawn of a New America

Emmett Till: The Murder That Shocked the World and Propelled the Civil Rights Movement

The Deepest South of All: True Stories from Natchez, Mississippi

The Hemingses of Monticello: An American Family

What You Are Getting Wrong about Appalachia

Freedom's Dominion: A Saga of White Resistance to Federal Power

The Year of Dangerous Days: Riots, Refugees, and Cocaine in Miami 1980

Bubble in the Sun: The Florida Boom of the 1920s and How It Brought on the Great Depression

The Hidden History of East Tennessee

Rise and Decline of the Redneck Riviera: An Insider's History of the Florida-Alabama Coast

Art of the State: Celebrating the Visual Art of North Carolina

The Southernization of America: A Story of Democracy in the Balance

Veranda at Home in the South: Interior Design Reimagined

Cure: New Orleans Drinks and How to Mix 'em from the Award-Winning Bar

A Kingdom Strange: The Brief and Tragic History of the Lost Colony of Roanoke

Daughter of the White River:: Depression-Era Treachery and Vengeance in the Arkansas Delta

Unc A to Z: What Every Tar Heel Needs to Know about the First State University

Legacy of the New Farmers of America

City of a Million Dreams: A History of New Orleans at Year 300

The Emancipation Circuit: Black Activism Forging a Culture of Freedom

The Confederate Military Forces in the Trans-Mississippi West, 1861-1865: A Study in Command

Hill Women: Finding Family and a Way Forward in the Appalachian Mountains

The World That Made New Orleans: From Spanish Silver to Congo Square

F Is for Florida

Necropolis: Disease, Power, and Capitalism in the Cotton Kingdom

Hidden History of the Florida Keys

An Uncertaine Rumor of Land: New Thoughts on the English Founding of Virginia's Eastern Shore

A Stranger Among Saints: Stephen Hopkins, the Man Who Survived Jamestown and Saved Plymouth

Breaking Barriers: A View from the Bench

Drayton Hall Stories: A Place and Its People

Confessions of a Southern Beauty Queen

American Fire: Love, Arson, and Life in a Vanishing Land

The Paper Plate Escape: The Prison Break that Broke the System

This Used to Be Nashville

Ramp Hollow: The Ordeal of Appalachia

Florida: A History in Pictures

Hammer and Hoe: Alabama Communists During the Great Depression

The French Quarter: An Informal History of the New Orleans Underworld

The Huguenot Family of Pierre Peter Poitevint: His Ascendants and Descendants from France to the Carolinas and Beyond

S Is for Southern: A Guide to the South, from Absinthe to Zydeco

Editors of Garden and Gun

The Story of Becoming Piney Flats

The Vapors: A Southern Family, the New York Mob, and the Rise and Fall of Hot Springs, America's Forgotten Capital of Vice

South to America: A Journey Below the Mason-Dixon to Understand the Soul of a Nation (Large Print Edition)

The Poetic Justice: A Memoir

Call My Name, Clemson: Documenting the Black Experience in an American University Community

Praying for Sheetrock: A Work of Nonfiction

Shaking Up Prohibition in New Orleans: Authentic Vintage Cocktails from A to Z

The Book of the Dead

I Saw Death Coming: A History of Terror and Survival in the War Against Reconstruction

Apostles of Disunion: Southern Secession Commissioners and the Causes of the Civil War

Twilight in Hazard: An Appalachian Reckoning

Africans in Colonial Louisiana: The Development of Afro-Creole Culture in the Eighteenth-Century

Fifteen Hurricanes That Changed the Carolinas: Powerful Storms, Climate Change, and What We Do Next

The Wvu Coed Murders: Who Killed Mared and Karen?

1 Dead in Attic: After Katrina

A Punkhouse in the Deep South: The Oral History of 309

Empire of Sin: A Story of Sex, Jazz, Murder, and the Battle for Modern New Orleans

The Lost Colony and Hatteras Island

Grain and Fire: A History of Baking in the American South

Beale Street Dynasty: Sex, Song, and the Struggle for the Soul of Memphis

Crapalachia: A Biography of a Place

The Jewish Community of Northern Virginia

I Saw You in New Orleans: The Street Photography of a Classic American City

Graveyard of the Atlantic: Shipwrecks of the North Carolina Coast

Race Against Time: A Reporter Reopens the Unsolved Murder Cases of the Civil Rights Era

Why White Liberals Fail: Race and Southern Politics from FDR to Trump

Above New Orleans: Roofscapes of the Crescent City

The Invisible War: African American Anti-Slavery Resistance from the Stono Rebellion Through the Seminole Wars

A History of the Ozarks, Volume 3: The Ozarkers Volume 3

Southern and Smoked: Cajun Cooking Through the Seasons

Africatown: America's Last Slave Ship and the Community It Created

Secret Memphis: A Guide to the Weird, Wonderful, and Obscure

Slaves Without Masters: The Free Negro in the Antebellum South

Wilmington's Lie (Winner of the 2021 Pulitzer Prize): The Murderous Coup of 1898 and the Rise of White Supremacy

NC 12: Gateway to the Outer Banks

Truevine: Two Brothers, a Kidnapping, and a Mother's Quest: A True Story of the Jim Crow South

The Tragedy and the Triumph of Phenix City Alabama

Mississippi Barking: Hurricane Katrina and a Life That Went to the Dogs

Pirates and Buried Treasures of Florida

Ninety Miles and a Lifetime Away: Memories of Early Cuban Exiles

The Provincials: A Personal History of Jews in the South

A History of Nashville's Warner Parks

The Axeman of New Orleans: The True Story

Dismal Freedom: A History of the Maroons of the Great Dismal Swamp

Fourteenth Colony: The Forgotten Story of the Gulf South During America's Revolutionary Era

Life on the Mississippi

The State You're In: Florida Men, Florida Women, and Other Wildlife

Out in the Rural: A Mississippi Health Center and Its War on Poverty

The 1895 Segregation Fight in South Carolina