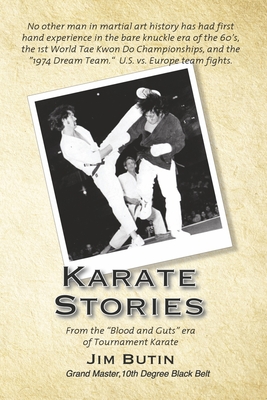 Karate Stories reflects on the Blood and Guts are of Tournament Karate as documented by Grand Master 10th Degree Black Belt, Jim Butin with humor and insight. Gary Lee, the curator of the Sport Karate Museum in Houston Texas stated. No other man in martial art history has had first-hand experience in the bare knuckle era of the 60's, the 1st World Tae Kwon Do Championships, and the '1974 Dream Team' (which included Jim Butin, Superfoot Bill Walace, Joe Lewis, Jeff Smith and Howard Jackson) and the U.S., vs, Europe team fights. In my experience, I have been blessed to be a part of martial arts history in the U.S. since 1966. As a 16-year-old high school student starting classes with Master J. Pat Burleson in Ft. Worth, Texas, I was like a sponge from my very first class. This book also pays honor to his longtime friend and Mentor J. Pat Burleson. History records J. Pat Burleson as America's karate pioneer and Father of all karate champions.

Beyond the Fighting: Proven Success Guidelines for Operating a Successful Martial Arts School!