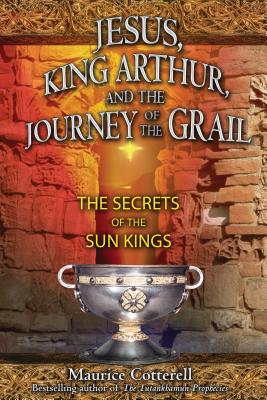 Jesus, King Arthur, and the Journey of the Grail: The Secrets of the Sun Kings

Reveals how the super-science of the sun and the higher orders of spirituality are concealed and contained in the Holy Grail - Connects the discovery of 4,000-year-old Celtic mummies in China with the transmission of this ancient knowledge - Documents the truth of the Holy Grail's connection with King Arthur and Joseph of Arimathea - Confirms the pedigree of the Grail using secret information from the Mayan Pyramid of Inscriptions in Mexico and the Gateway of the Sun in Peru Using the same knowledge that enabled him to break the codes of the Mayas, Peruvians, Egyptians, and Chinese, Maurice Cotterell now follows the migration of the Celts 4,000 years ago from Asia, across Europe, to Ireland. His account of this epic journey together with his knowledge of the secret codes of the Celts help him to identify and locate the Holy Grail, the actual cup used by Christ and his disciples at the Last Supper. The author explains the true story of the Grail: how it contains the secret super-science of the sun and the higher orders of spirituality; how it was carried to England by Joseph of Arimathea; how in A.D. 453 it was found by King Arthur, who engraved it with the same esoteric information found on the Pyramid of Inscriptions in Palenque, Mexico, and the Gateway of the Sun at Tiahuanaco in ancient Peru. His discoveries reveal that the Grail does actually radiate light, in accordance with the Arthurian legends, proving that the so-called legends are actually based on fact. The author goes on to show how the holy cup was passed for safekeeping to the monks of Lindisfarne, who copied the secrets of the Grail into the Lindisfarne Gospels and the Book of Kells. Fleeing from Viking raids, the monks carried their treasures to Ireland, explaining how the cup found its way to the Dublin Museum--where it rests today.

The Black Arts: A Concise History of Witchcraft, Demonology, Astrology, Alchemy, and Other Mystical Practices Throughout the Ages

The Convoluted Universe: Book One

12th Planet: Book I of the Earth Chronicles

The Trigger: The Lie That Changed the World

The Day After Roswell

Species with Amnesia: Our Forgotten History

Fingerprints of the Gods: The Evidence of Earth's Lost Civilization

Human Race Get Off Your Knees: The Lion Sleeps No More

The Ra Material: Law of One: 40th-Anniversary Boxed Set

Study Edition The Emerald Tablets of Thoth The Atlantean

Mary Magdalene Revealed: The First Apostle, Her Feminist Gospel & the Christianity We Haven't Tried Yet

The Unidentified: Mythical Monsters, Alien Encounters, and Our Obsession with the Unexplained

Saucers, Spooks and Kooks: UFO Disinformation in the Age of Aquarius

The Kybalion: A Study of the Hermetic Philosophy of Ancient Egypt and Greece

Divine Animals Oracle: Deep Wisdom from the Most Sacred Beings in Existence

Inside the Earth- The Second Tunnel

The Secret Destiny of America

Occult Secrets of Vril: Goddess Energy and the Human Potential

Mystery of Egypt - The First Tunnel

Viral Bs: Medical Myths and Why We Fall for Them

The Protocols of the Learned Elders of Zion

Cryptozoology A to Z: The Encyclopedia of Loch Monsters Sasquatch Chupacabras and Other Authentic M

Under the Sphinx: the Search for the Hieroglyphic Key to the Real Hall of Records.

America Before: The Key to Earth's Lost Civilization

Escaping from Eden: Does Genesis Teach That the Human Race Was Created by God or Engineered by Ets?

Making Contact: Preparing for the New Realities of Extraterrestrial Existence

Transylvanian Moonrise: A Secret Initiation in the Mysterious Land of the Gods

Inside the Black Vault: The Government's UFO Secrets Revealed

A Lot of People Are Saying: The New Conspiracism and the Assault on Democracy

Unanswered Questions: What the September Eleventh Families Asked and the 9/11 Commission Ignored

Magicians of the Gods: Updated and Expanded Edition - Sequel to the International Bestseller Fingerprints of the Gods

Alien World Order: The Reptilian Plan to Divide and Conquer the Human Race

Discover Atlantis: A Guide to Reclaiming the Wisdom of the Ancients

Unearthing the Lost World of the Cloudeaters: Compelling Evidence of the Incursion of Giants, Their Extraordinary Technology, and Imminent Return

Edgar Cayce on the Akashic Records: The Book of Life

The Illuminati: The Secret Society That Hijacked the World

Tarot for Beginners: A Holistic Guide to Using the Tarot for Personal Growth and Self Development

The Conspiracy Book: A Chronological Journey Through Secret Societies and Hidden Histories

Serpent in the Sky: The High Wisdom of Ancient Egypt

The Ancient Giants Who Ruled America: The Missing Skeletons and the Great Smithsonian Cover-Up

Angels of Atlantis Oracle: Receive Inspiration and Healing from the Angelic Kingdoms

The Most Dangerous Book in the World: 9/11 as Mass Ritual

The Doctrine and Ritual of High Magic: A New Translation

The 10 Greatest Conspiracies of All Time: Decoding History's Unsolved Mysteries

Chariots of the Gods

Unanswered Questions: What the September Eleventh Families Asked and the 9/11 Commission Ignored

Prolonging the Agony: How the Anglo-American Establishment Deliberately Extended WWI by Three-And-A-Half Years.

Coup in Dallas: The Decisive Investigation Into Who Killed JFK

A Lie Too Big to Fail: The Real History of the Assassination of Robert F. Kennedy

Pawns in the Game

JFK to 911 Everything Is a Rich Man's Trick

The Bigfoot Book: The Encyclopedia of Sasquatch, Yeti and Cryptid Primates

The Field: The Quest for the Secret Force of the Universe

The Gods Never Left Us: The Long Awaited Sequel to the Worldwide Best-Seller Chariots of the Gods

The Morning of the Magicians: Secret Societies, Conspiracies, and Vanished Civilizations

The Ankh: African Origin of Electromagnetism

The Rise of the Fourth Reich: The Secret Societies That Threaten to Take Over America

The Way of the Essenes: Christ's Hidden Life Remembered

The Assassination of Robert F. Kennedy: Crime, Conspiracy and Cover-Up: A New Investigation

An Illustrated History of UFOs

The Templar Mission to Oak Island and Beyond: Search for Ancient Secrets: The Shocking Revelations of a 12th Century Manuscript

The Hynek UFO Report: The Authoritative Account of the Project Blue Book Cover-Up

The Christ Conspiracy: The Greatest Story Ever Sold--Revised Edition

I Know What I Saw: Modern-Day Encounters with Monsters of New Urban Legend and Ancient Lore

Lost Technologies of Ancient Egypt: Advanced Engineering in the Temples of the Pharaohs

The Power of Then: Revealing Egypt's Lost Wisdom- Revised and Updated

Anna, Grandmother of Jesus: A Message of Wisdom and Love

The Real Toltec Prophecies: How the Aztec Calendar Predicted Modern-Day Events and Reveals a Pathway to a New Era of Humankind

Modern Esoteric: Beyond Our Senses

Supernatural: Meetings with the Ancient Teachers of Mankind

The Franklin Scandal: A Story of Powerbrokers, Child Abuse and Betrayal

Confessions of an Egyptologist: Lost Libraries, Vanished Labyrinths & the Astonishing Truth Under the Saqqara Pyramids

Family of Secrets: The Bush Dynasty, America's Invisible Government, and the Hidden History of the Last Fifty Years

The Kingdom of Agarttha: A Journey Into the Hollow Earth

Fallen Angel Oracle Cards: Discover the Art and Wisdom of Prediction with This Insightful Book and 72 Cards

Cosmic Trigger I: Final Secret of the Illuminati

Giants on Record: America's Hidden History, Secrets in the Mounds and the Smithsonian Files

The Anunnaki Connection: Sumerian Gods, Alien Dna, and the Fate of Humanity (from Eden to Armageddon)

War of the Gods: Alien Skulls, Underground Cities, and Fire from the Sky

The Pleiadian Agenda: A New Cosmology for the Age of Light

Tales from the Time Loop: The Most Comprehensive Expose of the Global Conspiracy Ever Written and All You Need to Know to Be Truly Free

The Beginner's Guide to Alchemy: Practical Lessons and Exercises to Enhance Your Life

The God Code: The Secret of Our Past, the Promise of Our Future

Angel Heart Sigils: Mystical Symbols from the Angels of Atlantis

The Ancient Language of Sacred Sound: The Acoustic Science of the Divine

When Time Began: Book V of the Earth Chronicles

Gobekli Tepe: Genesis of the Gods: The Temple of the Watchers and the Discovery of Eden

The Runes Box: Tools to Connect You to the Magic of the Universe - Contains: A Guide to Reading Runes and 36 Cards for Divination and

Extraordinary Popular Delusions and the Madness of Crowds

Merchants of Light: The Consciousness That Is Changing the World

The Suppressed History of America: The Murder of Meriwether Lewis and the Mysterious Discoveries of the Lewis and Clark Expedition

The Book Your Church Doesn't Want You to Read

Sacred Geometry: Language of the Angels

World History and the Mysteries: In the Light of Anthroposophy (Cw 233)

Vimana: Flying Machines of the Ancients

The Moses Code: The Most Powerful Manifestation Tool in the History of the World, Revised and Updated

The Uninvited: An exposé of the alien abduction phenomenon

The Trillion-Dollar Conspiracy: How the New World Order, Man-Made Diseases, and Zombie Banks Are Destroying America

Mystery of the White Lions: Children of the Sun God

The Masters and Their Retreats

First Templar Nation: How Eleven Knights Created a New Country and a Refuge for the Grail

Bigfoot!: The True Story of Apes in America

Confessions of an Illuminati, Volume I, 1: The Whole Truth about the Illuminati and the New World Order

JFK: The Cia, Vietnam, and the Plot to Assassinate John F. Kennedy

Slave Species of the Gods: The Secret History of the Anunnaki and Their Mission on Earth

The Invisible Master: Secret Chiefs, Unknown Superiors, and the Puppet Masters Who Pull the Strings of Occult Power from the Alien World