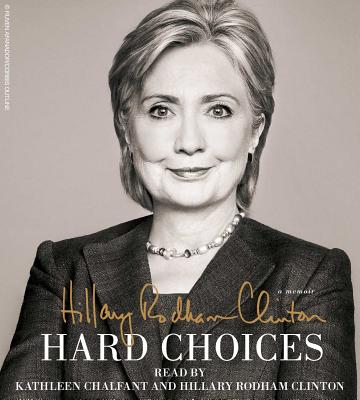 2016 Democratic Nominee for President of the United States Hillary Rodham Clinton's inside look at the choices and challenges she has faced is a subtle, finely calibrated work...with succinct and often shrewd appraisals of the complex web of political, economic, and historical forces in play around the world (The New York Times). In the aftermath of her 2008 presidential run, Hillary Rodham Clinton expected to return to the United States Senate. To her surprise, newly elected President Barack Obama asked her to serve in his administration as Secretary of State. Hard Choices is a richly detailed and compelling chronicle of Clinton's role in the foreign initiatives and crises that defined the first term of the Obama administration...it teems with small, entertaining details about her interactions with foreign leaders (Los Angeles Times). Secretary Clinton and President Obama had to decide how to repair fractured alliances, wind down two wars, and address a global financial crisis. Along the way, they grappled with tough dilemmas, especially the decision to send Americans into harm's way, from Afghanistan to Libya to the hunt for Osama bin Laden. By the end of her tenure, Secretary Clinton had gained a truly global perspective on the major trends reshaping today's landscape. In Hard Choices, a rich and lively narrative (Entertainment Weekly), Hillary Clinton offers her views on what it will take for the United States to compete and thrive. This memoir is serious, sober, and substantive (The New York Times Book Review).

Rush on the Radio: A Tribute from His Sidekick for 30 Years

Every Day Is a Gift: A Memoir

The Man I Knew: The Amazing Story of George H. W. Bush's Post-Presidency

Churchill's Shadow: The Life and Afterlife of Winston Churchill

Too Much and Never Enough: How My Family Created the World's Most Dangerous Man

The Profession: A Memoir of Community, Race, and the Arc of Policing in America

This Country: My Life in Politics and History

Stronger: Courage, Hope, and Humor in My Life with John McCain

The Girl with Seven Names: Escape from North Korea

Walking with the Wind: A Memoir of the Movement

The Note Through the Wire: The Incredible True Story of a Prisoner of War and a Resistance Heroine

I Have Something to Tell You: A Memoir

Faithful Presence: The Promise and the Peril of Faith in the Public Square

Nothing Is Impossible: America's Reconciliation with Vietnam

Truth Worth Telling: A Reporter's Search for Meaning in the Stories of Our Times

Assignment Russia: Becoming a Foreign Correspondent in the Crucible of the Cold War

Friends from the Beginning: The Berkeley Village That Raised Kamala and Me

Thirteen Ballots: The Manufactured Scandal That Overturned an Election

From the Cotton Field to Capitol Hill

Against All Hope: A Memoir of Life in Castro's Gulag

Tough Love: My Story of the Things Worth Fighting for

Judah Benjamin: Counselor to the Confederacy

Song in a Weary Throat: Memoir of an American Pilgrimage

The Path to Power: The Years of Lyndon Johnson I

Still Burning: Half a Century of Chicago, from the Streets to the Corridors of Power: A Memoir

I Have Something to Tell You: A Memoir

Death of the Senate: My Front Row Seat to the Demise of the World's Greatest Deliberative Body

John Lewis: The Last Interview: And Other Conversations

Endgame: Inside the Impeachment of Donald J. Trump

Speaking for Myself: Faith, Freedom, and the Fight of Our Lives Inside the Trump White House

The My Guy Club: The Chicago Machine, Mob. Teamsters and the Guv!

Proof of Life: Twenty Days on the Hunt for a Missing Person in the Middle East

Don't Burn This Book: Thinking for Yourself in an Age of Unreason

Before the Storm: Barry Goldwater and the Unmaking of the American Consensus

Ten More Doors: Politics and the Path to Change

Zealot: The Life and Times of Jesus of Nazareth

The Black President: Hope and Fury in the Age of Obama

It Worked for Me LP

A Drop of Treason: Philip Agee and His Exposure of the CIA

Means of Ascent: The Years of Lyndon Johnson II

Promise Me, Dad: A Year of Hope, Hardship, and Purpose

The Making of Oliver Cromwell

Deep State Target: How I Got Caught in the Crosshairs of the Plot to Bring Down President Trump

The Woman Behind the New Deal: The Life and Legacy of Frances Perkins--Social Security, Unemployment Insurance, and the Minimum Wage

A. Lincoln: A Biography

The Last Lion: Winston Spencer Churchill: Defender of the Realm, 1940-1965

Vice President Kamala Harris: Her Path to the White House

Machiavelli: The Art of Teaching People What to Fear

The Room Where It Happened: A White House Memoir

Grounded: A Senator's Lessons on Winning Back Rural America

Accidental First Lady: On the front lines (and behind the scenes) of local politics

The Prisoner: A Memoir

Shirley Chisholm: The Last Interview: And Other Conversations

We're Better Than This: My Fight for the Future of Our Democracy

We're Better Than This: My Fight for the Future of Our Democracy

Still Burning: Half a Century of Chicago, from the Streets to the Corridors of Power: A Memoir

The Skin We're in: A Year of Black Resistance and Power

Our Man: Richard Holbrooke and the End of the American Century

Mrs. Kennedy and Me

Madam C.J. Walker: The Making of an American Icon

Ready for Revolution: The Life and Struggles of Stokely Carmichael (Kwame Ture)

A House in the Sky

Backrooms and Bayous: My Life in Louisiana Politics

The Kennedys in the World: How Jack, Bobby, and Ted Remade America's Empire

Promise Me, Dad: A Year of Hope, Hardship, and Purpose

Living for Change: An Autobiography

Fortunate One: From Nantucket to the White House: A Memoir

At War with Corruption: A Biography of Bill Price, U.S. Attorney for the Western District of Oklahoma