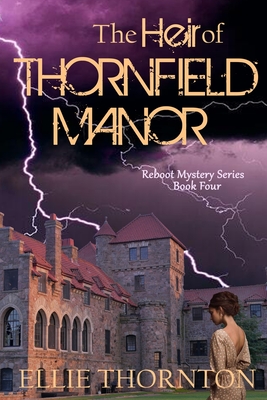 The Heir of Thornfield Manor

He's a grieving widower of three years . . .She's undercover working his wife's murder case.But there's more going on in Thornfield Manor than either of them realize.

Even though Detective Elizabeth Shea worked with the feds on a case a year before, the last thing she expects is to be requested on a murder case in a rural California town called Thornfield. Almost three years after Katelyn Daley was murdered in her home, without any leads, the case went cold - until a week ago when a doctor was killed in the same execution style as her.

Now with new leads, the Feds need Elizabeth to go undercover in Thornfield Manor and watch over its heir, Patrick Daley - the widower and ex-psychic who sometimes consults with the Feds, and with whom she feels an inexplicable bond. Elizabeth's job seems pretty straightforward - make sure Daley stays out of trouble until the case is solved. But, the more she learns, the more complicated it becomes. The police work on Katelyn's murder was shoddy at best with lost evidence, missing witnesses and suspects, and a timeline that doesn't quite add up. And that doesn't even include the creepy laughter drifting through the manor's halls at night or the attempt on Patrick's life. If this case keeps going as is, Elizabeth is at risk of losing much more than she ever expected - her heart, her job, and possibly the life of the man she never meant to love.

Despite having their minds rebooted for the fourth time, Elizabeth Shea and Patrick Daley are drawn to each other like never before as they face crooked cops, assassins, and a mysterious woman in their midst in this contemporary retelling of Jane Eyre. (Can be read as a standalone.)

A small-town Christian romantic suspense you won't want to put down!

What readers are saying:

★★★★★ All of Ellie's contemporary reboot books are wonderful and this latest did not disappoint! Clean, suspenseful and fun, I recommend it! - Katie Miner

★★★★★ I love this series, and this story made me love it even more! The reboot of Jane Eyre required some clever reimagining to fit into the modern era, and the author definitely delivered. The clues to the overarching plot at the beginning were as intriguing as ever, and the murder mystery was captivating. I can't wait for more! - Diane M

★★★★★ I think this is my favorite so far, but it's close . . . the tension and chemistry between Patrick and Elizabeth is perfection. Also a suspenseful mystery with a great cast of suspects. Can't wait for the next one! - K. Lubbers

★★★★★ Great thriller. The story has you entertained throughout, and towards the end, it's hard to put it down. A real nail biter! - Dave Holcomb

Scroll up to buy this book!

An Amish Proposal for Christmas: An Uplifting Inspirational Romance

Meet Me in the Margins

Home Where She Belongs

I'll Be Seeing You

A Nanny for the Rancher's Twins: An Uplifting Inspirational Romance

All in Good Time: An Amish Romance

The View from Coral Cove

Beneath the Bending Skies

A Reason to Stay: An Uplifting Inspirational Romance

Once Upon a Farmhouse: An Uplifting Inspirational Romance

Not as it Seems

One Great Love: An Advent and Christmas Treasury of Readings, Poems, and Prayers

In Love with the Amish Nanny: An Uplifting Inspirational Romance

The Chosen: Come and See: A Novel Based on Season 2 of the Critically Acclaimed TV Series

Death Comes for the Archbishop

Beacon of Light: An Amish Romance

The Story of Love

The Letter from Briarton Park

Inventions of the Heart

The Island of the World

You'll Be Mine: A Hearts Bend Novel

The Secret Between Them: An Uplifting Inspirational Romance

A Quilt for Christmas: A Christmas Novella

Embracing His Past: An Uplifting Inspirational Romance

When the Meadow Blooms

A Life of No Coincidence

With Me in the Storm

Morning Star of the Reformation

The Amish Twins Next Door: An Uplifting Inspirational Romance

To Tame a Cowboy

The Prophet's Wife: A Novel of an American Faith

The Warmth of Sunshine

Falling for the Cowgirl

Tangled Violets: A Novel of Redemption

A Model of Devotion

A Place to Heal: An Uplifting Inspirational Romance

The Extraordinary Deaths of Mrs. Kip

The Element of Love

Written on the Wind

The Souls of Lost Lake

The Forgotten Life of Eva Gordon

By Way of the Moonlight

A Lineage of Grace: Five Stories of Unlikely Women Who Changed Eternity

Where the Road Bends

The Girl Who Could Breathe Under Water