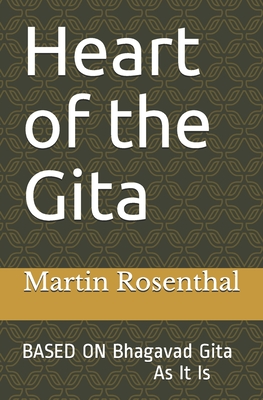 Heart of the Gita: based on Bhagavada Gita As It Is

Heart of Gita DiscriptionChapters 7 through 12 of the Bhagavad Gita As It Is are often referred to as the heart of the gita, I composed Heart of the Gita, consisting for now of only Chapters 7-9, while I was working as a substitute teacher, during most of the class time. The work consists of what I call parallel approximations of the original Sanskrit verses. For example, the English line of verse above each Sanskrit line of verse approximates, word for word, the meaning of the line below it: to Me attached the mind Parthamayy āsakta-manāḥ pārthayoga engaged in Me shelteredyogaḿ yuñjan mad-āśrayahwithout a doubt completely Mẹasaḿśayaḿ samagraḿ māḿby which you'll know, that understandyathā jñāsyasi tac chṛṇuIn the above parallel quatrains, to Me is written above the Sanskrit may(a), and the English attached is written above the Sanskrit āsakta, according to their respective meanings. The English lines, like the Sanskrit below them, consist of eight beats each. This makes for nice recitation of the English parallel Sanskrit verses and at the same time illumines the text, teaching Sanskrit to English meanings or approximations of meanings.This is followed by an English verse translation using the same structure of four lines of eight beets each as the original Sanskrit.With mind attached to Me Partha, Protected by Me in yoga, Now try to hear and understand;I'll tell you fully Who I am.Above all of the above, I have placed Shrila Prabhupada's English prose translations: Now hear, O son of Pṛthā, how by practicing yoga in full consciousness of Me, with mind attached to Me, you can know Me in full, free from doubt.And at the bottom of the page I have placed Shrila Prabhupada's word for word synonyms.śrī-bhagavān uvāca - the Supreme Lord said; mayi - to Me; āsakta-manāḥ - mind attached; pārtha - O son of Pṛthā; yogam - self-realization; yuñjan - practicing; mat-āśrayaḥ - in consciousness of Me (Kṛṣṇa consciousness); asaṁśayam - without doubt; samagram - completely; mām - Me; yathā - how; jñāsyasi - you can know; tat - that; śṛṇu - try to hear.All of this helped me remain Krishna conscious during my job, and it also provides, I hope to believe, a good and enjoyable source for all devotees to enrich their understanding of the original Sanskrit verses.

Jesus, I Trust in You: A 30-Day Personal Retreat with the Litany of Trust

My Utmost for His Highest Devotional Journal: Updated Language

If God Is Love, Don't Be a Jerk

Canceling Christianity: How The Left Silences Churches, Dismantles The Constitution, And Divides Our Culture

My Utmost for His Highest: Updated Language Gift Edition

The Catholic Guide to Miracles: Separating the Authentic from the Counterfeit

The Case for Faith: A Journalist Investigates the Toughest Objections to Christianity

Choice Privilege: Whats Race Got To Do With It?

What Is Life?: With Mind and Matter and Autobiographical Sketches

Stability: How an Ancient Monastic Practice Can Restore Our Relationships, Churches, and Communities

Socialists Don't Sleep: Christians Must Rise or America Will Fall

Love Is the Way: Holding on to Hope in Troubling Times

Finding Chika: A Little Girl, an Earthquake, and the Making of a Family

Keys to the Deeper Life

You Who? Why You Matter and How to Deal with It

Shadowland: From Jeffrey Epstein to the Clintons, from Obama and Biden to the Occult Elite: Exposing the Deep-State Actors at War

Stronger Than the Dark: Exploring the Intimate Relationship Between Running and Depression

The Trump Prophecies: The Astonishing True Story of the Man Who Saw Tomorrow...and What He Says Is Coming Next

God and Cancel Culture: Stand Strong Before It's Too Late

Better to Have Gone: Love, Death, and the Quest for Utopia in Auroville

Art and Faith: A Theology of Making

God's Promises for Your Every Need, NKJV

Healing a Shattered Soul: My Faithful Journey of Courageous Kindness after the Trauma and Grief of Domestic Terrorism

What on Earth Am I Here For? Purpose Driven Life

Heal Together Without Hurting Each Other

Unbound: A Practical Guide to Deliverance from Evil Spirits

Return of the God Hypothesis: Three Scientific Discoveries That Reveal the Mind Behind the Universe

Humility: The Journey Toward Holiness

As a Man Thinketh

The New Answers Book 1: Over 25 Questions on Creation/Evolution and the Bible

Authority in Prayer: Praying with Power and Purpose

Choice Privilege: What's Race Got To Do With It?

Julian of Norwich: Wisdom in a Time of Pandemic-And Beyond

The Devil in Connecticut

The Lesser Key of Solomon

Let Us Dream: The Path to a Better Future

My Utmost for His Highest: Updated Language Easy Print Edition

The Rise and Triumph of the Modern Self: Cultural Amnesia, Expressive Individualism, and the Road to Sexual Revolution

The End of Reason: A Response to the New Atheists

All the Time: Daily Devotions Finding Faith in the Everyday Moments

The Peacemaker: A Biblical Guide to Resolving Personal Conflict

The Black Woman's Little Book of Spells: Magical Keys to Transforming Your Life

Feed Your Moon: Predictive and Mindful Astrology One Phase at a Time

A Year of Positive Thinking: Daily Inspiration, Wisdom, and Courage

Is there Hope?: The Fascination of the Discovery