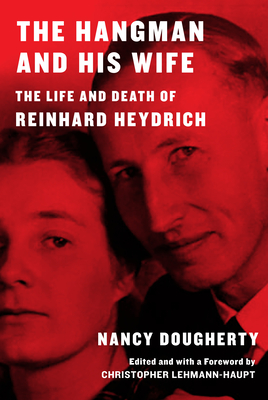 An astonishing journey into the heart of Nazi evil: a portrait of one of the darkest figures of Hitler's Nazi elite--Reinhard Heydrich, the designer and executor of the Holocaust, chief of the Reich Main Security, including the Gestapo--interwoven with commentary by his wife, Lina, from the author's in-depth interviews. He was called the Hangman of the Gestapo, the butcher of Prague, with a reputation as a ruthlessly efficient killer. He was the head of the SS, and the Gestapo, second in command to Heinrich Himmler. His orders set in motion the Kristallnacht pogrom of 1938 and, as the lead planner of Hitler's Final Solution, he chaired the Wannsee Conference, at which details of the murder of millions of Jews across Nazi-occupied Europe were toasted with cognac. In The Hangman and His Wife, Nancy Dougherty, and, following her death, Christopher Lehmann-Haupt, masterfully explore who Heydrich was and how he came to be, and how he came to do what he did. We see Heydrich from his rarefied musical family origins and his ugly-duckling childhood and adolescence, to his sudden flameout as a promising Naval officer (he was forced to resign his Naval commission after dishonoring the office corps by having sex with the unmarried daughter of a shipyard director and refusing to marry her). Dougherty writes of his seemingly hopeless job prospects as an untrained civilian during Germany's hyperinflation and unemployment, and his joining the Nazi party through the attraction to Nazism of his fiancée, Lina von Osten, and her father, along with the rumor shadowing him of a strain of Jewishness inherited from his father's side. And we follow Heydrich's meteoric rise through the Nazi high command--from SS major, to colonel to brigadier general, before he was thirty, deputy to Heinrich Himmler, expanding the SS, the Gestapo, and developing the Reich's plans for the Jewish solution. And throughout, we hear the voice of Lina Heydrich, who was by his side until his death at the age of thirty-eight, living inside the Nazi inner circles as she waltzed with Rudolf Hess, feuded with Hermann Göring, and drank vintage wine with Albert Speer.

Hubert Humphrey: The Conscience of the Country

Cicero: The Life and Times of Rome's Greatest Politician

Lincoln's Lieutenants: The High Command of the Army of the Potomac

The First Tycoon: The Epic Life of Cornelius Vanderbilt

Henry VIII: And the Men Who Made Him

The World Remade: America in World War I

Memories: From Moscow to the Black Sea

Custer's Trials: A Life on the Frontier of a New America

The Last Pagan: Julian the Apostate and the Death of the Ancient World

Treason by the Book

Master of the Senate: The Years of Lyndon Johnson III

Bound for the Promised Land: Harriet Tubman: Portrait of an American Hero

Book of Ages: The Life and Opinions of Jane Franklin

Hadrian and the Triumph of Rome

The Lost Tudor Princess: The Life of Lady Margaret Douglas

Means of Ascent: The Years of Lyndon Johnson II

Robert Oppenheimer: A Life Inside the Center

The Cowshed: Memories of the Chinese Cultural Revolution

The Last Tsar: The Life and Death of Nicholas II

The Romanovs: The Final Chapter

Stalin's Daughter: The Extraordinary and Tumultuous Life of Svetlana Alliluyeva

The First Crusade: The Chronicle of Fulcher of Chartres and Other Source Materials

Through A Glass Darkly

The Book of Margery Kempe

Eichmann Before Jerusalem: The Unexamined Life of a Mass Murderer

Marco Polo: From Venice to Xanadu

The House of Wittgenstein: A Family at War

The House at Sugar Beach: In Search of a Lost African Childhood

Records of Shelley, Byron, and the Author

Young Che: Memories of Che Guevara by His Father

The Days of Rondo

This America of Ours: Bernard and Avis Devoto and the Forgotten Fight to Save the Wild

Hitler's Girl: The British Aristocracy and the Third Reich on the Eve of WWII

Becoming FDR: The Personal Crisis That Made a President

The Scandalous Hamiltons: A Gilded Age Grifter, a Founding Fathers Disgraced Descendant, and a Trial at the Dawn of Tabloid Journalism

Children of Hope: the Story of Le Minh Dao