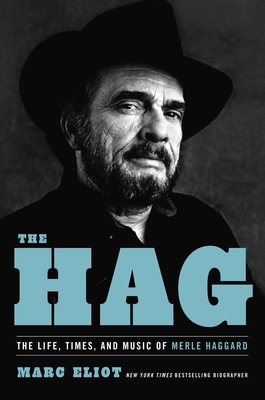 The definitive biography of country legend Merle Haggard by a NYT bestselling biographer of Clint Eastwood, Cary Grant, The Eagles, and more. Merle Haggard was one of the most important country music musicians who ever lived. His astonishing musical career stretched across the second half of the 20th Century and into the first two decades of the next, during which he released an extraordinary 63 albums, 38 that made it on to Billboard's Country Top Ten, 13 that went to #1, and 37 #1 hit singles. With his ample songbook, unique singing voice and brilliant phrasing that illuminated his uncompromising commitment to individual freedom, cut with the monkey of personal despair on his back and a chip the size of Monument Valley on his shoulder, Merle's music and his extraordinary charisma helped change the look, the sound, and the fury of American music. The Hag tells, without compromise, the extraordinary life of Merle Haggard, augmented by deep secondary research, sharp detail and ample anecdotal material that biographer Marc Eliot is known for, and enriched and deepened by over 100 new and far-ranging interviews. It explores the uniquely American life of an angry rebellious boy from the wrong side of the tracks bound for a life of crime and a permanent home in a penitentiary, who found redemption through the music of the common man. Merle Haggard's story is a great American saga of a man who lifted himself out of poverty, oppression, loss and wanderlust, to catapult himself into the pantheon of American artists admired around the world. Eliot has interviewed more than 100 people who knew Haggard, worked with him, were influenced by him, loved him or hated him. The book celebrates the accomplishments and explore the singer's infamous dark side: the self-created turmoil that expressed itself through drugs, women, booze, and betrayal. The Hag offers a richly anecdotal narrative that will elevate the life and work of Merle Haggard to where both properly belong, in the pantheon of American music and letters. The Hag is the definitive account of this unique American original, and will speak to readers of country music and rock biographies alike.

The Spirituals and the Blues

Taylor Swift: In Her Own Words

On the Bus with Bill Monroe: My Five-Year Ride with the Father of Blue Grass

On the Porch: Life and Music in Terlingua, Texas

Made in Louisiana: The Story of the Acadian Accordion

Will the Circle Be Unbroken: The Making of a Landmark Album, 50th Anniversary

The Book of Sea Shanties: Wellerman and Other Songs from the Seven Seas

Woman Walk the Line: How the Women in Country Music Changed Our Lives

The Music of the Statler Brothers: An Anthology

Outlaw: Waylon, Willie, Kris, and the Renegades of Nashville

My House of Memories: An Autobiography

Joni Mitchell: In Her Own Words

Wayfaring Strangers: The Musical Voyage from Scotland and Ulster to Appalachia

A Deeper Blue, 1: The Life and Music of Townes Van Zandt

Dolly on Dolly: Interviews and Encounters with Dolly Parton

The Faith of Dolly Parton: Lessons from Her Life to Lift Your Heart

Jason Molina: Riding with the Ghost

Then Garth Became Elvis: A Country Music Writer's Journey with the Stars, 1985-2010

One Bourbon, One Scotch, One Beer: Three Tales of John Lee Hooker

The Martin Ukulele: The Little Instrument That Helped Create a Guitar Giant

The Book of Playground Songs and Rhymes

Trains, Jesus, and Murder: The Gospel According to Johnny Cash

The Book of Song Dances

I.W.W. Songs to Fan the Flames of Discontent: A Facsimile Reprint of the Nineteenth Edition (1923) of the Little Red Song Book

Johnny Cash: The Redemption of an American Icon

Wichita Lineman: Searching in the Sun for the World's Greatest Unfinished Song

Musics Lost and Found: Song Collectors and the Life and Death of Folk Tradition

Rural Rhythm: The Story of Old-Time Country Music in 78 Records

Unbroken Circle: A Quotable History of the Grand OLE Opry

Where Rivers and Mountains Sing: Sound, Music, and Nomadism in Tuva and Beyond

I Never Met a Story I Didn't Like: Mostly True Tall Tales

The Mayor of Macdougal Street: A Memoir

We Never Knew Just What It Was ... The Story of the Chad Mitchell Trio

America, the Band: An Authorized Biography

Comin' Right at Ya: How a Jewish Yankee Hippie Went Country, Or, the Often Outrageous History of Asleep at the Wheel

Every Night Is Saturday Night: A Country Girl's Journey to the Rock & Roll Hall of Fame

Bob Dylan: How the Songs Work

The Encyclopedia of Country Music

The Bristol Sessions: Writings about the Big Bang of Country Music

The Birth of the Bakersfield Sound: A Honky Tonk Attitude

I'll Be Here in the Morning: The Songwriting Legacy of Townes Van Zandt

Just Jessie: My Guide to Love, Life, Family, and Food

Sea Shanties: The Lyrics and History of Sailor Songs

He Stopped Loving Her Today: George Jones, Billy Sherrill, and the Pretty-Much Totally True Story of the Making of the Greatest Country Record of A

A Simple Twist of Fate: Bob Dylan and the Making of Blood on the Tracks

Everything I Need to Know I Learned from Country Music: Life Lessons on Love, Heartbreak, and More from America's Favorite Songs

¡Canta Conmigo!: Songs and Singing Games from Guatemala and Nicaragua

Nashville: Behind the Curtain

South to Louisiana: The Music of the Cajun Bayous 2nd Edition

And a Voice to Sing with: A Memoir

Music in My Life: Notes From a Longtime Fan

Squeeze This!: A Cultural History of the Accordion in America

The First 100 Picking Patterns for Guitar: The Beginner's Guide to Perfect Fingerpicking on Guitar

The Bakersfield Sound: How a Generation of Displaced Okies Revolutionized American Music

The Electric Muse Revisited: The Story of Folk Into Rock and Beyond

American Folk Songs for Children in Home, School, and Nursery School: A Book for Children, Parents, and Teachers

The Pilgrim: A Wall-To-Wall Odyssey

He Stopped Loving Her Today: George Jones, Billy Sherrill, and the Pretty-Much Totally True Story of the Making of the Greatest Country Record of a

Looking Back to See: A Country Music Memoir

Minstrel of the Appalachians: The Story of BASCOM Lamar Lunsford

Music Is Power: Popular Songs, Social Justice, and the Will to Change

Wilcopedia: A Comprehensive Guide to the Music of America's Best Band

The Ancient Music of Ireland Arranged for Piano

Gentle on My Mind: In Sickness and in Health with Glen Campbell

The Southern Journey of Alan Lomax: Words, Photographs, and Music

The Best Dulcimer Method Yet

Another Mickey: Ruminations of a Texas Guitar Slinger

Say It One Time for the Brokenhearted: Country Soul in the American South

I Got a Song: A History of the Newport Folk Festival

Kentucky Traveler: My Life in Music

In Tune: Charley Patton, Jimmie Rodgers, and the Roots of American Music

The Texas-Mexican Conjunto: History of a Working-class Music

Bringing It All Back Home: The Influence of Irish Music at Home and Overseas

The Winding Stream: An Oral History of the Carter and Cash Family

Performance: Delivering Your Own Awesome

Joni Mitchell: Lady of the Canyon

The Secret Music at Tordesillas