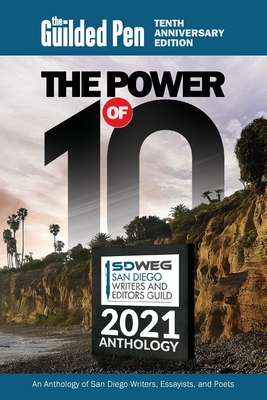 The San Diego Writers and Editors Guild published its first collection of short stories, essays, and poetry offered by its members in 2012. We called it The Guilded Pen―an apt title we thought―a cute play on words―and the title stuck. And so did the idea of publishing an annual anthology to encourage and promote the writing arts in San Diego. We could not have foreseen the impact that such an anthology would have on the San Diego writing scene.

The anthology has become a powerful platform to display the talent and skill of our diverse membership-a mix of cultures and life experiences, races, ages, and genders. They are high school and college students braving public scrutiny for the first time, as well as experienced writers exercising their craft and leaving a legacy of wisdom for those who follow. All stories, whether real or imagined, leave something of value for the reader.

It is said that writing is a lonely struggle. Telling the story, whether fiction, life memories, or poetic paths of travel, is an art. Like all art, masterpieces come easily for the few and, for others, they are worked over tirelessly until perfect.

Although the act of writing is a singular effort, a team is needed to share impressions and evaluations of the work. Getting that story ready to print is the work of our team of reviewers, editors, and coaches. Each writer receives impartial review, guidance and coaching, and unwavering encouragement to persevere in honing their craft. Acceptance is granted only after rigorous standards have been met. Good grammar, a plot that hooks the reader, and a cast of interesting characters moving the story forward to its conclusion is essential.

For over a decade, the annual publication of The Guilded Pen has brought recognition to the Guild and its members and has been a successful promotional tool for recruitment. In those ten years, more than 565 entries written by our members have been published. Copies of these anthologies repose on the shelves of public and private libraries and welcome newcomers to The Guilded Pen to peruse their pages.

The SDWEG has been providing its members with this wonderful opportunity for ten strong years. We look forward to future decades of printing great writing in The Guilded Pen, one of the many benefits of Guild membership.

Atlantis and Lemuria: History and Civilization

The Pushcart Prize XLVI: Best of the Small Presses 2022 Edition

The Translator of Desires: Poems

Moms Don't Have Time to Have Kids: A Timeless Anthology