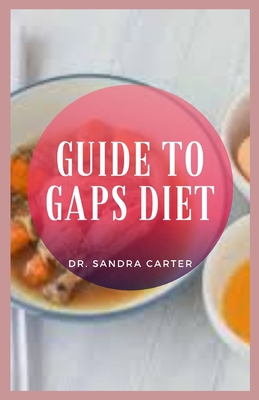 Guide to GAPS Diet: The GAPS diet, which originally was based on another diet used to treat celiac disease and inflammatory bowel disease,

The GAPS diet is not a weight-loss diet-instead, it's intended as a natural treatment for autism, attention deficit hyperactivity disorder, dyslexia, and other mental illnesses. In fact, GAPS stands for gut and psychology syndrome. Parents who are seeking alternative therapies for children who have been diagnosed with these conditions may turn to this diet.The diet itself claims to heal the gut by eliminating many foods considered problematic, including grains and dairy, and by adding foods with natural probiotics. Although many people attest that the diet has worked for them or for their child, there aren't any strong medical studies or other research showing effectiveness.The GAPS diet was developed by Natasha Campbell-McBride, M.D., who received her medical degree in Russia and who later received two post-graduate degrees, one in neurology and the other in nutrition. After she moved to the United Kingdom, her son was diagnosed with autism, which led her on a search for an effective autism treatment.Dr. Campbell-McBride published her first book, Gut And Psychology Syndrome. Natural Treatment Of Autism, ADHD, Dyslexia, Dyspraxia, Depression And Schizophrenia, in 2004. In it, she explored what she sees as the connections between brain health and gut health, and described a diet, the GAPS Nutritional Protocol, that she said has been highly successful in treating patients with learning disabilities and other mental problems.The GAPS diet, which originally was based on another diet used to treat celiac disease and inflammatory bowel disease, relies heavily on homemade broths and fermented vegetables.It's designed to heal what Dr. Campbell-McBride believes is damage to the gut wall, or leaky gut syndrome. Healing the gut, she says, also can help ease symptoms of mental conditions. Many children with autism also suffer from significant digestive problems, including diarrhea, constipation, and bloating.

Practical Paleo: A Customized Approach to Health and a Whole-Foods Lifestyle

Good Gut, Great Health: The Full Guide to Optimizing Your Energy and Vitality

Paleo Fitness: A Primal Training and Nutrition Program to Get Lean, Strong and Healthy

The China Study: The Most Comprehensive Study of Nutrition Ever Conducted and the Startling Implications for Diet, Weight Loss and Long

The Gospel of Food: Why We Should Stop Worrying and Enjoy What We Eat

The Sweet Potato Lover's Cookbook: More Than 100 Ways to Enjoy One of the World's Healthiest Foods

The Slimming Foodie in One: 100+ One-Dish Recipes Under 600 Calories

The Complete Ketogenic Diet for Beginners: Your Essential Guide to Living the Keto Lifestyle

The Whole Body Reset: Your Weight-Loss Plan for a Flat Belly, Optimum Health & a Body You'll Love at Midlife and Beyond

30-Minute Paleo: 60 Low-Prep, Big-Flavor Meals for Every Day of the Week

The Microbiome Connection: Your Guide to Ibs, Sibo, and Low-Fermentation Eating

The Iodine Crisis: What You Don't know About Iodine Can Wreck Your Life

Glucose Revolution: The Life-Changing Power of Balancing Your Blood Sugar

Clean -- Expanded Edition: The Revolutionary Program to Restore the Body's Natural Ability to Heal Itself

This Is Your Brain on Food: An Indispensable Guide to the Surprising Foods That Fight Depression, Anxiety, Ptsd, Ocd, Adhd, and More

The Blue Zones Challenge: A 4-Week Plan for a Longer, Better Life

Eat to Beat Disease: The New Science of How Your Body Can Heal Itself

The Big Book of Kombucha: Brewing, Flavoring, and Enjoying the Health Benefits of Fermented Tea

How to Eat More Plants: Transform Your Health with 30 Plant-Based Foods Per Week (and Why It's Easier Than You Think)

The 14-Day New Keto Cleanse: Lose Up to 15 Pounds in 2 Weeks with Delicious Meals and Low-Sugar Smoothies

Complete Guide to Fasting: (Heal Your Body Through Intermittent, Alternate-Day, and Extended Fasting)

The Obesity Code: . The Keys To Weight Loss Unlocked

Getting Well Naturally from The Soil to The Stomach: Understanding the Connection Between the Earth and Your Health

Beyond Keto: Burn Fat, Heal Your Gut, and Reverse Disease with a Mediterranean-Keto Lifestyle

What to Expect: Eating Well When You're Expecting, 2nd Edition

For Fork's Sake: A Quick Guide to Healing Yourself and the Planet Through a Plant-Based Diet

The Pk Cookbook: Go Paleo-Ketogenic and Get the Best of Both Worlds

The Obesity Code: Unlocking the Secrets of Weight Loss (Why Intermittent Fasting Is the Key to Controlling Your Weight)

Unlocking the Keto Code: The Revolutionary New Science of Keto That Offers More Benefits Without Deprivation

For Fork's Sake: A Quick Guide to Healing Yourself and the Planet Through a Plant-Based Diet

Mayo Clinic the Essential Diabetes Book: A Complete Guide to Prevent, Manage and Live with Diabetes

How Not to Die: Discover the Foods Scientifically Proven to Prevent and Reverse Disease

The How Not to Die Cookbook: 100+ Recipes to Help Prevent and Reverse Disease

The Eczema Diet: Discover How to Stop and Prevent the Itch of Eczema Through Diet and Nutrition

The Proof Is in the Plants: How Science Shows a Plant-Based Diet Could Save Your Life (and the Planet)

Women, Food, and Hormones: A 4-Week Plan to Achieve Hormonal Balance, Lose Weight, and Feel Like Yourself Again

The pH Miracle: Balance Your Diet, Reclaim Your Health

The Blue Zones: 9 Lessons for Living Longer from the People Who've Lived the Longest

The Carnivore Code: Unlocking the Secrets to Optimal Health by Returning to Our Ancestral Diet

Niacin: The Real Story: Learn about the Wonderful Healing Properties of Niacin

Lies My Doctor Told Me Second Edition: Medical Myths That Can Harm Your Health

Dr Sebi Treatments and Cures for All Diseases: The definitive step by step guide on how to effectively cure chronic diseases like herpes, Diabetes, Lu

Fit and Healthy Throughout Life

The Plant Paradox: The Hidden Dangers in Healthy Foods That Cause Disease and Weight Gain

Heal: Your Path to Thriving

The Omnivore's Dilemma: A Natural History of Four Meals

Metabolical: The Lure and the Lies of Processed Food, Nutrition, and Modern Medicine

Gut Renovation: Unlock the Age-Defying Power of the Microbiome to Remodel Your Health from the Inside Out

The Mediterranean Diet Cookbook for Beginners: Meal Plans, Expert Guidance, and 100 Recipes to Get You Started

Eat It!: The Most Sustainable Diet and Workout Ever Made: Burn Fat, Get Strong, and Enjoy Your Favorite Foods Guilt Free

How to Raise an Intuitive Eater: Raising the Next Generation with Food and Body Confidence

Alzheimer's Disease: What If There Was a Cure?: The Story of Ketones

How to Nourish Your Child Through an Eating Disorder: A Simple, Plate-By-Plate Approach to Rebuilding a Healthy Relationship with Food

The Mind-Gut Connection: How the Hidden Conversation Within Our Bodies Impacts Our Mood, Our Choices, and Our Overall Health

Medical Medium Life-Changing Foods: Save Yourself and the Ones You Love with the Hidden Healing Powers of Fruits & Vegetables

How to Let Go of Your Food and Weight Obsession: A Guide for the Woman who Wants More for Her Life

Eat Smarter: Use the Power of Food to Reboot Your Metabolism, Upgrade Your Brain, and Transform Your Life

The Pegan Diet: 21 Practical Principles for Reclaiming Your Health in a Nutritionally Confusing World

Exercised: Why Something We Never Evolved to Do Is Healthy and Rewarding

Juicing for Beginners: The Essential Guide to Juicing Recipes and Juicing for Weight Loss

The Oldest Cure in the World: Adventures in the Art and Science of Fasting

Younger You: Reduce Your Bio Age and Live Longer, Better

The Acid-Alkaline Food Guide - Second Edition: A Quick Reference to Foods and Their Effect on PH Levels

The Whole30: The 30-Day Guide to Total Health and Food Freedom

The Everything Gluten-Free & Dairy-Free Cookbook: 300 Simple and Satisfying Recipes Without Gluten or Dairy

Hormone Repair Manual: Every woman's guide to healthy hormones after 40

Living with Parkinson's Disease: A Complete Guide for Patients and Caregivers

Foodframe: Diet Is a Four-Letter Word

Next-Level Metabolism: The Art and Science of Metabolic Mastery

Fast Food Nation: The Dark Side of the All-American Meal

Paleo for Beginners: Essentials to Get Started

Food As Medicine Everyday: Reclaim Your Health With Whole Foods

Running on Veggies: Plant-Powered Recipes for Fueling and Feeling Your Best

Vitamin C: A 500-Year Scientific Biography from Scurvy to Pseudoscience

Unfuck Your Eating: Using Science to Build a Better Relationship with Food, Health, and Body Image

Celiac Disease Cookbook for the Newly Diagnosed: Guidance and Recipes for an Easy Transition to the Gluten-Free Diet

The Low-Fodmap Diet for Beginners: A 7-Day Plan to Beat Bloat and Soothe Your Gut with Recipes for Fast Ibs Relief

End the Mealtime Meltdown: Using the Table Talk Method to Free Your Family from Daily Struggles Over Food and Picky Eating

Science of Strength Training: Understand the Anatomy and Physiology to Transform Your Body

Simplify Your Health: A Doctor's Practical Guide to a Healthier Life

Eat to Beat Depression and Anxiety: Nourish Your Way to Better Mental Health in Six Weeks

The Essential Diet for Diverticulitis: A 3-Stage Nutrition Guide to Manage and Prevent Flare-Ups

The Sprout Book: Tap Into the Power of the Planet's Most Nutritious Food

Could It Be B12?: An Epidemic of Misdiagnoses

Two Meals a Day Cookbook: Over 100 Recipes to Lose Weight & Feel Great Without Hunger or Cravings

Take Control of Your Diabetes Risk

End Your Carb Confusion: A Simple Guide to Customize Your Carb Intake for Optimal Health