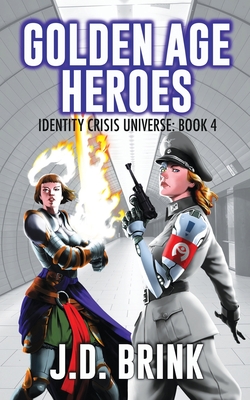 In 2015, Liska Sadoski is an android powerhouse and the newest member of Spitball's Phenomenal Five.

In 1941, Liska Sadoski is a war orphan and teenaged freedom fighter in Nazi-held Europe. She is also a talent born with supernatural gifts and a knight of the Allies' Camelot Division.

Camelot's new assignment: Parachute into enemy territory, track down their superpowered Axis counterparts and stop them, whatever the cost. But for a young woman out to avenge her father's murder, the price may be too high.

What happens when you mix Captain America, Indiana Jones, and H. P. Lovecraft? Find out when the entire IDCU series comes full-circle in the incredible season finale of the Identity Crisis Universe!

The Identity Crisis Universe (IDCU) takes the comic books you grew up on, gamma-irradiates them, and sets them loose upon the world. Superhero fiction that packs a punch!
Complete Season One:

An Atlas of Tolkien

The Past Is Red

We Have Always Been Here

The Girl with All the Gifts

The Steps of the Sun

Boy on the Bridge

The Secret History of Twin Peaks

To Hold Up the Sky

The End of Men

A House Between Earth and the Moon

I Sing the Body Electric: And Other Stories

Fall; Or, Dodge in Hell

Frankenstein: Or, the Modern Prometheus

The Day of the Triffids

The Testaments: The Sequel to the Handmaid's Tale

The Year of the Flood