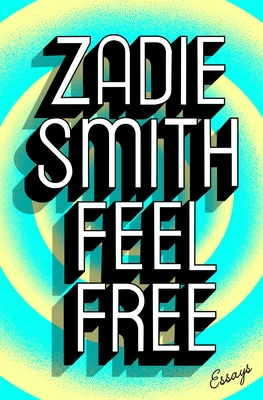 Winner of the 2018 National Book Critics Circle Award for Criticism A New York Times Notable Book From Zadie Smith, one of the most beloved authors of her generation, a new collection of essays Since she burst spectacularly into view with her debut novel almost two decades ago, Zadie Smith has established herself not just as one of the world's preeminent fiction writers, but also a brilliant and singular essayist. She contributes regularly to The New Yorker and the New York Review of Books on a range of subjects, and each piece of hers is a literary event in its own right. Arranged into five sections--In the World, In the Audience, In the Gallery, On the Bookshelf, and Feel Free--this new collection poses questions we immediately recognize. What is The Social Network--and Facebook itself--really about? It's a cruel portrait of us: 500 million sentient people entrapped in the recent careless thoughts of a Harvard sophomore. Why do we love libraries? Well-run libraries are filled with people because what a good library offers cannot be easily found elsewhere: an indoor public space in which you do not have to buy anything in order to stay. What will we tell our granddaughters about our collective failure to address global warming? So I might say to her, look: the thing you have to appreciate is that we'd just been through a century of relativism and deconstruction, in which we were informed that most of our fondest-held principles were either uncertain or simple wishful thinking, and in many areas of our lives we had already been asked to accept that nothing is essential and everything changes--and this had taken the fight out of us somewhat. Gathering in one place for the first time previously unpublished work, as well as already classic essays, such as, Joy, and, Find Your Beach, Feel Free offers a survey of important recent events in culture and politics, as well as Smith's own life. Equally at home in the world of good books and bad politics, Brooklyn-born rappers and the work of Swiss novelists, she is by turns wry, heartfelt, indignant, and incisive--and never any less than perfect company. This is literary journalism at its zenith. Zadie Smith's new book, Grand Union, is on sale 10/8/2019.

I Told You I Was Dehydrated

More Than True: The Wisdom of Fairy Tales

Call Them by Their True Names: American Crises (and Essays)

A Year in Words

Six Memos for the Next Millennium

Three Kinds of Motion: Kerouac, Pollock, and the Making of American Highways

The Book of Delights

Crying in the Bathroom: A Memoir

Walking in My Joy: In These Streets

Listening in the Dark: Women Reclaiming the Power of Intuition

Letters of Note: An Eclectic Collection of Correspondence Deserving of a Wider Audience

How to Read Now: Essays

Animal Joy: A Book of Laughter and Resuscitation

Portable Magic: A History of Books and Their Readers

Too Much of Life: The Complete Crônicas

My Life of Crime: Essays and Other Entertainments

The World as We Knew It: Dispatches from a Changing Climate

Tacky: Love Letters to the Worst Culture We Have to Offer

Wonderlands: Essays on the Life of Literature

May We Be Spared to Meet on Earth: Letters of the Lost Franklin Arctic Expedition

Consider the Lobster and Other Essays

She's Nice Though: Essays on Being Bad at Being Good

My First Popsicle: An Anthology of Food and Feelings

In Sensorium: Notes for My People

Abominations: Selected Essays from a Career of Courting Self-Destruction

A Line in the World: A Year on the North Sea Coast

Politics and the English Language: By George Orwell

Linea Nigra: An Essay on Pregnancy and Earthquakes

Chickens One Day, Feathers the Next

Still No Word from You: Notes in the Margin

The Moth Presents All These Wonders: True Stories about Facing the Unknown

In Defense of Sanity: The Best Essays of G.K. Chesterton

Eat Up!: Food, Appetite and Eating What You Want

Some of My Best Friends: Essays on Lip Service

The Heart of American Poetry

We Tell Ourselves Stories in Order to Live: Collected Nonfiction; Introduction by John Leonard

You Tell the Stories You Need to Believe: on the four seasons, time and love, death and growing up

The Moral Obligation to Be Intelligent: Selected Essays

Anatomy of 55 More Songs: The Oral History of Top Hits That Changed Rock, Pop and Soul