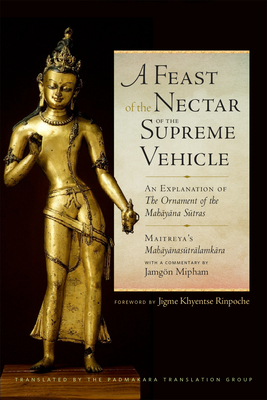 A Feast of the Nectar of the Supreme Vehicle: An Explanation of the Ornament of the Mahayana Sutras

A full translation of an important Mahāyāna Buddhist treatise with a commentary by the famous Tibetan luminary Jamgön Mipham. A monumental work and Indian Buddhist classic, the Ornament of the Mahāyāna Sūtras (Mahāyānasūtrālaṃkāra) is a precious resource for students wishing to study in-depth the philosophy and path of Mahāyāna Buddhism. This full translation and commentary outlines the importance of Mahāyāna, the centrality of bodhicitta or the mind of awakening, the path of becoming a bodhisattva, and how one can save beings from suffering through skillful means. This definitive composition of Mahāyāna teachings was imparted in the fourth century by Maitreya to the famous adept Asaṅga, one of the most prolific writers of Buddhist treatises in history. Asaṅga's work, which is among the famous Five Treatises of Maitreya, has been studied, commented upon, and taught by Buddhists throughout Asia ever since it was composed. In the early twentieth century, one of Tibet's greatest scholars and saints, Jamgön Mipham, wrote A Feast of the Nectar of the Supreme Vehicle, which is a detailed explanation of every verse. This commentary has since been used as the primary blueprint for Tibetan Buddhists to illuminate the depth and brilliance of Maitreya's pith teachings. The Padmakara Translation Group has provided yet another accessible and eloquent translation, ensuring that English-speaking students of Mahāyāna will be able to study this foundational Buddhist text for generations to come.

The Way of the Bodhisattva

The Root Stanzas of the Middle Way: The Mulamadhyamakakarika

The Precious Treasury of the Fundamental Nature

Mahasiddha Practice: From Mitrayogin and Other Masters, Volume 16 (the Treasury of Precious Instructions)

The Nectar of Manjushri's Speech: A Detailed Commentary on Shantideva's Way of the Bodhisattva

The Heart of Compassion: The Thirty-Seven Verses on the Practice of a Bodhisattva

A Chariot to Freedom: Guidance from the Great Masters on the Vajrayana Preliminary Practices

Finding Rest in the Nature of the Mind: The Trilogy of Rest, Volume 1

Finding Rest in Illusion: The Trilogy of Rest, Volume 3

Lion of Speech: The Life of Mipham Rinpoche

Finding Rest in Meditation: The Trilogy of Rest, Volume 2

The Root Stanzas of the Middle Way: The Mulamadhyamakakarika

Hard to Be a Saint in the City: The Spiritual Vision of the Beats

The Method of Zen

Stages of Meditation: The Buddhist Classic on Training the Mind

Buddhist Ritual Art of Tibet: A Handbook on Ceremonial Objects and Ritual Furnishings in the Tibetan Temple

The Heritage of the Bhikkhu: The Buddhist Tradition of Service

Being Present: Cultivate a Peaceful Mind Through Spiritual Practice

The Cult of Tara: Magic and Ritual in Tibetvolume 2

A Concise Introduction to Tibetan Buddhism

Our Human Potential: The Unassailable Path of Love, Compassion, and Meditation

Natural Wakefulness: Discovering the Wisdom We Were Born with

The Zen of You and Me: A Guide to Getting Along with Just about Anyone

Introduction to Buddhism: An Explanation of the Buddhist Way of Life

Wherever You Go, There You Are: Mindfulness Meditation in Everyday Life

Radical Acceptance: Embracing Your Life with the Heart of a Buddha

The Miracle of Mindfulness: An Introduction to the Practice of Meditation

The Opposite of Namaste

The Wisdom of Insecurity: A Message for an Age of Anxiety

No Mud, No Lotus: The Art of Transforming Suffering

The Heart of the Buddha's Teaching: Transforming Suffering Into Peace, Joy, and Liberation

You Are Here: Discovering the Magic of the Present Moment

How We Live Is How We Die

Buddha's Brain: The Practical Neuroscience of Happiness, Love, and Wisdom

The Life-Changing Magic of Tidying Up: The Japanese Art of Decluttering and Organizing

Mindfulness on the Go (Shambhala Pocket Classic): Simple Meditation Practices You Can Do Anywhere

Writing Down the Bones: Freeing the Writer Within

Why Buddhism Is True: The Science and Philosophy of Meditation and Enlightenment

True Love: A Practice for Awakening the Heart

Anger: Wisdom for Cooling the Flames

Japanese Death Poems: Written by Zen Monks and Haiku Poets on the Verge of Death

The Five Invitations: Discovering What Death Can Teach Us about Living Fully

The Art of Living: Peace and Freedom in the Here and Now

Love and Rage: The Path of Liberation Through Anger

The Art of Solitude

Radical Compassion: Learning to Love Yourself and Your World with the Practice of Rain

The Places That Scare You: A Guide to Fearlessness in Difficult Times

A Queer Dharma: Yoga and Meditations for Liberation

How to Be an Adult in Relationships: The Five Keys to Mindful Loving

The Opposite of Namaste: (Bookstore Edition)

The Opposite of Namaste

Comfortable with Uncertainty: 108 Teachings on Cultivating Fearlessness and Compassion

No Death, No Fear: Comforting Wisdom for Life

Buddhish: A Guide to the 20 Most Important Buddhist Ideas for the Curious and Skeptical

This Is It: And Other Essays on Zen and Spiritual Experience

Refuge Recovery: A Buddhist Path to Recovering from Addiction

How to Meditate: A Practical Guide to Making Friends with Your Mind

The Shamanic Bones of Zen: Revealing the Ancestral Spirit and Mystical Heart of a Sacred Tradition

The Other Side of Nothing: The Zen Ethics of Time, Space, and Being

Alive Until You're Dead: Notes on the Home Stretch

Your True Home: The Everyday Wisdom of Thich Nhat Hanh

We Were Made for These Times: Ten Lessons for Moving Through Change, Loss, and Disruption

Start Where You Are: A Guide to Compassionate Living

Mindfulness: A Practical Guide to Awakening

The Wise Heart: A Guide to the Universal Teachings of Buddhist Psychology

Zen Wisdom for the Anxious: Simple Advice from a Zen Buddhist Monk

The Art of Simple Living: 100 Daily Practices from a Zen Buddhist Monk for a Lifetime of Calm and Joy

Buddhism Plain and Simple: The Practice of Being Aware Right Now, Every Day

Spark Joy: An Illustrated Master Class on the Art of Organizing and Tidying Up

Living Beautifully: With Uncertainty and Change

The Things You Can See Only When You Slow Down: How to Be Calm in a Busy World

Silence: The Power of Quiet in a World Full of Noise

The Art of Power

True Love: A Practice for Awakening the Heart

No Self, No Problem: How Neuropsychology Is Catching Up to Buddhism

Taming the Tiger Within: Meditations on Transforming Difficult Emotions

Why Buddhism Is True: The Science and Philosophy of Meditation and Enlightenment

Where Spirit Touches Matter: a journey toward wholeness

A Year of Zen: A 52-Week Guided Journal

The Art of Living: Vipassana Meditation: As Taught by S. N. Goenka

The Tibetan Yogas of Dream and Sleep

Teachings of the Buddha

The Power of Mind: A Tibetan Monk's Guide to Finding Freedom in Every Challenge

The Blooming of a Lotus Revised & Expanded: Essential Guided Meditations for Mindfulness, Healing, and Transformation

Spirituality for Badasses: How to find inner peace and happiness without losing your cool

Zen and the Art of Happiness

Black and Buddhist: What Buddhism Can Teach Us about Race, Resilience, Transformation, and Freedom

Dhammapada: The Sayings of the Buddha

What the Buddha Taught: Revised and Expanded Edition with Texts from Suttas and Dhammapada

Happiness Becomes You: A Guide to Changing Your Life for Good

How to Hold a Cockroach: A book for those who are free and don't know it (full color version)

No Pressure, No Diamonds: Mining for Gifts in Illness and Loss

The Art of Happiness: A Handbook for Living

Why We Meditate: The Science and Practice of Clarity and Compassion

In the Buddha's Words: An Anthology of Discourses from the Pali Canon

The Science of Enlightenment: How Meditation Works

Writing Down the Bones Deck: 60 Cards to Free the Writer Within

The Wisdom of No Escape: And the Path of Loving-Kindness

Beyond Distraction: Five Practical Ways to Focus the Mind

Happy Teachers Change the World: A Guide for Cultivating Mindfulness in Education

You Belong: A Call for Connection

The Long Road Turns to Joy: A Guide to Walking Meditation

Guide to the Bodhisattva's Way of Life: How to Enjoy a Life of Great Meaning and Altruism

The Tibetan Book of the Dead: First Complete Translation

Love for Imperfect Things: How to Accept Yourself in a World Striving for Perfection

The Book of Joy: Lasting Happiness in a Changing World (Large Print Edition)

The Support Verses: Earliest Sayings of the Buddha

Lovingkindness: The Revolutionary Art of Happiness

The Other Shore: A New Translation of the Heart Sutra with Commentaries

The End of Your World: Uncensored Straight Talk on the Nature of Enlightenment

Tara: The Liberating Power of the Female Buddha

Karmamudra: The Yoga of Bliss

The Joy of Living: Unlocking the Secret and Science of Happiness

Love Letter to the Earth

The Energy of Prayer: How to Deepen Your Spiritual Practice

The Dharma of Poetry: How Poems Can Deepen Your Spiritual Practice and Open You to Joy