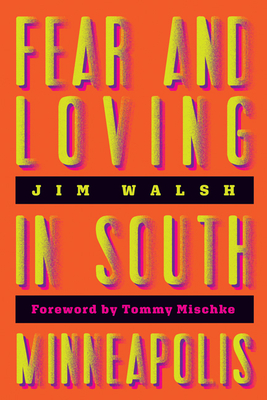 Two or three times a week, as a columnist, hustling freelance writer, and genuinely curious reporter, Jim Walsh would hang out in a coffee shop or a bar, or wander in a club or on a side street, and invariably a story would unfold--one more chapter in the story of Minneapolis, the city that was his home and his beat for more than thirty years. Fear and Loving in South Minneapolis tells that story, collecting the encounters and adventures and lives that make a city hum--and make South Minneapolis what it is. Here is a man who drives around Minneapolis in a van that sports a neon sign and keeps a running tally of the soldiers killed in Iraq. Here is another, haunted by the woman he fell in love with, and lost, many years ago at the Minnesota Music Café on St. Paul's East Side. Here are strangers on a cold night on the corner of Forty-sixth and Nicollet, finding comfort in each other's company in the wake of the shootings in Paris. And here are Walsh's own memories catching up with him: the woman who joined him in representing junior royalty for the Minneapolis Aquatennial when they were both seven years old; the lost friend, Soul Asylum's Karl Mueller, recalled while sitting on his memorial bench at Walsh's go-to refuge, the Rose Gardens near Lake Harriet. These everyday interactions, ordinary people, and quiet moments in Jim Walsh's writing create an extraordinary picture of a city's life. James Joyce famously bragged that if Dublin were ever destroyed, it could be rebuilt in its entirety from his written works. The Minneapolis that Jim Walsh maps is more a matter of heart, of urban life built on human connections, than of streets intersecting and literal landmarks: it is that lived city, documented in measures large and small, that his book brings so vividly to mind, drafting a blueprint of a community's soul and inviting a reader into the boundless, enduring experience of Fear and Loving in South Minneapolis.

State and Revolution in Finland

Making Capitalism: The Social and Cultural Construction of a South Korean Conglomerate

Breaking News: The Remaking of Journalism and Why It Matters Now

The Agrarian Seeds of Empire: The Political Economy of Agriculture in Us State Building

Reclaiming the Black Past: The Use and Misuse of African American History in the 21st Century

The World's Most Dangerous Place: Inside the Outlaw State of Somalia

Pride Parades: How a Parade Changed the World

Disposable Women and Other Myths of Global Capitalism

Place at the Table: The Gay Individual in American Society

Whose Story Is This?: Old Conflicts, New Chapters

The Age of American Unreason

Payback: Debt and the Shadow Side of Wealth

So You've Been Publicly Shamed

The Gospel of Food: Why We Should Stop Worrying and Enjoy What We Eat

Across the Pond: An Englishman's View of America

The University Avenue Project Volume 1: The Language of Urbanism: A Six-Mile Photographic Inquiry

The Song of the Cell: An Exploration of Medicine and the New Human

Ejaculate Responsibly: A Whole New Way to Think about Abortion

One Nation Under Blackmail: The Sordid Union Between Intelligence and Organized Crime That Gave Rise to Jeffrey Epstein Volume 2

One Nation Under Blackmail: The Sordid Union Between Intelligence and Crime That Gave Rise to Jeffrey Epstein, Vol.1

The Redstone Diary 2023: In Search of Beauty

On Critical Race Theory: Why It Matters & Why You Should Care

Viral Justice: How We Grow the World We Want

Platonic: How the Science of Attachment Can Help You Make--And Keep--Friends

The End of Scarcity: The Dawn of the New Abundant World

The Come Up: An Oral History of the Rise of Hip-Hop

My People: Five Decades of Writing about Black Lives

Nomad Century: How Climate Migration Will Reshape Our World

Conspirators' Hierarchy: The Story of the Committee of 300

Legend of Zelda: Breath of the Wild 2023 Wall Calendar

More After the Break: A Reporter Returns to Ten Unforgettable News Stories

Billionaire Wilderness: The Ultra-Wealthy and the Remaking of the American West

No Choice: The Destruction of Roe V. Wade and the Fight to Protect a Fundamental American Right

The Skeptics' Guide to the Future: What Yesterday's Science and Science Fiction Tell Us about the World of Tomorrow

The Power of Geography: Ten Maps That Reveal the Future of Our World

The Lego Story: How a Little Toy Sparked the World's Imagination

Newsroom Confidential: Lessons (and Worries) from an Ink-Stained Life

Screaming on the Inside: The Unsustainability of American Motherhood

Dollars for Life: The Anti-Abortion Movement and the Fall of the Republican Establishment

Nerd: Adventures in Fandom from This Universe to the Multiverse

Surveillance State: Inside China's Quest to Launch a New Era of Social Control

Five Days at Memorial: Life and Death in a Storm-Ravaged Hospital

Raising Them Right: The Untold Story of America's Ultraconservative Youth Movement and Its Plot for Power

City of Quartz: Excavating the Future in Los Angeles