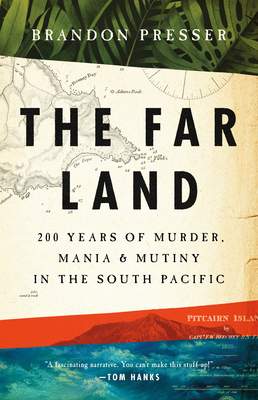 A celebrated travel writer tells the story of the tiny, fascinating island of Pitcairn, home of precisely 49 people, all descendants of the original founders of the island, the famous mutineers who were the basis for the novels and movie, The Mutiny On the Bounty. The public has been fascinated by Pitcairn since tales of it first started spreading in the early 1900s. But beyond the fictional Mutiny on the Bounty trilogy, there's never been a true deep dive, with full, unencumbered access. Until now. In The Far Land, travel writer Brandon Presser chronicles his time living on the island with its two resident families, marrying the island's haunting legend with his modern-day misadventures. He delves into its history: investigating the motives of the original mutineers who felt the need to burn their boats when they found this unmapped piece of rock in the middle of the Pacific, and why so many years later, people still stay there. He unpacks the natural resources and topology that first caused British explorers to decide to never return to their previous lives and families. And he goes deep into the problems inherent in such a matriarchal society where modern society's norms travel slowly. The Far Land is also about an outsider studying the most insular community on Earth while at the same time reckoning with his own (and all of our own) human nature as he finds so many of the problems this tiny society faces are not at all exclusive to them. The book is an operatic thriller rife with lust, jealousy, and greed, told with newly unearthed detail and unprecedented access to the island and its people.

O Say Can You Hear?: A Cultural Biography of the Star-Spangled Banner

Kilmichael: The Life and Afterlife of an Ambush

The Secret History of the World