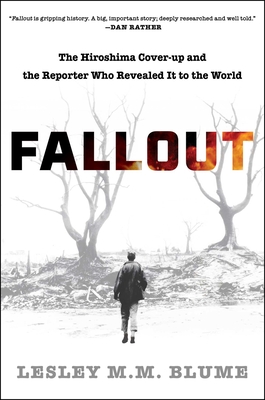 A NEW YORK TIMES NOTABLE BOOK OF 2020 New York Times bestselling author Lesley M.M. Blume reveals how one courageous American reporter uncovered one of the deadliest cover-ups of the 20th century--the true effects of the atom bomb--potentially saving millions of lives. Just days after the United States decimated Hiroshima and Nagasaki with nuclear bombs, the Japanese surrendered unconditionally. But even before the surrender, the US government and military had begun a secret propaganda and information suppression campaign to hide the devastating nature of these experimental weapons. The cover-up intensified as Occupation forces closed the atomic cities to Allied reporters, preventing leaks about the horrific long-term effects of radiation which would kill thousands during the months after the blast. For nearly a year the cover-up worked--until New Yorker journalist John Hersey got into Hiroshima and managed to report the truth to the world. As Hersey and his editors prepared his article for publication, they kept the story secret--even from most of their New Yorker colleagues. When the magazine published Hiroshima in August 1946, it became an instant global sensation, and inspired pervasive horror about the hellish new threat that America had unleashed. Since 1945, no nuclear weapons have ever been deployed in war partly because Hersey alerted the world to their true, devastating impact. This knowledge has remained among the greatest deterrents to using them since the end of World War II. Released on the 75th anniversary of the Hiroshima bombing, Fallout is an engrossing detective story, as well as an important piece of hidden history that shows how one heroic scoop saved--and can still save--the world.

The Making of the Atomic Bomb

Thirteen Days: A Memoir of the Cuban Missile Crisis

Raven Rock: The Story of the U.S. Government's Secret Plan to Save Itself-While the Rest of Us Die

The Wuhan Incident: Bioweapons and the Emerging Global Reset

The Apocalypse Factory: Plutonium and the Making of the Atomic Age

Voyage to the CROSSROADS

The Wuhan Incident: Bioweapons and the Emerging Global Reset

To Hell and Back: The Last Train from Hiroshima

From Berkeley to Berlin: How the Rad Lab Helped Avert Nuclear War

The Bomb: Presidents, Generals, and the Secret History of Nuclear War

Blown to Hell: America's Deadly Betrayal of the Marshall Islanders

Winning and Losing the Nuclear Peace: The Rise, Demise, and Revival of Arms Control

What Is Germ Warfare?

Dark Sun: The Making of the Hydrogen Bomb

Covid Coup: The Rise of the Fourth Reich

The Hegemon's Tool Kit: Us Leadership and the Politics of the Nuclear Nonproliferation Regime

Command and Control: Nuclear Weapons, the Damascus Accident, and the Illusion of Safety

Shadows on the Wall: Deterrence and Disarmament

The Dead Hand: The Untold Story of the Cold War Arms Race and Its Dangerous Legacy

Uranium: War, Energy, and the Rock That Shaped the World

Biohazard: The Chilling True Story of the Largest Covert Biological Weapons Program in the World--Told from the Inside by the Man

Atomic America: How a Deadly Explosion and a Feared Admiral Changed the Course of Nuclear History

Bomb Scare: The History and Future of Nuclear Weapons

The Manhattan Project: The Birth of the Atomic Bomb in the Words of Its Creators, Eyewitnesses, and Historians

Great American Gamble: Deterrence Theory and Practice from the Cold War to the Twenty-First Century

Legacies of the Manhattan Project: Reflections on 75 Years of a Nuclear World

Hiroshima Diary: The Journal of a Japanese Physician, August 6-September 30, 1945

Made in Hanford: The Bomb That Changed the World

The Apocalypse Factory: Plutonium and the Making of the Atomic Age

The Koreas: The Birth of Two Nations Divided

The Logic of American Nuclear Strategy: Why Strategic Superiority Matters

Inside Manzano: The Life of a Nuclear Special Weapons Storage Site

The Wizards of Armageddon

The Koreas: The Birth of Two Nations Divided

What Is Germ Warfare?

Prompt and Utter Destruction: Truman and the Use of Atomic Bombs Against Japan

Safe Enough?: A History of Nuclear Power and Accident Risk

No Use: Nuclear Weapons and U.S. National Security

The Atomic Bomb in Images and Documents: The Manhattan Project and the Bombing of Hiroshima and Nagasaki

The Button: The New Nuclear Arms Race and Presidential Power from Truman to Trump

Manhattan Project: The Untold Story of the Making of the Atomic Bomb

Something Extraordinary: A Short History of the Manhattan Project, Hanford, and the B Reactor

Rebels to Reels: A biography of Combat Cameraman Daniel A. McGovern USAF

Israel vs. Iran: The Shadow War

15 Minutes: General Curtis Lemay and the Countdown to Nuclear Annihilation

The Meaning of the Nuclear Revolution

The Case for U.S. Nuclear Weapons in the 21st Century

All Options on the Table: Leaders, Preventive War, and Nuclear Proliferation

Fallout: The True Story of the Cia's Secret War on Nuclear Trafficking

Rebels to Reels: A biography of Combat Cameraman Daniel A. McGovern USAF

Toxic: A History of Nerve Agents, from Nazi Germany to Putin's Russia

The Hanford Plaintiffs: Voices from the Fight for Atomic Justice

Understanding and Teaching the Cold War

The Manhattan Project at Hanford Site

The Fallacies of Cold War Deterrence and a New Direction

A Fiery Peace in a Cold War: Bernard Schriever and the Ultimate Weapon

When Angels Wept: A What-If History of the Cuban Missile Crisis

The Most Controversial Decision

Defcon-2: Standing on the Brink of Nuclear War During the Cuban Missile Crisis

The Myth of the Nuclear Revolution: Power Politics in the Atomic Age

Historic Photos of the Manhattan Project

Defcon-2: Standing on the Brink of Nuclear War During the Cuban Missile Crisis

Sleepwalking to Armageddon: The Threat of Nuclear Annihilation

Inspectors for Peace: A History of the International Atomic Energy Agency

The Sheathed Sword: From Nuclear Brink to No First Use

The Manhattan Project: Big Science and the Atom Bomb

Eating Grass: The Making of the Pakistani Bomb

Hiroshima Nagasaki: The Real Story of the Atomic Bombings and Their Aftermath

The Us Atlas of Nuclear Fallout 1951-1970 Vol. I Abridged General Reader Edition

For King and Country Book One: The Calling

By Fire and Ice: Dismentling Chemical Weapons While Preserving the Environment

A Higher Form of Killing: The Secret History of Chemical and Biological Warfare

My Journey at the Nuclear Brink

On Limited Nuclear War in the 21st Century

The Firecracker Boys: H-Bombs, Inupiat Eskimos, and the Roots of the Environmental Movement

A World Destroyed: Hiroshima and Its Legacies

The Bomb: A New History

Reflections: Memories of Sacrifices Shared and Comrades Lost in the Line of Duty

Uncommon Cause - Volume I: A Life at Odds with Convention - The Formative Years

War of Nerves: Chemical Warfare from World War I to Al-Qaeda

Biological Threats in the 21st Century: The Politics, People, Science and Historical Roots

The Age of Hiroshima

Titan II: A History of a Cold War Missile Program

Partners in Deterrence: Us Nuclear Weapons and Alliances in Europe and Asia

The Invention of Ecocide: Agent Orange, Vietnam, and the Scientists Who Changed the Way We Think about the Environment

50 Years at Yuma: A History of Military Testing and Civilian Bureaucracy

This is Redstone Missile Weapon System

The Bomb: A Life

Back From 44: The Sacrifice and Courage of a Few

The Man from Pakistan: The True Story of the World's Most Dangerous Nuclear Smuggler

The Form of Ideology and the Ideology of Form: Cold War, Decolonization and Third World Print Cultures

The Brink: President Reagan and the Nuclear War Scare of 1983

At the Abyss: An Insider's History of the Cold War

Ronald Reagan Was A Badass: Crazy But True Stories About The United States' 40th President

Cathedrals of Science: The Personalities and Rivalries That Made Modern Chemistry

Learning to Love the Bomb: Canada's Nuclear Weapons During the Cold War

Montreal and the Bomb

Morality and the Bomb: An Ethical Assessment of Nuclear Deterrence

How the End Begins: The Road to a Nuclear World War III

Countdown 1945: The Extraordinary Story of the 116 Days That Changed the World (Large Print Edition)

Making a Real Killing: Rocky Flats and the Nuclear West

The Sleeper Agent: The Rise of Lyme Disease, Chronic Illness, and the Great Imitator Antigens of Biological Warfare

Atomic Doctors: Conscience and Complicity at the Dawn of the Nuclear Age

The Manhattan Project: Big Science and the Atom Bomb

Prompt and Utter Destruction: Truman and the use of Atomic Bombs against Japan (16pt Large Print Edition)

The Enola Gay: The B-29 That Dropped the Atomic Bomb on Hiroshima

France, Germany, and Nuclear Deterrence: Quarrels and Convergences During the Cold War and Beyond