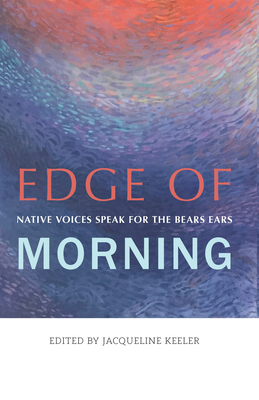 Edge of Morning: Native Voices Speak for the Bears Ears

An important new collection of Native American writers essaying the cultural significance of Utah's Bears Ears landscape.
--THE SALT LAKE TRIBUNE In support of tribal efforts to protect the Bears Ears, Native writers bear testimony to the fragile and essential nature of this sacred landscape in America's remote red rock country. Through poem and essay, these often-ignored voices explore the ways many native people derive tradition, sustenance, and cultural history from the Bears Ears. To us, these places represent more than grass, hills, mountains, and trees...they hold the links to our past and our future. --Martie Simmons, Ho-Chunk The fifteen contributors are multi-generational writers, poets, activists, teachers, students, and public officials, each with a strong tie to landscape and a particular story to tell. Willie Grayeyes, Chairman of Utah Diné Bikéyah, shares his ancestral ties to the Bears Ears. Klee Benally, Diné activist, musician, and filmmaker, asks, What part of sacred don't you understand? Morning Star Gali, Tribal Historic Preservation Officer at Pit River Tribe, speaks to the fight for cultural preservation. The fifteen contributors speak for the Bears Ears and elevate the conversation around tribal sovereignty and sacred places across the US. Editor JACQUELINE KEELER is a Navajo/Dakota writer who lives in Portland, Oregon. She is co-founder of Eradicating Offensive Native Mascotry, which seeks to end the use of racial groups as mascots, as well as the use of other stereotypical representations in popular culture. Her work has appeared in The Nation, Indian Country Today, Earth Island Journal, Salon.com, and elsewhere.

Last Letter to a Reader

Troll Magic: Hidden Folk from the Mountains and Forests of Norway

The Cross of Redemption: Uncollected Writings

The Collected Essays of Elizabeth Hardwick

The Tribe: Portraits of Cuba

The Big Book of Science Fiction

There Is Simply Too Much to Think about: Collected Nonfiction

What Cartooning Really Is: The Major Interviews with Charles M. Schulz

Minnesota Not So Nice: Eighteen Tales of Bad Behavior

Alone Together: Love, Grief, and Comfort in the Time of Covid-19

The Collected Stories of Eudora Welty

Christmas in Minnesota: A Celebration in Memories, Stories, and Recipes of Seasons Past

Crossfire: A Litany for Survival

The Whiskey of Our Discontent: Gwendolyn Brooks as Conscience and Change Agent

Between Eternities: And Other Writings

A Paris All Your Own: Bestselling Women Writers on the City of Light

The Blumhouse Book of Nightmares: The Haunted City

Handy Farm Devices and How to Make Them

The Essential Tales and Poems of Edgar Allan Poe

This Bridge Called My Back, Fortieth Anniversary Edition