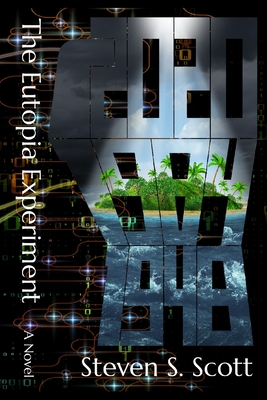 Etta spends all the time she can in her home away from home, where she rides her bike and plays arcade games. But when the time comes to go to her real home, she pushes a plastic button on the back of her neck to exit the Simulation. The Simulation is of the year 1984, and is Etta's escape from a shit existence. The real world is the year 2056, which has been ravaged by climate change and wars. Yet though the house she shares with her mother is filthy and barely big enough to fit their bed, they have a big-screen TV and VR entertainment. No one works, and they don't even think about not having to pay for anything. There are no schools, no literacy, no knowledge of anything outside their immediate experience. Media is mindless drivel, when it's not fomenting race war. Etta's clan is always in conflict with other clans that aren't black like hers. There's nowhere to go, and leaving the house is deadly anyway. The Simulation was intended to use technology to show how life could be if working people were empowered, that is if democracy actually functioned. The Simulation was intended to show an alternate 1984 from the one that actually happened, where the state of the world not only appeared idyllic but truly was. But it didn't work out that way. The Authority decides what content is available, and it censored the Eutopia of any information that might foment rebellion against them, for anyone to even know the Authority exists. The next day when Etta returns to 1984, things have changed. She and her best friend Eva don't appear as white guys, as they've chosen to be. They're attacked by others in the Simulation, and when they try to leave they find their exit buttons are gone. The neutral denizens who've guided them all along with suggestions of things to do, are now gibbering about the Authority and how democracy was destroyed. They also tell Etta to play a Game, that winning it will help them. Others in the Simulation appear to only become part of the descending chaos and violence. But Etta decides to play the Game, seeing no other way out. She and Eva are led by the Game through particular sites in their city in 1984, into ever greater danger as the day passes. Etta comes to realize in the process that the Authority is something in her real world. She learns there's a place called the Island near her real home, where the elite live in luxury. She's told that if she wins the Game, her reward is to not only exit the Simulation but move to the Island. In the end, Etta learns why she and everyone else was trapped in the Simulation, and why many died. She learns why the Game was initiated at the same time, and how it all relates to the Authority. In the end, Etta learns how the Authority itself can be removed and people like her empowered in its place.

The Republic of Thieves: The Gentleman Bastard Sequence, Book Three

Flow My Tears, The Policeman Said

The Resurrectionist: The Lost Work of Dr. Spencer Black