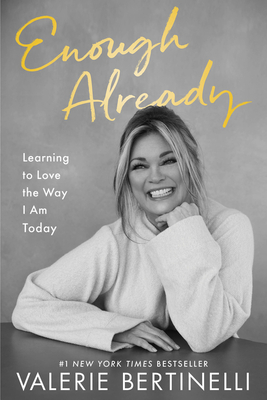 Behind the curtain of her happy on-screen persona, Valerie Bertinelli's life has been no easy ride, especially when it comes to her own self-image and self-worth. She waged a war against herself for years, learning to equate her value to her appearance as a child star on One Day at a Time and punishing herself in order to fit into the unachievable Hollywood mold. She struggled to make her marriage to Eddie Van Halen -- the true love of her life -- work, despite all the rifts the rock-star lifestyle created between them. She then watched her son follow in his father's footsteps, right up onto the stage of Van Halen concerts, and begin his own music career. And like so many women, she cared for her parents as their health declined and saw the roles of parent and child reverse. Through mourning the loss of her parents, discovering more about her family's past, and realizing how short life really is when she and her son lost Eddie, Valerie finally said, Enough already! to a lifelong battle with the scale and found a new path forward to joy and connection. Despite hardships and the pressures of the media industry to be something she's not, Valerie is, at last, accepting herself: she knows who she is, has discovered her self-worth, and has learned how to prioritize her health and happiness over her weight. With an intimate look into her insecurities, heartbreaks, losses, triumphs, and revelations, Enough Already is the story of Valerie's sometimes humorous, sometimes raw, but always honest journey to love herself and find joy in the everyday, in family, and in the food and memories we share.

This thoughtful, bighearted book is sure to be a hit with Bertinelli fans and those with an appetite for stories of hard-won self-acceptance. A warmly intimate memoir.

In a series of brutally frank essays, Bertinelli looks back on the emotional struggles and triumphs of her life. By turns raw and inspiring, this contains a little bit of wisdom for everyone.

Las Mujeres Que Aman Demasiado / Women Who Love Too Much

Dopesick: Dealers, Doctors, and the Drug Company That Addicted America

Be-YOU-tiful: Flip the Script and Celebrate Your True Beauty

Get Your Loved One Sober: Alternatives to Nagging, Pleading, and Threatening

In the Shadow of the Mountain: A Memoir of Courage

In the Realm of Hungry Ghosts: Close Encounters with Addiction

The Trust Solution: A couple's guide to healing intimate betrayal

Your Sexually Addicted Spouse: How Partners Can Cope and Heal

Breathing Under Water: Spirituality and the Twelve Steps

Not Drinking Tonight: A Guide to Creating a Sober Life You Love

Allen Carr's Quit Drinking Without Willpower: Be a Happy Nondrinker

Beyond Addiction: How Science and Kindness Help People Change: A Guide for Families

Chaos to Clarity: Seeing the Signs and Breaking the Cycles

More Than a Body: Your Body Is an Instrument, Not an Ornament

We Are the Luckiest: The Surprising Magic of a Sober Life

The Illustrated Easy Way to Stop Drinking: Free at Last!

Blood Orange Night: My Journey to the Edge of Madness

Unfuck Your Body: Using Science to Reconnect Your Body and Mind to Eat, Sleep, Breathe, Move, and Feel Better

The Alcohol Experiment: Expanded Edition: A 30-Day, Alcohol-Free Challenge to Interrupt Your Habits and Help You Take Control

Betrayal and Beyond Journal

The Weight of Air: A Story of the Lies about Addiction and the Truth about Recovery

Someone I Love Lives Here: A story about looking for love and acceptance in all the wrong places, and finally finding it within myself.

Facing Love Addiction: Giving Yourself the Power to Change the Way You Love

Lust, Men, and Meth: A Gay Man's Guide to Sex and Recovery

This Side of Alcohol: Random thoughts and candid words of pain, hope, humor, love - and all that is possible in sobriety.

The Body Image Workbook: An Eight-Step Program for Learning to Like Your Looks

The Unexpected Joy of Being Sober: Discovering a Happy, Healthy, Wealthy Alcohol-Free Life

Beautiful Boy: A Father's Journey Through His Son's Addiction

Each Day a New Beginning: Daily Meditations for Women

How to Talk to Your Kids About Pornography

Dr. Junkie: One Man's Story of Addiction and Crime That Will Challenge Everything You Know About the War on Drugs

More Than a Body: Your Body Is an Instrument, Not an Ornament

Life Without Ed: How One Woman Declared Independence from Her Eating Disorder and How You Can Too

Undoing Drugs: The Untold Story of Harm Reduction and the Future of Addiction

Rezoom: The Powerful Reframe to End the Crash-And-Burn Cycle of Food Addiction

Women Who Love Too Much: When You Keep Wishing and Hoping He'll Change

Scattered Pink: A Diary of a Woman in Recovery

Refuge Recovery: A Buddhist Path to Recovering from Addiction

Brain over Binge: Why I Was Bulimic, Why Conventional Therapy Didn't Work, and How I Recovered for Good

101 Tips for Recovering from Addictions: Practical Suggestions for Creating a New Life

The Disease of Addiction: A Twenty-First Century Understanding and Beyond

A Woman's Way Through the Twelve Steps

Out of the Shadows: Understanding Sexual Addictions

Responsible Drinking: A Moderation Management Approach for Problem Drinkers with Worksheet [With 30 Worksheets]

The 12 Steps: A Way Out: A Spiritual Process for Healing Damaged Emotions

The Craving Mind: From Cigarettes to Smartphones to Love - Why We Get Hooked and How We Can Break Bad Habits

The Weight of Air: A Story of the Lies about Addiction and the Truth about Recovery

Skinful: A memoir of addiction

The Mindfulness Workbook for Addiction: A Guide to Coping with the Grief, Stress, and Anger That Trigger Addictive Behaviors

The Eating Disorder Trap: A Guide for Clinicians and Loved Ones

Betrayal and Beyond Workbook: Fashioning a Courageous Heart

Chaos Theory: Finding Meaning in the Madness, One Bad Decision at a Time

This Is Your Mind on Plants (Large Print Edition)

The Intuitive Eating Journal: Your Guided Journey for Nourishing a Healthy Relationship with Food

Being Sober: A Step-By-Step Guide to Getting To, Getting Through, and Living in Recovery, Revised and Expanded

Touchstones: A Book of Daily Meditations for Men

Beyond Codependency: And Getting Better All the Time

The Inner Child Workbook: What to Do with Your Past When It Just Won't Go Away

A Woman's Way Through the Twelve Steps Workbook

Death in Mud Lick: A Coal Country Fight Against the Drug Companies That Delivered the Opioid Epidemic

One October Night: A Memoir

Co-Crazy: One Psychologist's Recovery from Codependency and Addiction: A Memoir and Roadmap to Freedom

Happy Healthy Sober: Ditch the Booze and Take Control of Your Life

One Breath at a Time: Buddhism and the Twelve Steps

The Codependency Recovery Plan: A 5-Step Guide to Understand, Accept, and Break Free from the Codependent Cycle

The Binge Eating Recovery Project: Practical Advice on How to Get Better, from Someone Who's Been There

The Recovering: Intoxication and Its Aftermath

The Hope Recovery Devotional: There is Always Hope with God

Home Is Within You: A Memoir

Break Every Chain: A police officer's battle with alcoholism, depression, and devastating loss; and the true story of how God changed his

The Life Recovery Workbook: A Biblical Guide Through the 12 Steps

The Beauty Load: How to feel enough in a world obsessed with beauty

If You're Freaking Out, Read This: A Coping Workbook for Building Good Habits, Behaviors, and Hope for the Future

Be Gratified: 100 Reflective Journal Prompts for Alcoholics & Addicts in Recovery Working the 12 Steps

Eat to Love: A Mindful Guide to Transforming Your Relationship with Food, Body, and Life

Hooked: Food, Free Will, and How the Food Giants Exploit Our Addictions

Stop Sweating & Start Talking: How to Make Sex Chats with Your Kids Easier Than You Think

When Chains Are Broken: How Christ Set Me Free From the Chains of Addiction

You Can Drop It!: How I Dropped 100 Pounds Enjoying Carbs, Cocktails & Chocolate-And You Can Too!

The 12 Step Prayer Book: A Collection of Inspirational Daily Readings

Breathing Under Water Companion Journal: Spirituality and the Twelve Steps

Co-Occurring Disorders: A Whole-Person Approach to the Assessment and Treatment of Substance Use and Mental Disorders (2nd Edition)

The War Of The Gods In Addiction: C. G. Jung, Alcoholics Anonymous, and Archetypal Evil

Addicted to the Monkey Mind: Change the Programming That Sabotages Your Life

Women Food and God: An Unexpected Path to Almost Everything

Answers in the Heart: Daily Meditations for Men and Women Recovering from Sex Addiction

Reclaim the Rebel: 12 Rebellious Acts to Achieve Unconditional Love for Your Body

Cravings and Addictions: Free Yourself from the Struggle of Addictive Behavior with Acceptance and Commitment Therapy

Irresistible: The Rise of Addictive Technology and the Business of Keeping Us Hooked

The Steps We Took

The Awakened Heart: Opening Yourself to the Love You Need

Writing the Big Book: The Creation of A.A.

Girl Walks Out of a Bar: A Memoir

Plant Teachers: Ayahuasca, Tobacco, and the Pursuit of Knowledge

Mending a Shattered Heart: A Guide for Partners of Sex Addicts

Off Center: A Memoir of Addiction, Recovery, and Redemption in Professional Football