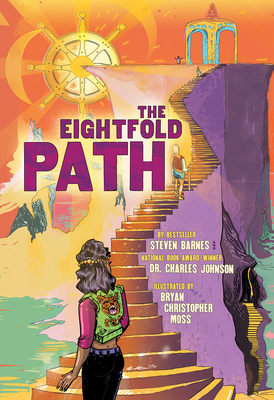 From award-winning authors Charles Johnson and Steven Barnes comes a graphic novel anthology of interconnected Afrofuturistic parables inspired by the teachings of Buddha Eight strangers looking for enlightenment from an ancient spiritual teacher are trapped in a cave high in the mountains on their way to his temple. One of his acolytes directs them to each tell a story that the group can learn from as they wait out the horrible snowstorm that rages outside the cave's entrance. One by one the travelers each share a story that, unbeknownst to them, is actually a morality tale representing one of the aspects of final enlightenment as taught in Buddhism. As the wind howls through the night, they tell symbolic stories of horror, dystopia, high adventure, cyberpunk, and urban fantasy. Each story is a spoke on the symbolic Dharma wheel, and each interlocking tale gets the travelers closer to their true destiny--unveiling the future of the entire human race. This remarkable collection borrows heavily from the traditions of pop-culture morality anthology series such as The Twilight Zone, The Outer Limits, Night Gallery, Lovecraft Country, and the publications of E.C. Comics. Heavily influenced by the science fiction pulps of the 1950s and 1960s, this brilliant collection remixes classic social narratives such as Plato's Allegory of the Cave, Chaucer's The Canterbury Tales, and The Arabian Nights, through an edgy, contemporary, yet spiritually centered lens. In The Eightfold Path, our destinies lie in heeding the lessons given in every one of these entrancing tales.

The Adventure Zone: Petals to the Metal

The Adventure Zone: Murder on the Rockport Limited!

Flung Out of Space: Inspired by the Indecent Adventures of Patricia Highsmith

A Career in Books: A Novel about Friends, Money, and the Occasional Duck Bun

Our Story: A Memoir of Love and Life in China

House of Whispers Vol. 1: The Power Divided (the Sandman Universe)

The Art of Living: Reflections on Mindfulness and the Overexamined Life

The Labyrinth: An Existential Odyssey with Jean-Paul Sartre

Flying Kites: A Story of the 2013 California Prison Hunger Strike

Come Over Come Over

Zodiac Starforce: By the Power of Astra

The Man Without Talent

Blossoms and Bones: Drawing a Life Back Together

Voices in the Dark

Kill My Mother: A Graphic Novel

Drawn Together: The Collected Works of R. and A. Crumb

Pathfinder Volume 2: Of Tooth and Claw

Transmetropolitan Vol. 1: Back on the Street

Fun: Spies, Puzzle Solvers, and a Century of Crosswords

Rumble Volume 1: What Color of Darkness?

Go to Sleep (I Miss You): Cartoons from the Fog of New Parenthood

The Cartoon Introduction to Calculus

Cook Korean!: A Comic Book with Recipes [A Cookbook]

The Metamorphosis: The Illustrated Edition

How to Pick a Fight

The Sacrifice of Darkness

The Green Hand and Other Stories

The Indispensable Calvin and Hobbes: Volume 11

The Days Are Just Packed, 12

I Hate Fairyland Volume 1: Madly Ever After

Conquer the Day: A Book of Affirmations

What's So Funny?: A Cartoonist's Memoir

The Court of Owls

Moonbound: Apollo 11 and the Dream of Spaceflight

The Art of Drag

The Bend of Luck

Pearls Awaits the Tide: A Pearls Before Swine Treasury

Tales from the Umbrella Academy: You Look Like Death Volume 1

Izombie Vol. 1: Dead to the World

Glass Town: The Imaginary World of the Brontës

Can't We Talk about Something More Pleasant?: A Memoir

Why Comics?: From Underground to Everywhere