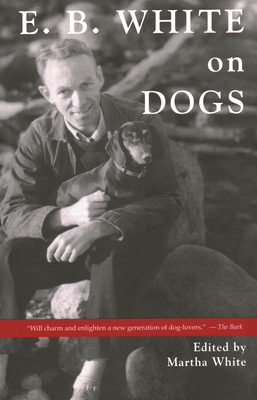 E. B. White (1899-1985) is best known for his children's books, Charlotte's Web, Stuart Little, and The Trumpet of the Swan. Columnist for The New Yorker for over half a century and co-author of Strunk and White's The Elements of Style, White hit his stride as an American literary icon when he began publishing his One Man's Meat columns from his saltwater farm on the coast of Maine.

In E. B. White on Dogs, his granddaughter and manager of his literary estate, Martha White, has compiled the best and funniest of his essays, poems, letters, and sketches depicting over a dozen of White's various canine companions. Featured here are favorite essays such as Two Letters, Both Open, where White takes on the Internal Revenue Service, and also Bedfellows, with its fraudulent reports from White's ignoble old dachshund, Fred. (I just saw an eagle go by. It was carrying a baby.) From The New Yorker's Talk of the Town are some little-known Notes and Comment pieces covering dog shows, sled dog races, and the trials and tribulations of city canines, chief among them a Scottie called Daisy who was kicked out of Schrafft's, arrested, and later run down by a Yellow Cab, prompting The New Yorker to run her Obituary. Some previously unpublished photographs from the E. B. White estate show over a dozen of the family dogs, from the first collie, to various labs, Scotties, dachshunds, terriers, half-breeds, and mutts, all well-loved.

This is a book for readers and writers who recognize a good sentence and a masterful turn of a phrase; for E. B. White fans looking for more from their favorite author; and for dog lovers who may not have discovered the wit, style, and compassion of this most distinguished of American essayists.

Last Letter to a Reader

Troll Magic: Hidden Folk from the Mountains and Forests of Norway

The Cross of Redemption: Uncollected Writings

The Collected Essays of Elizabeth Hardwick

The Tribe: Portraits of Cuba

The Big Book of Science Fiction

There Is Simply Too Much to Think about: Collected Nonfiction

What Cartooning Really Is: The Major Interviews with Charles M. Schulz

Minnesota Not So Nice: Eighteen Tales of Bad Behavior

Alone Together: Love, Grief, and Comfort in the Time of Covid-19

The Collected Stories of Eudora Welty

Christmas in Minnesota: A Celebration in Memories, Stories, and Recipes of Seasons Past

Crossfire: A Litany for Survival

The Whiskey of Our Discontent: Gwendolyn Brooks as Conscience and Change Agent

Between Eternities: And Other Writings

A Paris All Your Own: Bestselling Women Writers on the City of Light

The Blumhouse Book of Nightmares: The Haunted City

Handy Farm Devices and How to Make Them

The Essential Tales and Poems of Edgar Allan Poe

This Bridge Called My Back, Fortieth Anniversary Edition