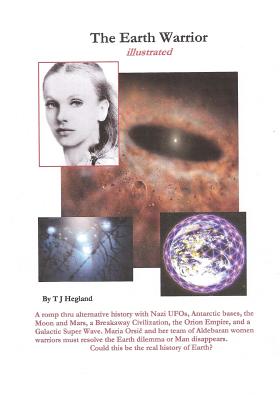 Maria Orsitch was a real woman scientist and humanitarian in the early years of the Nineteenth Century. She fights Dark Forces and ignorance on Earth and fights for the survival of Man, thus earning the title of Earth Warrior. She came to Earth in 1936 to give Man advanced technology, to not only move him forward, but to help him survive a very unusual form of annihilation. To survive, Man will have to be able to safely leave the planet. The Dark Forces at work in the Third Reich seek to divert her technology for their use in the War, but she prevents that and sidetracks Hitler. She makes it clear that the anti-gravity ships (Wunderwaffe) they are building under her control are not for War. She succeeds in shutting down the War and secretly helps Man create a United Earth Space Command. The storyline follows Maria from 1936 with her team throughout 80 years of guidance and protection to a possible but dynamic, fictional ending in 2017. She is involved in most major world events and the book relates these as a mixture of fact and studied speculation with just a little fiction to carry the storyline. The reader is invited to decide which aspects are true; yet, if the reader has a familiarity with the areas of UFOs, ETs, Anunnaki, Greys, and Quantum Physics, the answer will suggest itself. Maria's real-life personna has been honored and she is presented with all the integrity and accuracy extracted from historical records. It is an alternate look at Earth history including romance, humor, science, calamities, personal and space combat, and secret insights into how Earth is really run. (This book actually picks up where Chapter 4 of Virtual Earth Graduate left off... ) If the reader liked Battlestar Galactica, or Star Trek, or Star Wars, s/he will like this book. It really rocks. It is currently being converted to a script for a movie in 2016. In an extensive Glossary, many terms and aspects of the story are explained. She speaks German, Russian and English so for those who are multilingual, there is a linguistic challenge, and if not multilingual, the translations (some are obvious) are also given in the Glossary. When she goes underground in Antarctica, the ice tunnels created by an unknown ancient civilization have left booby-trapped gates with Password Puzzles that she (as well as the reader) attempts to solve -- actually brain teasers that will challenge one's imagination. There is a new Disclaimer preceding Chapter 1 to explain what the book is not, and a new Historical Endnote at the end that helps explain the often unknown aspects of the Third Reich and what was really going on. The book is not about Nazis, the Third Reich, nor the Holocaust, but they are mentioned within the storyline because Maria operated during the 1930s when UFOs were being built in Germany. It is intended to be 'brain candy' (catalyst for contemplation) as well as entertaining and enlightening. Stay tuned for the movie in 2016.

The Codebreaker's Secret: A WWII Novel