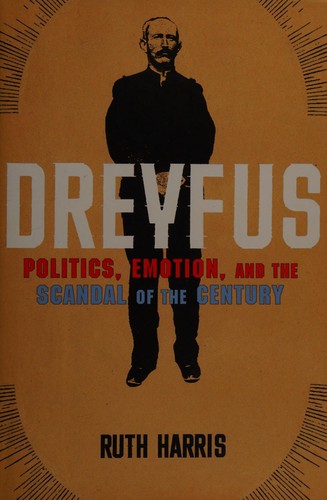 Dreyfus: Politics, Emotion, and the Scandal of the Century

In 1894, Alfred Dreyfus, a Jewish officer in the French army, was wrongfully convicted of being a spy for Germany and imprisoned on Devil's Island. Over the following years, attempts to correct this injustice tore France apart, inflicting wounds on the society which have never fully healed.

But how did a fairly obscure miscarriage of justice come to break up families in bitterness, set off anti-Semitic riots across the French empire, and nearly trigger a coup d'etat? How did a violently reactionary, obscurantist attitude become so powerful in a country that saw itself as the home of enlightenment? Why did the battle over a junior army officer occupy the foremost writers and philosophers of the age, from Emile Zola to Marcel Proust, Emile Durkheim, and many others? What drove the anti-Dreyfusards to persist in their efforts even after it became clear that much of the prosecution's evidence was faked?

Drawing upon thousands of previously unread and unconsidered sources, prizewinning historian Ruth Harris goes beyond the conventional narrative of truth loving democrats uniting against proto-fascists. Instead, she offers the first in-depth history of both sides in the Affair, showing how complex interlocking influences--tensions within the military, the clashing demands of justice and nationalism, and a tangled web of friendships and family connections--shaped both the coalition working to free Dreyfus and the formidable alliances seeking to protect the reputation of the army that had convicted him. Sweeping and engaging, Dreyfus offers a new understanding of one of the most contested and significant moments in modern history.

Dreyfus: Politics, Emotion, and the Scandal of the Century

The Man in the Iron Mask: The True Story of Europe's Most Famous Prisoner

Autumntide of the Middle Ages

Napoleon 1814: The Defence of France

To Kidnap a Pope: Napoleon and Pius VII

Trading with the Enemy: Britain, France, and the 18th-Century Quest for a Peaceful World Order

Napoleon and the Struggle for Germany: The Franco-Prussian War of 1813

The Fall of France: The Nazi Invasion of 1940

Court and Civic Society in the Burgundian Low Countries C.1420-1530

Pirating and Publishing: The Book Trade in the Age of Enlightenment

Algériennes: The Forgotten Women of the Algerian Revolution

The Belle Époque: A Cultural History, Paris and Beyond

Lest Innocent Blood Be Shed

Friends of the Revolution: The British Radical Community in Early Republican Paris 1792-1794

The Song of Roland

Occult Paris: The Lost Magic of the Belle Époque

Why Monet Matters: Meanings Among the Lily Pads

Paris, City of Dreams: Napoleon III, Baron Haussmann, and the Creation of Paris

The First Total War: Napoleon's Europe and the Birth of Warfare as We Know It

The Story of French

The Weidners in Wartime: Letters of Daily Survival and Heroism Under Nazi Rule

A Year in Paris: Season by Season in the City of Light

Acts of Resistance: Against the Tyranny of the Market

Strange Defeat: A Statement of Evidence Written in 1940

Surmounting the Barricades: Women in the Paris Commune

The Waning of the Middle Ages

The Englishman's Daughter: A True Story of Love and Betrayal in World War I

Letters from Spain, 80: A Seventeenth-Century French Noblewoman at the Spanish Royal Court

The Liberation of Paris: How Eisenhower, de Gaulle, and Von Choltitz Saved the City of Light

The Paris Commune: A Revolution in Democracy

French History: A Captivating Guide to the History of France, Charlemagne, and Notre-Dame de Paris

Who Killed My Father

The Lost King of France: How DNA Solved the Mystery of the Murdered Son of Louis XVI and Marie Antoinette

How the French Invented Love: Nine Hundred Years of Passion and Romance

After D-Day: The U.S. Army Encounters the French

Transnational France: The Modern History of a Universal Nation

Visualizing Empire: Africa, Europe, and the Politics of Representation

The Forbidden Best-Sellers of Pre-Revolutionary France

The Colonial Counter-Revolution: From de Gaulle to Sarkozy

The Creation of the French Royal Mistress: From Agnès Sorel to Madame Du Barry

Saving Mona Lisa: The Battle to Protect the Louvre and Its Treasures from the Nazis