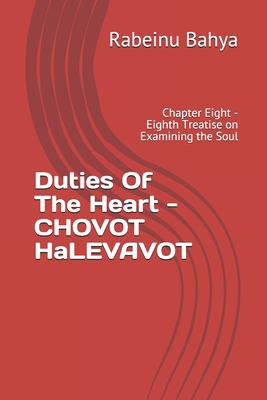 Bahya ben Joseph ibn Paquda (also: Pakuda, Bakuda: 1050-1120, was a Jewish philosopher and rabbi who lived at Zaragoza, Al-Andalus (now Spain). He was one of two people now known as Rabbeinu Behaye, the other being Bible commentator Bahya ben Asher.He was the author of the first Jewish system of ethics, written in Arabic around 1080[2] under the title Al Hidayah ila Faraid al-Qulub, Guide to the Duties of the Heart, and translated into Hebrew by Judah ibn Tibbon in the years 1161-80 under the title Chovot HaLevavot, The Duties of the Heart.Little is known of his life except that he bore the title of dayan, judge at the rabbinical court. Bahya was thoroughly familiar with the Jewish rabbinic literature, as well as the philosophical and scientific Arabic, Greek and Roman literature, quoting frequently from the works of non-Jewish moral philosophers in his work.Bahya says in the introduction to Duties of the Heart that he wished to fill a great need in Jewish literature; he felt that neither the rabbis of the Talmud nor subsequent rabbis adequately brought all the ethical teachings of Judaism into a coherent system.Bahya felt that many Jews paid attention only to the outward observance of Jewish law, the duties to be performed by the parts of the body (Hovot HaEvarim), without regard to the inner ideas and sentiments that should be embodied in the Jewish way of life, the duties of the heart (Hovot HaLev). He also felt that many people disregarded all duties incumbent upon them, whether outward observances or inner moral obligations.In his view, most people acted in accord with selfish, worldly motives. Bahya therefore felt impelled to make an attempt to present the Jewish faith as being essentially a great spiritual truth founded on reason, revelation (especially as regarding the Torah), and Jewish tradition. He laid stress on the willingness and the joyful readiness of the God-loving heart to perform life's duties. He wrote: It is impossible to think that the nations would recognize us as being wise and understanding if we were not to provide infallible proofs and explanations for the truths of the Torah and our faith.[3]Many Jewish writers familiar with his work consider him an original thinker of high rank. According to the Jewish Encyclopedia: Bahya combined in a rare degree great depth of emotion, a vivid poetic imagination, the power of eloquence, and beauty of diction with a penetrating intellect; and he was therefore well fitted to write a work the main object of which was not to argue about and defend the doctrines of Judaism, but to appeal to the sentiments and to stir and elevate the hearts of the people.The Chovot HaLevavot became a popular book among the Jews throughout the world, and parts of it were once recited for devotional purposes during the days before Rosh Hashanah, the Jewish New Year.His works served as inspiration and foundation for many later Jewish writers, including Berachyah in his encyclopedic philosophical work Sefer Hahibbur (The Book of Compilation). This Book is Chapter Eight - Eighth Treatise on Examining the Soul, Introduction of the Author

Duties Of The Heart - Chovot HaLevavot: Chapter One - First Treatise on Unity

The Temple in Early Christianity: Experiencing the Sacred

The Real Name of God: Embracing the Full Essence of the Divine

The Return of the Gods

The Passover Haggadah: An Ancient Story for Modern Times

The God of the Way: A Journey Into the Stories, People, and Faith That Changed the World Forever

Deliverance From Demonic Covenants And Curses

The New American Haggadah: A Simple Passover Seder for the Whole Family

The Newish Jewish Encyclopedia: From Abraham to Zabar's and Everything in Between

The Illustrated Pirkei Avot: A Graphic Novel of Jewish Ethics

Rose Guide to the Temple

Night of Beginnings: A Passover Haggadah

Awestruck by Glory: True-life Thriller. An archaeologist is attacked by an invisible force. Then she makes a breathtaking discovery.

The Practical Tanya - Part One - The Book for Inbetweeners

The Dead Sea Scrolls and the Christian Myth

The Seder: A Short, Sweet and Complete Passover Haggadah

This Is Real and You Are Completely Unprepared: The Days of Awe as a Journey of Transformation

Judaism's Life-Changing Ideas: A Weekly Reading of the Jewish Bible

The Book of Enoch: From-The Apocrypha and Pseudepigrapha of the Old Testament

A Concise Hebrew and Aramaic Lexicon of the Old Testament

Mudhouse Sabbath: An Invitation to a Life of Spiritual Discipline

Have a Little Faith: A True Story

A Guide to the Guide

Looking for an Enemy: 8 Essays on Antisemitism

777 & Other Qabalistic Writings of Aleister Crowley

Sefer Yetzirah: The Book of Creation

The Haggadah: Pathways to Pesach and the Haggadah

My Grandfather's Blessings: Stories of Strength, Refuge, and Belonging

Tanakh-TK: The Holy Scriptures, the New JPS Translation According to the Traditional Hebrew Text

Love Peace and Pursue It: Developing Respect, Compassion, and Connection in Our Relationships from a Torah Perspective

Professor of Apocalypse: The Many Lives of Jacob Taubes

The Book of Proverbs: A Social Justice Commentary

My Quarrel with Hersh Rasseyner

Come and Hear: What I Saw in My Seven-And-A-Half-Year Journey Through the Talmud

The Promise of the Land: A Passover Haggadah

Honoring Tradition, Embracing Modernity: A Reader for the Union for Reform Judaism's Introduction to Judaism Course

The Book of Jasher

The Power of Ideas: Words of Faith and Wisdom

Twelve Tribes: Promise and Peril in the New Israel

Reading Moses, Seeing Jesus: How the Torah Fulfills Its Goal in Yeshua

The Book of Revolutions: The Battles of Priests, Prophets, and Kings That Birthed the Torah

Passover Haggadah: A New English Translation and Instructions for the Seder

Let Us All Breathe Together: Prose, Poems, Practices

The Sacred Bridge: Carta's Atlas of the Biblical World

The Books of Enoch: Complete edition: Including (1) The Ethiopian Book of Enoch, (2) The Slavonic Secrets and (3) The Hebrew Book of Enoch

The Magna Carta of Humanity: Sinai's Revolutionary Faith and the Future of Freedom

The Murders of Moisés Ville: The Rise and Fall of the Jerusalem of South America

The Essential Seder: A Contemporary Haggadah

Songs of the Heart: A Contemporary Translation with Meaningful Insights

The Jewish World of Alexander Hamilton

Here All Along: Finding Meaning, Spirituality, and a Deeper Connection to Life--In Judaism (After Finally Choosing to Look There)

Shemoneh Esrei: Exploring the Fundamentals of Faith Through the Amida Prayer

Judaism Without Tribalism: A Guide to Being a Blessing to All the Peoples of the Earth

Studies in Halakhah and Rabbinic History

The Science of the Kabbalah

Thunder in the Soul: To Be Known by God

The Guide for the Perplexed

The Practical Tanya - Part Two - Gateway to Unity and Faith

To Be a Jew: A Guide to Jewish Observance in Contemporary Life

The Prophets: Two Volumes in One

The Book of Job

Stop Look and Listen: Celebrating Shabbos Through a Spiritual Lens

The Apocrypha: Translated Out of the Original Tongues

Sitting at the Feet of Rabbi Jesus: How the Jewishness of Jesus Can Transform Your Faith

Israel and the Church: An Israeli Examines God's Unfolding Plans for His Chosen Peoples

The Bible with and Without Jesus: How Jews and Christians Read the Same Stories Differently

The Books of Enoch, Jubilees, And Jasher [Deluxe Edition]

There Is No Place Without You: poems

The Way: Using the Wisdom of Kabbalah for Spiritual Transformation and Fulfillment

Sefer Yetzirah: The Book of Formation

Aligning With God's Appointed Times: Discover the Prophetic and Spiritual Meaning of the Biblical Holidays

The Chicken Qabalah of Rabbi Lamed Ben Clifford: Dilettante's Guide to What You Do and Do Not Know to Become a Qabalist

Filled with Fire and Light: Portraits and Legends from the Bible, Talmud, and Hasidic World

The Essene Gospel of Peace: The Complete 4 Books in One Volume

Torah in a Time of Plague: Historical and Contemporary Jewish Responses

God in Search of Man: A Philosophy of Judaism

Malkah's Notebook: A Journey Into the Mystical Aleph-Bet

Separation and Its Discontents: Toward an Evolutionary Theory of Anti-Semitism

My Haggadah Journal: A Guided Journey to Heal, Grow, and Thrive

The Beast That Crouches at the Door

The Sacred Art of Lovingkindness: Preparing to Practice

The International Jew Vol I: The World's Foremost Problem

Kabbalah, Magic & the Great Work of Self Transformation: A Complete Course

The Miracle of the Oil: Receive the Power of God's Anointing