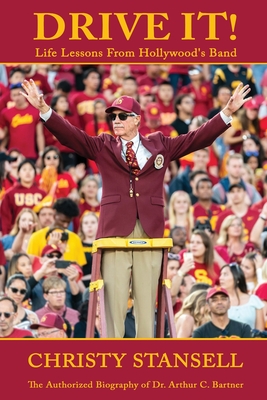 When he retired at age eighty, Dr. Arthur C. Bartner became the longest-standing college marching band director in history-with fifty-one seasons and four hundred fifteen consecutive football games under his whistle. The University of Southern California Trojan Marching Band of today in no way resembles the ensemble he inherited in 1970. Dr. Bartner committed his entire life to building The Spirit of Troy from a handful of reluctant musicians into an institution recognized around the world. The journey from obscurity to celebrity is all about Dr. Bartner's perseverance during challenges, his unwavering dedication to excellence, and most importantly, his belief and confidence in his students. He taught more than music and marching to thousands of college kids during his five-decade career; he gave them once-in-a-lifetime opportunities and mentored them with life lessons to Drive It! long after graduation.

Travel alongside the band and Dr. Bartner on road trips to rivalries, across country for national celebrations, and around the globe as ambassadors representing the United States. Meet rock stars, movie stars, and television celebrities who performed with the TMB, elevating the band to Hollywood stardom. Observe Dr. Bartner leading huge bands at the Olympics, World Expos, and many other grand occasions, entertaining audiences that include U.S. presidents, foreign dignitaries, even the Pope. Visit Disneyland as he directs the elite All-American College Band and meet USC coaches and players who call the band the heartbeat of the team. Whether sports fans, film fans, TV bingers, history buffs, or Disney devotees, there's something here for everyone.

Twice named #1 Best College Marching Band by USA Today, the USC TMB is in a league all its own. Its unique sound, style, and spirit leave a lasting impression. To assimilate fifty years of learning, relive musical memories, and vicariously experience moments in history is the gift of Drive It! Life Lessons from Hollywood's Band.