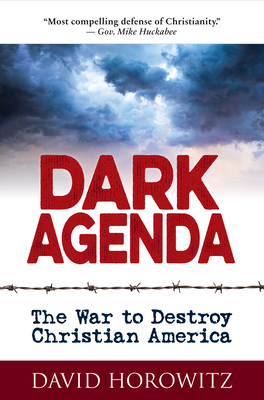 One of the most intellectually compelling and rational defenses of Christianity's role in America. -- Gov Mike Huckabee

DARK AGENDA is an extraordinary look into the left's calculated efforts to create a godless, heathen American society -- and how these efforts must be stopped.

And it is written by David Horowitz, a Jew.

A New York Times bestselling author and leading conservative thinker, Horowitz warns that the rising attacks on Christians and their beliefs threaten all Americans -- including Jews like himself. The liberal establishment and their radical allies envision a new millennium in which Christianity is banished, Horowitz argues. He says that Judeo-Christian values are at the very root of America's democracy. Kill off such values and all of our freedoms could perish.

In Dark Agenda: The War to Destroy Christian America, Horowitz examines how our elites -- increasingly secular and atheist -- are pushing a radical agenda:

Filled with stories that demonstrate the mind-numbing reasons behind the secular Left's smug disdain for Christianity, Horowitz traces the history of religious liberty from the Founding Fathers to now. He shows how the Founding Fathers put aside their own skepticisms about God and religion to write The Declaration of Independence.

Today, he writes Donald Trump's genuine love for his country has galvanized Christians to fight the secular war waged against them -- as the president has become a lightning rod for the radical left.

David Horowitz's powerful new book brings vital insights into the war against Christianity and names the global radicals, leftist Democrats, and money-hungry fat cats of Hollywood and Wall Street responsible for it. Finally, a clear and sensible American voice -- one that is not Christian but Jewish -- stands up to the twisted rantings of those who want to tear down faith and bedrock of American values. In Dark Agenda: The War to Destroy Christian America, David Horowitz delivers an impassioned plea for the restoration of political sanity in America, a perspective that made America great by respecting the faiths of our fathers and mothers.

The Best Book on Politics for Christians in 2019 -- The Stream

The Steal: The Attempt to Overturn the 2020 Election and the People Who Stopped It

The Fighting Soul: On the Road with Bernie Sanders

The Parasitic Mind: How Infectious Ideas Are Killing Common Sense

The Reckoning: Our Nation's Trauma and Finding a Way to Heal

My Life in Full: Work, Family, and Our Future

Our Unfinished March: The Violent Past and Imperiled Future of the Vote-A History, a Crisis, a Plan

Our Vision for Liberation: Engaged Palestinian Leaders & Intellectuals Speak Out

How to Blow Up a Pipeline

The Memo: Twenty Years Inside the Deep State Fighting for America First

Uncontrolled Spread: Why Covid-19 Crushed Us and How We Can Defeat the Next Pandemic

Irresistible Revolution: Marxism's Goal of Conquest & the Unmaking of the American Military

Be a Triangle: How I Went from Being Lost to Getting My Life Into Shape

The Family Roe: An American Story

Spin Dictators: The Changing Face of Tyranny in the 21st Century

Live Not by Lies: A Manual for Christian Dissidents

The Aristocracy of Talent: How Meritocracy Made the Modern World

Lead from the Outside: How to Build Your Future and Make Real Change

The Bond King: How One Man Made a Market, Built an Empire, and Lost It All

Drawdown: The Most Comprehensive Plan Ever Proposed to Reverse Global Warming

I Never Thought of It That Way: How to Have Fearlessly Curious Conversations in Dangerously Divided Times

The Big Sort: Why the Clustering of Like-Minded America Is Tearing Us Apart

The Rage of Innocence: How America Criminalizes Black Youth