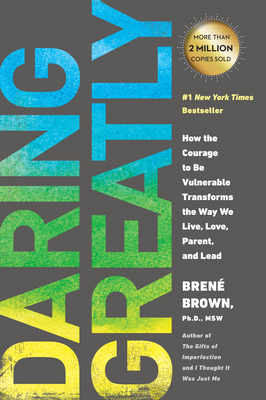 The #1 New York Times bestseller. More than 2 million copies sold! Look for Brené Brown's new podcast, Dare to Lead, as well as her ongoing podcast Unlocking Us! From thought leader Brené Brown, a transformative new vision for the way we lead, love, work, parent, and educate that teaches us the power of vulnerability. It is not the critic who counts; not the man who points out how the strong man stumbles, or where the doer of deeds could have done them better. The credit belongs to the man who is actually in the arena, whose face is marred by dust and sweat and blood; who strives valiantly; . . . who at the best knows in the end the triumph of high achievement, and who at worst, if he fails, at least fails while daring greatly.--Theodore Roosevelt Every day we experience the uncertainty, risks, and emotional exposure that define what it means to be vulnerable or to dare greatly. Based on twelve years of pioneering research, Brené Brown PhD, LMSW, dispels the cultural myth that vulnerability is weakness and argues that it is, in truth, our most accurate measure of courage. Brown explains how vulnerability is both the core of difficult emotions like fear, grief, and disappointment, and the birthplace of love, belonging, joy, empathy, innovation, and creativity. She writes: When we shut ourselves off from vulnerability, we distance ourselves from the experiences that bring purpose and meaning to our lives. Daring Greatly is not about winning or losing. It's about courage. In a world where never enough dominates and feeling afraid has become second nature, vulnerability is subversive. Uncomfortable. It's even a little dangerous at times. And, without question, putting ourselves out there means there's a far greater risk of getting criticized or feeling hurt. But when we step back and examine our lives, we will find that nothing is as uncomfortable, dangerous, and hurtful as standing on the outside of our lives looking in and wondering what it would be like if we had the courage to step into the arena--whether it's a new relationship, an important meeting, the creative process, or a difficult family conversation. Daring Greatly is a practice and a powerful new vision for letting ourselves be seen.

How to Stop Losing Your Sh*t with Your Kids: A Practical Guide to Becoming a Calmer, Happier Parent

Paint by Sticker: Create 12 Masterpieces One Sticker at a Time!

The Subtle Art of Not Giving a F*ck: A Counterintuitive Approach to Living a Good Life

Make Your Bed: Little Things That Can Change Your Life...and Maybe the World

The War of Art: Break Through the Blocks and Win Your Inner Creative Battles

What Happened to You?: Conversations on Trauma, Resilience, and Healing

Think and Grow Rich: The Landmark Bestseller Now Revised and Updated for the 21st Century

The Untethered Soul: The Journey Beyond Yourself

A Walk in the Wood: Meditations on Mindfulness with a Bear Named Pooh

Set Boundaries, Find Peace: A Guide to Reclaiming Yourself

The Gifts of Imperfection: Let Go of Who You Think You're Supposed to Be and Embrace Who You Are

You, Happier: The 7 Neuroscience Secrets of Feeling Good Based on Your Brain Type

Order from Chaos: The Everyday Grind of Staying Organized with Adult ADHD

Adult Children of Emotionally Immature Parents: How to Heal from Distant, Rejecting, or Self-Involved Parents

How to Win Friends and Influence People

Dad, I Want to Hear Your Story: A Father's Guided Journal to Share His Life & His Love

A Hunter-Gatherer's Guide to the 21st Century: Evolution and the Challenges of Modern Life

Kids These Days: A Game Plan For (Re)Connecting With Those We Teach, Lead, & Love

How to Do the Work: Recognize Your Patterns, Heal from Your Past, and Create Your Self

Wreck This Journal: Now in Color

The High 5 Habit: Take Control of Your Life with One Simple Habit

Growing Your Family: Learn How to Flourish and Thrive as a Military Family

Beyond Order: 12 More Rules for Life

The Compound Effect (10th Anniversary Edition): Jumpstart Your Income, Your Life, Your Success

The Crystal Bible: A Definitive Guide to Crystals

You Are a Badass(r): How to Stop Doubting Your Greatness and Start Living an Awesome Life

The Mindful Self-Compassion Workbook: A Proven Way to Accept Yourself, Build Inner Strength, and Thrive

Unfuck Your Boundaries: Build Better Relationships Through Consent, Communication, and Expressing Your Needs

Keep Sharp: Build a Better Brain at Any Age

The 5-Minute Gratitude Journal: Give Thanks, Practice Positivity, Find Joy

Tell Yourself a Better Lie: Use the power of Rapid Transformational Therapy to edit your story and rewrite your life.

Don't Waste My Time: How to Beat All Your Competition on Youtube

The Quest of Rose: The Cosmic Keys of Our Future Becoming

It Works: The Famous Little Red Book That Makes Your Dreams Come True!

It Didn't Start with You: How Inherited Family Trauma Shapes Who We Are and How to End the Cycle

Little Pieces of Hope: Happy-Making Things in a Difficult World

The Laws of Human Nature

You Were Born for This: Astrology for Radical Self-Acceptance

Father to Daughter: Life Lessons on Raising a Girl

Do It for Yourself (Guided Journal): A Motivational Journal

The Little Book of Hygge: Danish Secrets to Happy Living

White Fragility: Why It's So Hard for White People to Talk about Racism

Self-Love Workbook for Women: Release Self-Doubt, Build Self-Compassion, and Embrace Who You Are

The Book of Questions: Revised and Updated

Complex PTSD: From Surviving to Thriving: A GUIDE AND MAP FOR RECOVERING FROM CHILDHOOD TRAUMA

Out of Office: The Big Problem and Bigger Promise of Working from Home

Wreck This Journal (Black): To Create Is to Destroy

I Thought It Was Just Me (But It Isn't): Making the Journey from What Will People Think? to I Am Enough

No Excuses!: The Power of Self-Discipline

Book of Sticky Notes: Stuff I Need to Do (Chalkboard)

Start Where You Are: A Journal for Self-Exploration

El Poder de Los Hábitos: Por Qué Hacemos Lo Que Hacemos En La Vida Y Los Negocios / The Power of Habit: Why We Do What We Do in Life and Business: Por

Essentialism: The Disciplined Pursuit of Less

Breaking the Habit of Being Yourself: How to Lose Your Mind and Create a New One

My Reading Life: A Book Journal

Today Is Going to Be a Great Day! Page-A-Day Calendar 2022: 365 Days of Words to Inspire and Art to Keep

The Purpose Driven Life: What on Earth Am I Here For?

Outwitting the Devil: The Secret to Freedom and Success

Designing Your Life: How to Build a Well-Lived, Joyful Life

Life Is Short - Leave a Legacy: The Todd White Story

Mom, I Want to Hear Your Story: A Mother's Guided Journal To Share Her Life & Her Love

A Message to Garcia

The Highly Sensitive Person: How to Thrive When the World Overwhelms You

One Small Step Can Change Your Life: The Kaizen Way

Crazy Faith: It's Only Crazy Until It Happens

Self-Care Package: Healing Through The Chakras

Really Important Stuff My Dog Has Taught Me

Yoke: My Yoga of Self-Acceptance

Winnie the Pooh: The Little Things in Life

The Power of Your Subconscious Mind: Unlock the Secrets Within

Everything Will Be Okay: Life Lessons for Young Women (from a Former Young Woman)

Tarot for Change: Using the Cards for Self-Care, Acceptance, and Growth

So. Many. Planner Stickers.: 2,600 Stickers to Decorate, Organize, and Brighten Your Planner

Emotional Intelligence: Why It Can Matter More Than IQ