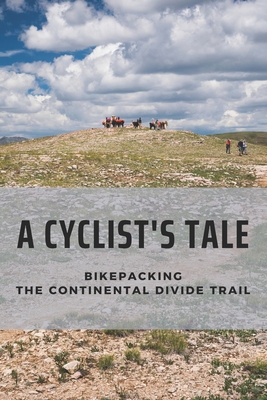 The Tour Divide is an annual mountain biking ride traversing the length of the Rocky Mountains, from Canada to the Mexican border. Following the 2,745-mile (4,418 km) Great Divide Mountain Bike Route, it is an ultra-distance cycling ride that is an extreme test of endurance, self-reliance, and mental toughness

Known as one of the toughest races in the world, the Tour Divide is an unsupported off-road event. If your tire is flat, you fix it. If you run out of water, you must find more. If you're caught in the middle of nowhere, exhausted and blurry-eyed? Find a spot to nap amidst nature and try not to bother the Grizzlies. Starting from zero, Scott trained for two years while maintaining a busy family life and career. Scott was preparing for the ride of his life. In June of 2013, he climbed on that bicycle again, this time to race against 167 other people from all over the world on a trek that would take him from Canada to Mexico in 22 days. Captured through Scott's vivid words and wondrous illustrations, this is the tale of one man's quest to break free of the typical life and conquer his wildest dream.

Undaunted Courage: Meriwether Lewis, Thomas Jefferson, and the Opening of the American West

In the Shadow of the Mountain: A Memoir of Courage

Beyond Possible: One Man, Fourteen Peaks, and the Mountaineering Achievement of a Lifetime

The Moth and the Mountain: A True Story of Love, War, and Everest

Was It Worth It?: A Wilderness Warrior's Long Trail Home

Icebound: Shipwrecked at the Edge of the World

The Stranger in the Woods: The Extraordinary Story of the Last True Hermit

The King's Shadow: Obsession, Betrayal, and the Deadly Quest for the Lost City of Alexandria

The Twenty-Ninth Day: Surviving a Grizzly Attack in the Canadian Tundra

Against the Ice: The Classic Arctic Survival Story

West with the Night

Into the Abyss: An Extraordinary True Story

Never Give Up: My Life in the Wild

Dreams of El Dorado: A History of the American West

Quest: Risk, Adventure and the Search for Meaning

The Curve of Time

Reinhold Messner: My Life at the Limit

The Republic of Pirates: Being the True and Surprising Story of the Caribbean Pirates and the Man Who Brought Them Down

Aquanaut: The Inside Story of the Thai Cave Rescue: A Life Beneath the Surface

The Curse of Oak Island: The Story of the World's Longest Treasure Hunt

Icebound: Shipwrecked at the Edge of the World

Imagine a City: A Pilot's Journey Across the Urban World

West with the Night: A Memoir

A Kingdom Strange: The Brief and Tragic History of the Lost Colony of Roanoke

A Land So Strange: The Epic Journey of Cabeza de Vaca: The Extraordinary Tale of a Shipwrecked Spaniard Who Walked Across America in the

438 Days: An Extraordinary True Story of Survival at Sea

Nobody Will Shoot You If You Make Them Laugh: One Man's Journey Through the Mountains and Valleys of Life

Into the Planet: My Life as a Cave Diver

The Adventurer's Son: A Memoir

Welcome to the Goddamn Ice Cube: Chasing Fear and Finding Home in the Great White North

Running Against the Tide: True Tales from the Stud of the Sea

Natural Disaster: I Cover Them. I Am One.

The Curse of Oak Island: The Story of the World's Longest Treasure Hunt

Worth: A Story of Favor and Forgiveness

Beyond the Hundredth Meridian: John Wesley Powell and the Second Opening of the West

From The Potato to Star Trek and Beyond: Memoirs of a Rocket Scientist

Fighting for Space: Two Pilots and Their Historic Battle for Female Spaceflight

The Ride of Her Life: The True Story of a Woman, Her Horse, and Their Last-Chance Journey Across America (Large Print Edition)

Odyssey: Young Charles Darwin, the Beagle, and the Voyage That Changed the World

The Art of Patience: Seeking the Snow Leopard in Tibet

Grains of Sand: Tales of a Paranormal Life

The Rock, the Road, and the Rabbi: My Journey Into the Heart of Scriptural Faith and the Land Where It All Began

Straits: Beyond the Myth of Magellan

The Interrupted Journey: Two Lost Hours Aboard a Ufo: The Abduction of Betty and Barney Hill

Into the Great Emptiness: Peril and Survival on the Greenland Ice Cap

The Push: A Climber's Search for the Path

Once Around Algonquin: An Epic Canoe Journey

Don't Blow Yourself Up: The Further True Adventures and Travails of the Rocket Boy of October Sky

The Impossible First: From Fire to Ice--Crossing Antarctica Alone

Into Thin Air: A Personal Account of the Mount Everest Disaster

Ada Blackjack: A True Story of Survival in the Arctic

From The Potato to Star Trek and Beyond: Memoirs of a Rocket Scientist

Mountains of the Mind: Adventures in Reaching the Summit

Death in the Long Grass: A Big Game Hunter's Adventures in the African Bush

In the Land of Wilderness: The writings of Marty Meierotto

Red Wings Through the Forest

The Final Frontiersman: Heimo Korth and His Family, Alone in Alaska's Arctic Wilderness

The Last Viking: The Life of Roald Amundsen

Dandelions of Key West: A Collection of Whimsical Short Stories by Two Military Brats Who Blossomed Within the Conch Community They Now Call H

Call-Out: A Climber's Tales of Mountain Rescue in Scotland

The Art of Dowsing

Running Against the Tide: True Tales from the Stud of the Sea

Memoirs of a Telephone Man

Intrepid Explorer: The Autobiography of the World's Best Mine Finder

Miracle in the Andes: 72 Days on the Mountain and My Long Trek Home

That Wild Country: An Epic Journey Through the Past, Present, and Future of America's Public Lands

Chasing Lions: One woman's 55,000-mile journey in search of her inner lion

Son of a Sandstorm

Fate Is the Hunter

Alone on the Ice: The Greatest Survival Story in the History of Exploration

The Last Great Mountain: The First Ascent of Kangchenjunga

Mountain Man: John Colter, the Lewis & Clark Expedition, and the Call of the American West

Into the Silence: The Great War, Mallory, and the Conquest of Everest

When I Fell from the Sky: The True Story of One Woman's Miraculous Survival

Awesome by Accident: How adapting to a tragic accident led me to create my extraordinary life

Our Summer with the Eskimos

A Window to Heaven: The Daring First Ascent of Denali: America's Wildest Peak

Conquistadors of the Useless

River of Darkness: Francisco Orellana and the Deadly First Voyage Through the Amazon

The Journey is Just as Important as the Destination

Me Caribou Is On Fire: International Adventures of An Alaskan Hunting Guide

Paddling North: A Solo Adventure Along the Inside Passage

Flying Free: My Victory Over Fear to Become the First Latina Pilot on the Us Aerobatic Team

The Moth and the Mountain: A True Story of Love, War, and Everest

Tigers and Tomahawks: The American Volunteer Group in China 1941-1942

Limits of the Known

As Long as It's Fun: The Epic Voyages and Extraordinary Times of Lin and Larry Pardey

The Next Everest: Surviving the Mountain's Deadliest Day and Finding the Resilience to Climb Again

Between a Rock and a Hard Place

The Whisper on the Night Wind: The True History of a Wilderness Legend

Onward from Apathy: A Personal and Professional Odyssey

The Broken Road: From the Iron Gates to Mount Athos

Babe in the Woods: Self Portrait

Lost in the Valley of Death: A Story of Obsession and Danger in the Himalayas (Large Print Edition)

The Next Everest: Surviving the Mountain's Deadliest Day and Finding the Resilience to Climb Again

Finding Everett Ruess: The Life and Unsolved Disappearance of a Legendary Wilderness Explorer

Farther Than Any Man: The Rise and Fall of Captain James Cook

Olive the Lionheart: Lost Love, Imperial Spies, and One Woman's Journey Into the Heart of Africa

Corky Carroll - Not Done Yet: An epic journey of the planet's first professional surfer.

Raiders of the Hidden Ark: The story of the Parker expedition to Jerusalem

On the Hoof: Pacific to Atlantic, a 3,800-Mile Adventure