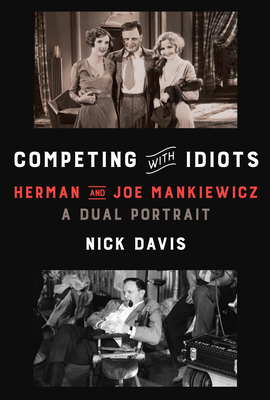 Competing with Idiots: Herman and Joe Mankiewicz, a Dual Portrait

A fascinating, complex dual biography of Hollywood's most dazzling--and famous--brothers, and a dark, riveting portrait of competition, love, and enmity that ultimately undid them both. One most famous for having written Citizen Kane (with Orson Welles, most recently portrayed in David Fincher's acclaimed Netflix film, Mank); the other, All About Eve; one, who only wrote screenplays but believed himself to be a serious playwright, slowly dying of alcoholism and disappointment; the other, a four-time Academy Award-winning director, auteur, sorcerer, and seducer of leading ladies, one of Hollywood's most literate and intelligent filmmakers.

Herman went to Hollywood in 1926, was almost immediately successful (his telegram to Hecht back east: MILLIONS ARE TO BE GRABBED OUT HERE AND YOUR ONLY COMPETITION IS IDIOTS. DON'T LET THIS GET AROUND.), becoming one of the highest-paid screenwriters in Hollywood . . .

Joe, eleven years younger, focused, organized, a disciplined writer, with a far more distinguished career, surpassing his worshipped older brother . . . producing The Philadelphia Story, writing and directing A Letter to Three Wives and All About Eve, both of which won him Oscars for writing and directing (All About Eve received a record fourteen Oscar nominations), before seeing his career upended by the spectacular fiasco of Cleopatra . . .

In this large, moving portrait, meticulously woven together by the grandson of Herman, great-nephew of Joe, we see the lives of these two men--their dreams and desires, their fears and feuds, struggling to free themselves from their dark past; and the driving forces that kept them bound to a system they loved and hated.

In the Blink of an Eye: A Perspective on Film Editing

The Story of Marvel Studios: The Making of the Marvel Cinematic Universe

The Twelve Lives of Alfred Hitchcock: An Anatomy of the Master of Suspense

The World of It

Movie Speak: How to Talk Like You Belong on a Film Set

The Devil's Candy: The Anatomy of a Hollywood Fiasco

Notes on the Cinematograph

52 Little Lessons from It's a Wonderful Life

The Location Sound Bible: How to Record Professional Dialog for Film and TV

Improvise Freely: Throw away the rulebook and unleash your creativity

The Filmmaker's Handbook: A Comprehensive Guide for the Digital Age: Fifth Edition

Audience-Ology: How Moviegoers Shape the Films We Love

20th Century-Fox: Darryl F. Zanuck and the Creation of the Modern Film Studio

The Walt Disney Studios: A Lot to Remember

Rise of the Filmtrepreneur: How to Turn Your Independent Film into a Profitable Business

Apropos of Nothing: Autobiography

The Skillful Huntsman: Visual Development of a Grimm Tale at Art Center College of Design

Columbia Pictures: Portrait of a Studio

The Ride of a Lifetime: Lessons Learned from 15 Years as CEO of the Walt Disney Company (Large Print Edition)

Billy Wilder: Dancing on the Edge

The Man with the Golden Eye: Designing the James Bond Films

Visual Storytelling: How to Speak to the Audience Without Saying a Word

The Anime Art of Hayao Miyazaki

Back to the Future Revised and Expanded Edition: The Ultimate Visual History

The Art of How to Train Your Dragon 2

Sound Design: The Expressive Power of Music, Voice and Sound Effects in Cinema

A Light in the Dark: A History of Movie Directors

Harry Potter: The Broom Collection: & Other Props from the Wizarding World

Notes on Directing: 130 Lessons in Leadership from the Director's Chair

Tawdry Tales and Confessions from Horror's Boy Next Door

Engulfed: The Death of Paramount Pictures and the Birth of Corporate Hollywood

Godzilla: The Art of Destruction

The Art of Rogue One: A Star Wars Story

The Nolan Variations: The Movies, Mysteries, and Marvels of Christopher Nolan

If It's Purple, Someone's Gonna Die: The Power of Color in Visual Storytelling

Bustle Fashions 1885-1887: 41 Patterns with Fashion Plates and Suggestions for Adaptation

To Pitch or Not To Pitch

On Film-Making: An Introduction to the Craft of the Director

A Charlie Brown Christmas: The Making of a Tradition

This Is How You Make a Movie

Setting Up Your Shots: Great Camera Moves Every Filmmaker Should Know

The Art of Star Wars: The Rise of Skywalker

Tim Burton (Updated Edition): The Iconic Filmmaker and His Work

The Essentials Vol. 2: 52 More Must-See Movies and Why They Matter

The Art of Lean Filmmaking: An unconventional guide to creating independent feature films

The Grip of Film

Suicide Squad: Behind the Scenes with the Worst Heroes Ever

But What I Really Want to Do Is Direct: Lessons from a Life Behind the Camera

The Art of the Cut: Editing Concepts Every Filmmaker Should Know

To Pitch or Not To Pitch

The Films of Bong Joon Ho

The Making of Star Wars: Return of the Jedi

Making the Magic Happen: The Art and Craft of Film Directing

The Films in My Life

The Conversations: Walter Murch and the Art of Editing Film

Directing the Story: Professional Storytelling and Storyboarding Techniques for Live Action and Animation

Cheap Movie Tricks: How to Shoot a Short Film for Under $2,000 (Filmmaker Gift)

River of Shadows: Eadweard Muybridge and the Technological Wild West

Conquest of the Useless: Reflections from the Making of Fitzcarraldo

Werner Herzog - A Guide for the Perplexed

Dario Argento: The Man, the Myths & the Magic

Love and Resistance in the Films of Mai Masri

Grammar of the Film Language

We'll Always Have Casablanca: The Legend and Afterlife of Hollywood's Most Beloved Film

Batman V Superman: Dawn of Justice: The Art of the Film

Otto Preminger: The Man Who Would Be King

The Art of Star Wars: The Last Jedi

Tawdry Tales and Confessions from Horror's Boy Next Door

On the Set: The Hidden Rules of Movie Making Etiquette

The Director's Six Senses: An Innovative Approach to Developing Your Filmmaking Skills

The Art of Star Wars: The Force Awakens

Ryan's Daughter: The Making of an Irish Epic

Martin Scorsese and the American Dream

An Illustrated History of Filmmaking

Chroma: A Book of Color

The Filmmaker's Guide to Production Design

I Made A Short Film Now WTF Do I Do With It: A Guide to Film Festivals, Promotion, and Surviving the Ride

Science Fiction Film: Predicting the Impossible in the Age of Neoliberalism

BOXedMAN: I'm Going To Make A Movie - Why Are You Laughing?

Crackpot: The Obsessions of

Print the Legend: The Life and Times of John Ford

Images: My Life in Film

The Hollywood Studio System: A History

The Making of Casablanca: Bogart, Bergman, and World War II

The Filmmaker's Eye: The Language of the Lens: The Power of Lenses and the Expressive Cinematic Image

A Quiet Place: Making of a Silent World