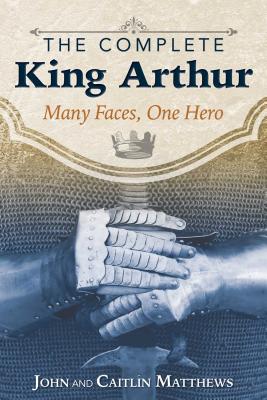 A comprehensive examination of the historical and mythological evidence for every major theory about King Arthur - Explores the history of every Arthur candidate and the geographical arguments that have placed him in different locations - Examines 1,800 years of evidence for Arthur's life and the famous series of 12 battles fought against the Saxons in the 6th century - Reconstructs the history of the 6th century in Britain, when the first references to Arthur and the core events of his reign appear Few legends have had the enduring influence of those surrounding King Arthur. Many believe the stories are based on historical truth. For others Arthur represents the archetype of the brilliant monarch reigning over a fairy-tale kingdom, offering his knights the opportunity to prove their mettle in battle and find gnostic illumination through initiation into sacred mysteries like that of the Grail. Presenting the culmination of more than 40 years' research, John and Caitlín Matthews examine the historical and mythological evidence for every major theory about the existence of King Arthur. Drawing on modern techniques in archaeology and scholarship, they reconstruct the history of the 6th century in Britain, the period when the first unambiguous references to Arthur appear. They explore the history of every Arthur candidate, the geographical arguments that have placed him in different locations, and the evidence for his life and famous battles fought against the Saxons. Was the greatest British hero of all time not a king but a 2nd-century Roman officer active around Hadrian's Wall in Cumbria? A 5th-century soldier who operated in areas as far apart as Cornwall, Wales, Scotland, or Brittany? Or an entirely mythical fiction that provided a figure of light during a dark period of British history? Examining other literary figures from the 5th century such as Vortigern and Ambrosius, the authors also break down the plots of all the major Arthurian romances, including those by Chretien de Troyes, Sir Thomas Malory, and Robert de Boron, to reveal the historical events they are based on. Piecing together the many fragments that constitute the image of Arthur, both the man and the myth, the authors show how each face of Arthur has something to offer and how his modern popularity proves the enduring power of the hero-myth, truly earning Arthur the title he first received in the 15th century: The Once and Future King.

The New View over Atlantis

Plausible Denial : Was the CIA Involved in the Assassination of JFK

Magicians Of The Gods

Our Cosmic Origin: Knowledge in preparation for the ascension of planet earth

Hacking the God Code: The Conspiracy to Steal the Human Soul

Human Race Get Off Your Knees: The Lion Sleeps No More

Weapons of Mass Delusion: When the Republican Party Lost Its Mind

The Big Book of Conspiracy Theories: History's Biggest Delusions & Speculations, from JFK to Area 51, the Illuminati, 9/11, and the Moon Landings

The Convoluted Universe: Book One

The Black Arts: A Concise History of Witchcraft, Demonology, Astrology, Alchemy, and Other Mystical Practices Throughout the Ages

Conspiracy: Why the Rational Believe the Irrational

The Secret Dossier of a Knight Templar of the Sangreal: Revised Edition

Fingerprints of the Gods: The Evidence of Earth's Lost Civilization

The Storm Is Here: An American Crucible

Trust the Plan: The Rise of Qanon and the Conspiracy That Unhinged America

Transylvanian Moonrise: A Secret Initiation in the Mysterious Land of the Gods

Inside the Earth- The Second Tunnel

The Cosmic Dance: Finding Patterns and Pathways in a Chaotic Universe

Mystery of Egypt - The First Tunnel

Visionary: The Mysterious Origins of Human Consciousness (the Definitive Edition of Supernatural)

The Kybalion: A Study of the Hermetic Philosophy of Ancient Egypt and Greece

Mary Magdalene Revealed: The First Apostle, Her Feminist Gospel & the Christianity We Haven't Tried Yet

The Trigger: The Lie That Changed the World

Magicians of the Gods: Updated and Expanded Edition - Sequel to the International Bestseller Fingerprints of the Gods

12th Planet: Book I of the Earth Chronicles

The Day After Roswell

Treason By Lies, Deceit and Fraud: The International Banking and Legal Conspiracy Against America

The Conspiracy Book: A Chronological Journey Through Secret Societies and Hidden Histories

The Book Your Church Doesn't Want You to Read

America Before: The Key to Earth's Lost Civilization

A Death on W Street: The Murder of Seth Rich and the Age of Conspiracy

Species with Amnesia: Our Forgotten History

Beyond Covid The Global Elites Plan for Human 2.0

When Time Began: Book V of the Earth Chronicles

Royal Vengeance: The Assassination of Princess Diana and the Ancient Royal Cult of Human Sacrifice

The Secret Dossier of a Knight Templar of the Sangreal: Revised Edition

The Occult Anatomy of Man: To Which Is Added a Treatise on Occult Masonry

Escaping from Eden: Does Genesis Teach That the Human Race Was Created by God or Engineered by Ets?

Tarot for Beginners: A Holistic Guide to Using the Tarot for Personal Growth and Self Development

Cryptozoology A to Z: The Encyclopedia of Loch Monsters Sasquatch Chupacabras and Other Authentic M

The Scars of Eden: Has Humanity Confused the Idea of God with Memories of Et Contact?

Giants on Record: America's Hidden History, Secrets in the Mounds and the Smithsonian Files

Study Edition The Emerald Tablets of Thoth The Atlantean

Edgar Cayce on the Akashic Records: The Book of Life

Tales from the Time Loop: The Most Comprehensive Expose of the Global Conspiracy Ever Written and All You Need to Know to Be Truly Free

Killing Kennedy: Exposing the Plot, the Cover-Up, and the Consequences

Chariots of the Gods

The Plot to Kill King: The Truth Behind the Assassination of Martin Luther King Jr.

The Stars of the Magdalene: Extended Chapter From The Secret Dossier of a Knight Templar of the Sangreal

How the World Really Works

The Templar Quest to North America: A Photo Journal

The God Code: The Secret of Our Past, the Promise of Our Future

Occult Secrets of Vril: Goddess Energy and the Human Potential

The Ankh: African Origin of Electromagnetism

Framed!: I Never Stood a Chance

The Power of Then: Revealing Egypt's Lost Wisdom- Revised and Updated

Matrix of Power: How the World Has Been Controlled by Powerful People Without Your Knowledge

The Rise of the Fourth Reich: The Secret Societies That Threaten to Take Over America

The Montauk Book of the Living

Confessions of an Illuminati, Volume I: The Whole Truth about the Illuminati and the New World Ordervolume 1

Pawns in the Game

Hit List: An In-Depth Investigation Into the Mysterious Deaths of Witnesses to the JFK Assassination

Origins of the Gods: Qesem Cave, Skinwalkers, and Contact with Transdimensional Intelligences

The Other Goddess: Mary Magdalene and the Goddesses of Eros and Secret Knowledge

The Ancient Giants Who Ruled America: The Missing Skeletons and the Great Smithsonian Cover-Up

Under an Ionized Sky: From Chemtrails to Space Fence Lockdown

The Secret Destiny of America

Framed!: I Never Stood a Chance

Prolonging the Agony: How the Anglo-American Establishment Deliberately Extended WWI by Three-And-A-Half Years.

JFK: The Cia, Vietnam, and the Plot to Assassinate John F. Kennedy

Krivda, the Godtrix Against the Matrix

Spellbound: Modern Science, Ancient Magic, and the Hidden Potential of the Unconscious Mind

Ars Goetia: Book I of the Lemegeton

Confessions of an Illuminati, Volume III: Espionage, Templars and Satanism in the Shadows of the Vaticanvolume 3

JFK Revisited: Through the Looking Glass

The Most Dangerous Book in the World: 9/11 as Mass Ritual

Return of the Fallen Ones: Nephilim Histories, the Antediluvian World, Anunnaki Chronology and the Coming Cataclysm

The Field: The Quest for the Secret Force of the Universe

The Lost Scriptures of Giza: Enoch and the Origin of the World's Oldest Texts

Eyewitness to the Gods: What I Kept Secret for Decades

Anna, Grandmother of Jesus: A Message of Wisdom and Love

I Know What I Saw: Modern-Day Encounters with Monsters of New Urban Legend and Ancient Lore

Serpent in the Sky: The High Wisdom of Ancient Egypt

A Lot of People Are Saying: The New Conspiracism and the Assault on Democracy

The Bigfoot Book: The Encyclopedia of Sasquatch, Yeti and Cryptid Primates

The Protocols of the Learned Elders of Zion

The Ceremony of the Grail: Ancient Mysteries, Gnostic Heresies, and the Lost Rituals of Freemasonry

The Empires of Atlantis: The Origins of Ancient Civilizations and Mystery Traditions Throughout the Ages

The Runes Box: Tools to Connect You to the Magic of the Universe - Contains: A Guide to Reading Runes and 36 Cards for Divination and [With Divination

Covid-19: The Greatest Hoax in History

The Ra Material: Law of One: 40th-Anniversary Boxed Set

Angels of Atlantis Oracle: Receive Inspiration and Healing from the Angelic Kingdoms

Lost Cities of Ancient Lemuria and the Pacific

The Rise and Fall of the Nephilim: The Untold Story of Fallen Angels, Giants on the Earth, and Their Extraterrestrial Origins

Atlantis Rising: The Struggle of Darkness and Light

Unearthing the Lost World of the Cloudeaters: Compelling Evidence of the Incursion of Giants, Their Extraordinary Technology, and Imminent Return

Thrice Great Hermetica and the Janus Age: Hermetic Cosmology, Finance, Politics and Culture in the Middle Ages Through the Late Renaissance

Gods of Money: Wall Street and the Death of the American Century

Family of Secrets: The Bush Dynasty, America's Invisible Government, and the Hidden History of the Last Fifty Years

The 10 Greatest Conspiracies of All Time: Decoding History's Unsolved Mysteries

The Illuminati: The Secret Society That Hijacked the World

The Initiates of the Flame: The Deluxe Edition

Terra Firma: The Earth is Not A Planet, Proved From Scripture, Reason and Fact: Annotated

Drugs as Weapons Against Us: The Cia's Murderous Targeting of Sds, Panthers, Hendrix, Lennon, Cobain, Tupac, and Other Activists