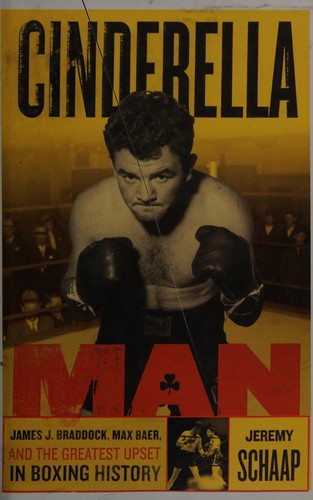 Lost in the annals of boxing is the sport's true Cinderella story. James J. Braddock, dubbed Cinderella Man by Damon Runyon, was a once promising light heavyweight for whom a string of losses in the ring and a broken right hand happened to coincide with the Great Crash of 1929. With one good hand, Braddock was forced to labor on the docks of Hoboken. Only his manager, Joe Gould, still believed in him, finding fights for Braddock to help feed his wife and children. The diminutive, loquacious Jew and the burly, quiet Irishman made one of boxing's oddest couples, but together they staged the greatest comeback in fighting history. In twelve months Braddock went from the relief rolls to face heavyweight champion Max Baer, the Livermore Butcher Boy, renowned for having allegedly killed two men in the ring. A charismatic, natural talent and in every way Braddock's foil, Baer was a towering opponent, a Jew from the West Coast who was famously brash and made great copy both in and out of the ring. A ten-to-one underdog, Braddock carried the hopes and dreams of the working class on his shoulders. And when boxing was the biggest sport in the world, when the heavyweight champion was the biggest star in the world, his unlikely upset made Braddock the most popular champion boxing had ever seen.
Against the gritty backdrop of the Depression, Cinderella Man brings this dramatic all-American story to life, evoking a time when the sport of boxing resonated with a country trying desperately to get back on its feet. Schaap paints a vivid picture of the fight world in its golden age, populated by men of every class and ethnic background and covered voluminously by writers who elevated sports writing to art. Rich in anecdote and color, steeped in history, and full of human interest, Cinderellla Man is a classic David and Goliath tale that transcends the sport.

The Sixteenth Round: From Number 1 Contender to Number 45472

Broken Dreams: Another Year Inside Boxing

The War: Hagler-Hearns and Three Rounds for the Ages

The Cus D'Amato Mind: Learn The Simple Secrets That Took Boxers Like Mike Tyson To Greatness

Damage: The Untold Story of Brain Trauma in Boxing

Boxer's Bible of Counterpunching: The Killer Response to Any Attack

King of the World: Muhammad Ali and the Rise of an American Hero

Wayne Barker: Born to Fight: The Extraordinary Story of a Bare-Knuckle Boxer

The Floyd Mayweather Mind: Learn The Simple Secrets That Transformed Struggle Into Success

The Fight for My Life: Boxing Through Chemo

Jeet Kune Do: Bruce Lee's Commentaries on the Martial Way

Connecticut Boxing: The Fights, the Fighters and the Fight Game

Jack Dempsey and the Roaring Twenties: The Life and Times of a Boxing Icon

Blows to the Head: How Boxing Changed My Mind

Blows to the Head: How Boxing Changed My Mind

President of Pandemonium: The Mad World of Ike Ibeabuchi

The Final Round - Round 16 Robert W. Lee Memoirs

Boxing Like the Champs: Lessons from Boxing's Greatest Fighters

The Good Son: The Life of Ray Boom Boom Mancini

Once There Were Giants: The Golden Age of Heavyweight Boxing

The Boxers of Youngstown Ohio

The Greatest Prize in Sport: The History of the World Heavyweight Boxing Title.

The Complete Boxing handbook: A step by step guide to Boxing

Atlas: From the Streets to the Ring: A Son's Struggle to Become a Man

The Top of His Game: The Best Sportswriting of W. C. Heinz: A Library of America Special Publicaton

A Fistful of Murder: The Fights and Crimes of Carlos Monzon

Boxing Book For Beginners: learn how to do boxing training in 90 minutes and a boxing fitness guide to get fighting fit!

Unbeaten: Rocky Marciano's Fight for Perfection in a Crooked World

Pacman: Behind the Scenes with Manny Pacquiao--The Greatest Pound-For-Pound Fighter in the World

This Boxing Game: A Study in Beautiful Brutality

Staredown: Another Year Inside Boxing

Iron Ambition: My Life with Cus d'Amato

The First Black Boxing Champions: Essays on Fighters of the 1800s to the 1920s

The Ultimate Book of Boxing Lists

Unforgivable Blackness: The Rise and Fall of Jack Johnson

Karate: The Art of Empty Hand Fighting: The Groundbreaking Work on Karate

Boxing Basics: The Techniques and Knowledge Needed to Excel in the Sport of Boxing

Fighting for Life: The Story of Jake Lamotta

Fight To The Finish: The Barge Battle of 1889: "Gentleman" Jim Corbett, Joe Choynski, and the Fight that Launched Boxing's Modern Era

Boxing Like the Champs 2: More Lessons from Boxing's Greatest Fighters

Seconds Out: Women and Fighting

Berserk: The Shocking Life and Death of Edwin Valero

The Greatest Boxing Stories Ever Told: Thirty-Six Incredible Tales from the Ring

The Text Book of Boxing: The Deluxe Edition

Lights Out: The James Toney Story

The Boxing Kings: When American Heavyweights Ruled the Ring

Once There Were Giants: The Golden Age of Heavyweight Boxing

Sporting Blood: Tales from the Dark Side of Boxing

At Home with Muhammad Ali: A Memoir of Love, Loss, and Forgiveness

Art of Boxing and Manual of Training: The Deluxe Edition

Tae Kwon Do: The Ultimate Reference Guide to the World's Most Popular Martial Art

Automatic Ambition: The Guide To Having A Champion's Mindset

Muhammad Ali: His Life and Times

How To Do Chi Sao: Wing Chun Sticky Hands

The Last Great Fight: The Extraordinary Tale of Two Men and How One Fight Changed Their Lives Forever

12 Rounds in Lo's Gym: Boxing and Manhood in Appalachia

Ninja Mind: Harnessing the Mental Strength and Physical Abilities of the Ninjutsu Masters

Lou Ambers: A Biography of the World Lightweight Champion and Hall of Famer

Gentleman Gerry: A Contender in the Ring, a Champion in Recovery

The Straight Left and How to Cultivate It: The Deluxe Edition

In the Ring With Jack Dempsey - Part I: The Making of a Champion

A Few More Rounds: A Collection of Boxing Tales

The Art of Boxing: A Self-Instruction Book

Boxing for MMA: Building the Fistic Edge in Competition & Self-Defense for Men & Women

The Big Fight: My Life in and Out of the Ring

Gentleman Gerry: A Contender in the Ring, a Champion in Recovery

Joe Louis: The Rise and Fall of the Brown Bomber

The Ghost of Johnny Tapia

Kickboxing 101: A Beginner's Guide To Kickboxing For Self Defense, Fitness, and Fun

A Flame of Pure Fire: Jack Dempsey and the Roaring '20s

Taming the Beast: The Untold Story of Mike Tyson

Boxing Confidential: Power, Corruption and the Richest Prize in Sport

We Almost Made It

The Boxers of North, Mid and West Wales

My View from the Corner: A Life in Boxing

How to Photograph Boxing

Boxing - From Chump to Champ 2: An Advanced 7 Step Boxing Manual. Discover how to Develop Discipline, Become Fighting Fit, and Improve Your Ability to

Tales from the Vault: A Celebration of 100 Boxing Closet Classics

How To Do Chi Sao: Wing Chun Sticky Hands

Jeet Kune Do: The Arsenal of Self-Expression

Pound for Pound: A Biography of Sugar Ray Robinson

Beloved Warrior: The Rise and Fall of Alexis Argüello

Boxing for Self-Defense: Taking the Sweet Science from the Ring to the Street