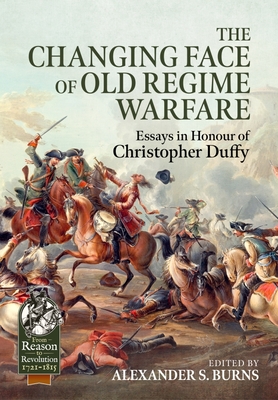 Series: From Reason to Revolution

Over the last 60 years, British historian Professor Christopher Duffy has fundamentally reshaped our understanding of warfare in the late Old Regime. For much of the twentieth century, historians asserted that the military forces of Old Regime Europe were stagnant, formalized, and decorative. In this view, Old Regime armies were a lacy pastel façade destroyed by the new military prowess of Napoleon. A specialist on the Austrian, Prussian, Russian, and Jacobite armies of the mid-eighteenth century, Professor Duffy demanded that we understand the armies of the Old Regime as they were: serious and dangerous military institutions.

The Changing Face of Old Regime Warfare is a festschrift honoring Professor Duffy's legacy of writing on this pivotal period of military history. The book collects 16 essays by scholars from seven countries on three continents, which together tell the story of the dynamic nature of warfare in the Old Regime.

Topics such as cavalry tactics, divisional organization, the rise of light forces, and the effects of war-making on society accompany primary sources translated into English for the first time.

Throughout his career, Professor Duffy has written on a wide variety of topics in over 20 books, from topics ranging from the Seven Years War to the First World War, from the history of fortress warfare to the experience of Marshal Suvorov. It is fitting then, that although centered on eighteenth-century warfare, this book also includes chapters which address the Napoleonic conflicts, and First World War.

The first section, Backgrounds and Retrospectives, explores the state of historical writing on eighteenth-century warfare, as well as Professor Duffy's contribution to it. The second section, Commanders and their Armies, explores the field of traditional military history. It provides coverage of tactical analyses, campaign narratives, and organizational and doctrinal changes for the armies fighting in the Old Regime. The third section, Voices from the Past, provides translations and analyses of military sources which have been previously unavailable to the public. The fourth and final section, New Perspectives, demonstrates the varied picture which methods such as archaeology, cultural history, and colonial history tell us about the imperial history of European states at war. This section contains the final essay of the great American historian Dennis Showalter, published posthumously here with the permission of the Showalter family.

The Changing Face of Old Regime Warfare continues Professor Duffy's legacy of studying the armies and states of Europe in the eighteenth century, and allows a host of his colleagues to honor his fine work.

Putin's Wars: From Chechnya to Ukraine

The Insurgents Dilemma: A Struggle to Prevail

The Commanders: The Leadership Journeys of George Patton, Bernard Montgomery, and Erwin Rommel

The Art of War: Strategy & Tactics from the Age of Horse & Musket

On Dangerous Ground: America's Century in the South China Sea

The Art of War by Sun Tzu