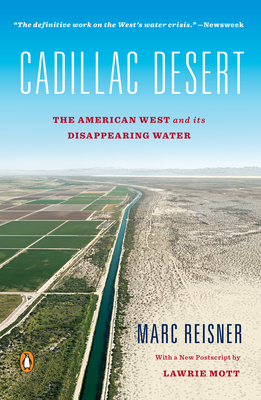 The definitive work on the West's water crisis. --Newsweek The story of the American West is the story of a relentless quest for a precious resource: water. It is a tale of rivers diverted and dammed, of political corruption and intrigue, of billion-dollar battles over water rights, of ecological and economic disaster. In his landmark book, Cadillac Desert, Marc Reisner writes of the earliest settlers, lured by the promise of paradise, and of the ruthless tactics employed by Los Angeles politicians and business interests to ensure the city's growth. He documents the bitter rivalry between two government giants, the Bureau of Reclamation and the U.S. Army Corps of Engineers, in the competition to transform the West. Based on more than a decade of research, Cadillac Desert is a stunning expose and a dramatic, intriguing history of the creation of an Eden--an Eden that may only be a mirage. This edition includes a new postscript by Lawrie Mott, a former staff scientist at the Natural Resources Defense Council, that updates Western water issues over the last two decades, including the long-term impact of climate change and how the region can prepare for the future.

The Art of War: Deluxe Silkbound Edition in a Slipcase

Bridges: A History of the World's Most Spectacular Spans

A Brief History of a Perfect Future: Inventing the World We Can Proudly Leave Our Kids by 2050

How to Rebuild Honda B-Series Engines

Make: Electronics: Learning by Discovery: A Hands-On Primer for the New Electronics Enthusiast

The Business of Baking: The book that inspires, motivates and educates bakers and decorators to achieve sweet business success.

Minuteman: A Technical History of the Missile That Defined American Nuclear Warfare

The E-Myth HVAC Contractor: Why Most HVAC Companies Don't Work and What to Do About It

The Perfect Sound: A Memoir in Stereo

Building the Brooklyn Bridge, 1869-1883: An Illustrated History, with Images in 3D

Delicious: The Evolution of Flavor and How It Made Us Human

Writing Is Designing: Words and the User Experience

The Art and Science of Natural Dyes: Principles, Experiments, and Results

Mother of Invention: How Good Ideas Get Ignored in an Economy Built for Men

Spooked: The Trump Dossier, Black Cube, and the Rise of Private Spies

101 Things I Learned(r) in Film School

Structures: Or Why Things Don't Fall Down

Release Your Anger: Midnight Edition: An Adult Coloring Book with 40 Swear Words to Color and Relax

Racing Toward Zero: The Untold Story of Driving Green

How We Got to the Moon: The People, Technology, and Daring Feats of Science Behind Humanity's Greatest Adventure