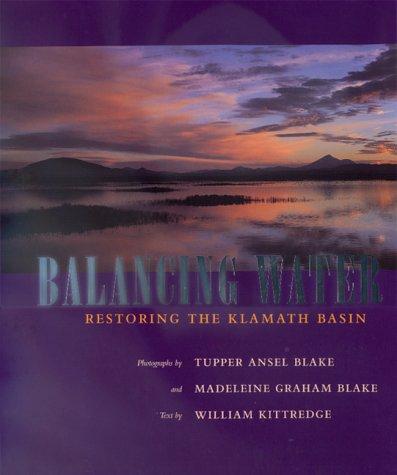 The Klamath Basin is a land of teeming wildlife, expansive marshes, blue-ribbon trout streams, tremendous stretches of forests, and large ranches in southern Oregon and northern California. Known to waterfowl, songbirds, and shorebirds, the Klamath Basin's marshlands are a mecca for birds along the Pacific Flyway. This gorgeously illustrated book is a paean to the beauty of the Klamath Basin and at the same time a sophisticated environmental case study of an endangered region whose story parallels that of watershed development throughout the west. A collaboration between two photographers and a writer, Balancing Water tells the story in words and pictures of the complex relationship between the human and natural history of this region. Spectacular images by Tupper Ansel Blake depict resident species of the area, migratory birds, and dramatic landscapes. Madeleine Graham Blake has contributed portraits of local residents, while archival photographs document the history of the area. William Kittredge's essay on the conjunction of conflicting interests in this wildlands paradise is by turns lyrically personal and brimming with historical and scientific facts. He traces the water flowing through the Klamath Basin, the human history of the watershed, and the land-use conflicts that all touch on the availability of water. Ranchers, loggers, town settlers, Native Americans, tourists, and environmentalists are all represented in the narrative, and their diverse perspectives form a complicated web like that of the interactions among organisms in the ecosystem. Kittredge finds hope in the endangered Klamath Basin, both in successful restoration projects recently begun there, and in the community involvement he sees as necessary for watershed restoration and biodiversity preservation. Emphasizing that we must take care of both human economies and the natural environment, he shows how the two are ultimately interconnected. The Klamath Basin can be a model for watershed restoration elsewhere in the west, as we search for creative ways of solving our intertwined ecological and social problems.

A Man & His Watch: Iconic Watches and Stories from the Men Who Wore Them

Nothing to Hide. Young Men from Slovakia

Vintage Skiing: Nostalgic Images from the Golden Age of Skiing

Really Important Stuff My Dog Has Taught Me

Cat Page-A-Day Gallery Calendar 2022: A Year of Protraits That Capture the Independence, Attitude, and Grace of 365 Felines.

Dogs on the Trail: A Year in the Life

1,000 Places to See Before You Die (Deluxe Edition): The World as You've Never Seen It Before

Yellowstone: A Land of Wild and Wonder

Sand County Almanac: And Sketches Here and There

Murakami T: The T-Shirts I Love

Holiday Magic at the Disney Parks: Celebrations Around the World from Fall to Winter

Out on the Porch Wall Calendar 2022: A Year of Front Row Seats to Fabulous Views.

The New Woman Behind the Camera

Architectural Digest at 100: A Century of Style

Shoes Page-A-Day Gallery Calendar 2022: A Tribute to the World's Most Amazing Footwear

Born to Dance: Celebrating the Wonder of Childhood

There and Back: Photographs from the Edge

Nothing to Hide. Young Men from Slovakia 2022

365 Days in France Picture-A-Day Wall Calendar 2022: A Year of France at a Glance

Behind the Lens: '80s Skateboarding

Chinatown Pretty: Fashion and Wisdom from Chinatown's Most Stylish Seniors

National Geographic the Photo Ark: One Man's Quest to Document the World's Animals

The Budget-Savvy Wedding Planner & Organizer: Checklists, Worksheets, and Essential Tools to Plan the Perfect Wedding on a Small Budget

Alex Webb: The Suffering of Light

Shade: A Tale of Two Presidents

Skyscrapers: A History of the World's Most Extraordinary Buildings -- Revised and Updated

Bob Langrish's World of Horses: A Master Photographer's Lifelong Quest to Capture the Most Magnificent Horses in the World

365 Days in Ireland Picture-A-Day Wall Calendar 2022: A Tour of Ireland by Photograph That Lasts a Year

I Almost Cancelled: Showing Up When Fear Tells You to Stay Home

Uncensored: My Year Behind the Scenes with Michael Lucas and His Models

A Better Life for Their Children: Julius Rosenwald, Booker T. Washington, and the 4,978 Schools That Changed America

Beyond the Dark Veil: Post Mortem & Mourning Photography from the Thanatos Archive

Between the Lines: Stories from the Underground

Strong Is the New Pretty: A Celebration of Girls Being Themselves

Secrets of the Whales

Photography: Night Sky: A Field Guide for Shooting After Dark

The Stolen Daughters of Chibok

New York Then and Now

Two Worlds: Above and Below the Sea

Eye to Eye: Portraits of Lesbians

Really Important Stuff My Cat Has Taught Me

North Korea: Like Nowhere Else: Two Years of Living in the World's Most Secretive State

1000 Sneakers: A Guide to the World's Greatest Kicks, from Sport to Street

Heirs Wall Calendar 2022: Connecting a Vibrant Past to a Brilliant Future

American Portrait: The Story of Us, Told by Us

Under Western Skies: Visionary Gardens from the Rocky Mountains to the Pacific Coast

HRH: So Many Thoughts on Royal Style

We Are Everywhere: Protest, Power, and Pride in the History of Queer Liberation

Paris: From the Air

Slim Aarons: Once Upon a Time

Sharing the Wisdom of Time

Seeing Silence: The Beauty of the World's Most Quiet Places

A Cottage for Every Season: Inspiring Homes with Classic Charm

My Beautiful Black Hair: 101 Natural Hair Stories from the Sisterhood

Nomad: Designing a Home for Escape and Adventure

The Atlas of Beauty: Women of the World in 500 Portraits

Crush and Color: Jason Momoa: A Coloring Book of Fantasies with an Epic Dreamboat

The Places We Live

Our Wild Tails: The Adventures of Henry and Baloo

Formula One: The Pursuit of Speed: A Photographic Celebration of F1's Greatest Moments

Take One Fish: The New School of Scale-To-Tail Cooking and Eating

America the Beautiful: A Story in Photographs

National Geographic the 21st Century: Photographs from the Image Collection

Photography Birds: Field Techniques and the Art of the Image

Photo No-Nos: Meditations on What Not to Photograph