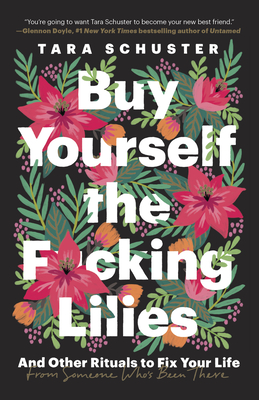 Brutally honest, often hilarious, hard-won lessons in learning to love and care for yourself from a former vice president at Comedy Central who was called ahead of her time by Jordan Peele You're going to want Tara Schuster to become your new best friend.--Glennon Doyle, #1 New York Times bestselling author of Untamed Compelling, persuasive, and useful no matter where you are in your life.--Chelsea Handler, #1 New York Times bestselling author of Life Will Be the Death of Me By the time she was in her late twenties, Tara Schuster was a rising TV executive who had worked for The Daily Show with Jon Stewart and helped launch Key & Peele to viral superstardom. By all appearances, she had mastered being a grown-up. But beneath that veneer of success, she was a chronically anxious, self-medicating mess. No one knew that her road to adulthood had been paved with depression, anxiety, and shame, owing in large part to her minimally parented upbringing. She realized she'd hit rock bottom when she drunk-dialed her therapist pleading for help. Buy Yourself the F*cking Lilies is the story of Tara's path to re-parenting herself and becoming a ninja of self-love. Through simple, daily rituals, Tara transformed her mind, body, and relationships, and shows how to - fake gratitude until you actually feel gratitude
- excavate your emotional wounds and heal them with kindness
- identify your self-limiting beliefs, kick them to the curb, and start living a life you choose
- silence your inner frenemy and shield yourself from self-criticism
- carve out time each morning to start your day empowered, inspired, and ready to rule
- create a life you truly, totally f*cking LOVE This is the book Tara wished someone had given her and it is the book many of us desperately need: a candid, hysterical, addictively readable, practical guide to growing up (no matter where you are in life) and learning to love yourself in a non-throw-up-in-your-mouth-it's-so-cheesy way.

How to Stop Losing Your Sh*t with Your Kids: A Practical Guide to Becoming a Calmer, Happier Parent

You, Happier: The 7 Neuroscience Secrets of Feeling Good Based on Your Brain Type

Paint by Sticker: Create 12 Masterpieces One Sticker at a Time!

The Subtle Art of Not Giving a F*ck: A Counterintuitive Approach to Living a Good Life

Make Your Bed: Little Things That Can Change Your Life...and Maybe the World

The War of Art: Break Through the Blocks and Win Your Inner Creative Battles

The Untethered Soul: The Journey Beyond Yourself

From Strength to Strength: Finding Success, Happiness, and Deep Purpose in the Second Half of Life

Set Boundaries, Find Peace: A Guide to Reclaiming Yourself

Think and Grow Rich: The Landmark Bestseller Now Revised and Updated for the 21st Century

Adult Children of Emotionally Immature Parents: How to Heal from Distant, Rejecting, or Self-Involved Parents

How to Win Friends and Influence People

What Happened to You?: Conversations on Trauma, Resilience, and Healing

The Gifts of Imperfection: Let Go of Who You Think You're Supposed to Be and Embrace Who You Are

You Are a Badass(r): How to Stop Doubting Your Greatness and Start Living an Awesome Life

Life Force: How New Breakthroughs in Precision Medicine Can Transform the Quality of Your Life & Those You Love

Bittersweet: How Sorrow and Longing Make Us Whole

The Mindful Self-Compassion Workbook: A Proven Way to Accept Yourself, Build Inner Strength, and Thrive

Order from Chaos: The Everyday Grind of Staying Organized with Adult ADHD

Kids These Days: A Game Plan For (Re)Connecting With Those We Teach, Lead, & Love

Good Enough: 40ish Devotionals for a Life of Imperfection

A Hunter-Gatherer's Guide to the 21st Century: Evolution and the Challenges of Modern Life

Relentless: From Good to Great to Unstoppable

The Crystal Bible: A Definitive Guide to Crystals

Wreck This Journal: Now in Color

The High 5 Habit: Take Control of Your Life with One Simple Habit

It Didn't Start with You: How Inherited Family Trauma Shapes Who We Are and How to End the Cycle

The Compound Effect (10th Anniversary Edition): Jumpstart Your Income, Your Life, Your Success

Dad, I Want to Hear Your Story: A Father's Guided Journal to Share His Life & His Love

The Power of Your Subconscious Mind: Unlock the Secrets Within

Win Your Breakup: How to Be The One That Got Away

Complex PTSD: From Surviving to Thriving: A GUIDE AND MAP FOR RECOVERING FROM CHILDHOOD TRAUMA

Wreck This Journal (Black): To Create Is to Destroy

It Works: The Famous Little Red Book That Makes Your Dreams Come True!

Read People Like a Book: How to Analyze, Understand, and Predict People's Emotions, Thoughts, Intentions, and Behaviors

The 5-Minute Gratitude Journal: Give Thanks, Practice Positivity, Find Joy

A Walk in the Wood: Meditations on Mindfulness with a Bear Named Pooh

Tell Yourself a Better Lie: Use the power of Rapid Transformational Therapy to edit your story and rewrite your life.

The Laws of Human Nature

Unfuck Your Boundaries: Build Better Relationships Through Consent, Communication, and Expressing Your Needs

Beyond Order: 12 More Rules for Life

How to Do the Work: Recognize Your Patterns, Heal from Your Past, and Create Your Self

An Invisible Thread: The True Story of an 11-Year-Old Panhandler, a Busy Sales Executive, and an Unlikely Meeting with Destiny

Do It for Yourself (Guided Journal): A Motivational Journal

Limitless: Upgrade Your Brain, Learn Anything Faster, and Unlock Your Exceptional Life

One Small Step Can Change Your Life: The Kaizen Way

The Book of Questions: Revised and Updated

I Thought It Was Just Me (But It Isn't): Making the Journey from What Will People Think? to I Am Enough

A Message to Garcia

Breaking the Habit of Being Yourself: How to Lose Your Mind and Create a New One

The Little Book of Hygge: Danish Secrets to Happy Living

Mom, I Want to Hear Your Story: A Mother's Guided Journal To Share Her Life & Her Love

The Lazy Genius Kitchen: Have What You Need, Use What You Have, and Enjoy It Like Never Before

Self-Love Workbook for Women: Release Self-Doubt, Build Self-Compassion, and Embrace Who You Are

Book of Sticky Notes: Stuff I Need to Do (Chalkboard)

Little Pieces of Hope: Happy-Making Things in a Difficult World

Emotional Blackmail: When the People in Your Life Use Fear, Obligation, and Guilt to Manipulate You

You Were Born for This: Astrology for Radical Self-Acceptance

Love and Work: How to Find What You Love, Love What You Do, and Do It for the Rest of Your Life

Find Your People: Building Deep Community in a Lonely World

Keep Sharp: Build a Better Brain at Any Age

The Power of Discipline: How to Use Self Control and Mental Toughness to Achieve Your Goals

Too Nice For Sales: A Practical Guide to Ethical Lead Conversion

Out of Office: The Big Problem and Bigger Promise of Working from Home

Super Attractor: Methods for Manifesting a Life beyond Your Wildest Dreams

Essentialism: The Disciplined Pursuit of Less

Nothing Is Worth More Than This Day.: Finding Joy in Every Moment

El Poder de Los Hábitos: Por Qué Hacemos Lo Que Hacemos En La Vida Y Los Negocios / The Power of Habit: Why We Do What We Do in Life and Business: Por

Self-Care for Adult Children of Emotionally Immature Parents: Honor Your Emotions, Nurture Your Self, and Live with Confidence

Find Your Calm: A Workbook to Manage Anxietyvolume 1

How to Tell a Story: The Essential Guide to Memorable Storytelling from the Moth

The Lightmaker's Manifesto: How to Work for Change Without Losing Your Joy