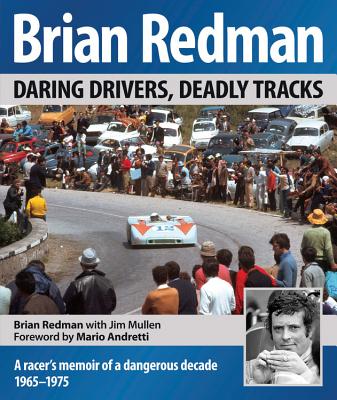 Brian Redman is one of very few notable British racing drivers whose racing life has yet to be put on record in book form. Now that is about to be rectified. Packed with photographs, Redman's memoir is a vivid account of his varied racing exploits, with special focus on the period when he won major sports car races in Ford GT40s, Porsche 908s and 917s, and Ferrari 312PBs, and also became North American Formula 5000 champion three years running. Highly readable, and at times both humorous and poignant, this is a very personal book that will be welcomed by this popular and highly respected driver's legions of fans.

- Five themed chapters about Redman's experiences at the greatest circuits and races of his era: Spa-Francorchamps, the Nurburgring, the Targa Florio, Le Mans and Daytona.

- Diving deep into Redman's fears, friendships and mindset during his time at the top.

- Spa-Francorchamps: Redman won at this daunting track in four consecutive appearances in 1,000Kms races for sports cars, but was also injured in the first of his three big crashes, in the 1968 Belgian Grand Prix.

- The Targa Florio: in 1970 Redman won this heroic race over the uniquely punishing 45-mile circuit in Sicily - and suffered severe burns in another big crash the following year.

- Stories about driving for Porsche, Ferrari and colourful privateers, plus anecdotes about the era's most famous drivers, managers, heroes and rascals.

- Successes in Formula 5000 (three-times champion in the USA) and 2-litre sports cars (South African champion) complete Redman's credentials as one of the finest all-rounders in motor racing.

- Mario Andretti provides an insightful foreword: Redman and he were team-mates in Ferrari's sports car team (1972-73) and the top drivers in North American Formula 5000 (1974-75).

The Toughest I Ever Faced: Hockey Hall of Fame Players Remember Rivals, Teammates and Heroes

Sho-Time: The Inside Story of Shohei Ohtani and the Greatest Baseball Season Ever Played

The Leadership Secrets of Nick Saban: How Alabama's Coach Became the Greatest Ever

Pickleball for All: Everything But the Kitchen Sink

Frank and Fearless: A Life in Boxing

The Winning Playbook: Strategies for Life on and Off the Field

The Running Body: A Memoir

Love and Fury: The Magic and Mayhem of Life with Tyson

Running and Returning: Seeking Balance in an Imperfect World

28: A Photographic Tribute to Buster Posey

A Race with Infamy: The Lance Macklin Story

The Last Folk Hero: The Life and Myth of Bo Jackson

Carry on: A Story of Resilience, Redemption, and an Unlikely Family

It Was Always a Choice: Picking Up the Baton of Athlete Activism

Bowerman and the Men of Oregon: The Story of Oregon's Legendary Coach and Nike's Cofounder

The Original: Living Life Through Hockey

I Never Had It Made: The Autobiography of Jackie Robinson

Catch Me If You Can: Revolutionizing My Sport, Breaking World Records, and Creating a Legacy for Tanzania

Go The Distance: The Inspirational Story of Tom Tunison, Thurman Munson and a Lifelong Quest for Baseball Immortality

Tim Grunhard: View from the Center: My Football Life and the Rebirth of Chiefs Kingdom

Striding Rough Ice: Coaching College Hockey and Growing Up in The Game

Memoirs From the Edge: Exploring the Line Between Life and Death

Horse Speak: Conversations with Horses in Their Language