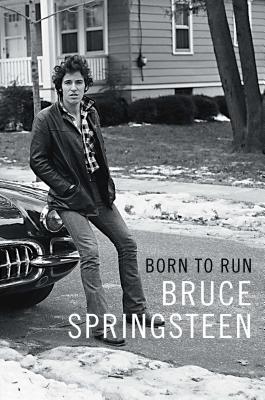 The revelatory and wildly bestselling memoir by legendary rock star Bruce Springsteen: Glorious...a philosophically rich ramble through a rock 'n roll life...It's the lyric he was born to write (USA TODAY, 4 out of 4 stars). Over the past seven years, Bruce Springsteen has privately devoted himself to writing the story of his life. The result is an utterly unique, endlessly exhilarating, last-chance-power-drive of a memoir (Rolling Stone) that offers the same honesty, humor, and originality found in his songs. He describes growing up Catholic in Freehold, New Jersey, amid the poetry, danger, and darkness that fueled his imagination, leading up to the moment he refers to as The Big Bang seeing Elvis Presley's debut on The Ed Sullivan Show. He vividly recounts his relentless drive to become a musician, his early days as a bar band king in Asbury Park, and the rise of the E Street Band. With disarming candor, he also tells for the first time the story of the personal struggles that inspired his best work. Rarely has a performer told his own story with such force and sweep. Like many of his songs (Thunder Road, Badlands, Darkness on the Edge of Town, The River Born in the U.S.A, The Rising, and The Ghost of Tom Joad, to name just a few), Bruce Springsteen's autobiography is written with the lyricism of a singular songwriter and the wisdom of a man who has thought deeply about his experiences. Both an entertaining account of Springsteen's marathon race to the top and a reminder that the one thing you can't run away from is yourself (Entertainment Weekly), Born to Run is much more than a legendary rock star's memoir. This book is a a virtuoso performance, the 508-page equivalent to one of Springsteen and the E Street Band's famous four-hour concerts: Nothing is left onstage, and diehard fans and first-timers alike depart for home sated and yet somehow already aching for more (NPR).

Morning Glory on the Vine: Early Songs and Drawings

Dilla Time: The Life and Afterlife of J Dilla, the Hip-Hop Producer Who Reinvented Rhythm

A Little Devil in America: In Praise of Black Performance

The Holy or the Broken: Leonard Cohen, Jeff Buckley, and the Unlikely Ascent of Hallelujah

The Cambridge History of American Music

Promise That You Will Sing about Me: The Power and Poetry of Kendrick Lamar

Less Noise, More Soul: The Search for Balance in the Art, Technology and Commerce of Music

Kendrick Lamar's to Pimp a Butterfly

Why Vinyl Matters: A Manifesto from Musicians and Fans

A Night at the Opera: An Irreverent Guide to the Plots, the Singers, the Composers, the Recordings

Making a Living in Your Local Music Market: Realizing Your Marketing Potential

The Musical Child: Using the Power of Music to Raise Children Who Are Happy, Healthy, and Whole

Where the Devil Don't Stay: Traveling the South with the Drive-By Truckers

All My Friends Have Deserted: Photos of Yungblud by Tom Pallant

How to Write One Song: Loving the Things We Create and How They Love Us Back

The World of Freddie Mercury 1000 Piece Puzzle: A Jigsaw Puzzle

The Meaning of Metallica: Ride the Lyrics

Year Zero - A World with No Flowers

I Am the Wolf: Lyrics and Writings

Rent: The Complete Book and Lyrics of the Broadway Musical

The Letters of Oscar Hammerstein II

The Complete Beatles Recording Sessions: The Official Story of the Abbey Road Years 1962-1970

He is Our Song

Musical Revolutions: How the Sounds of the Western World Changed

Songwriting Without Boundaries: Lyric Writing Exercises for Finding Your Voice

Bee Gees: How Deep Is Your Love

David Bowie All the Songs: The Story Behind Every Track

Play It! Children's Songs: A Superfast Way to Learn Awesome Songs on Your Piano or Keyboard

Reaching God Speed: Unlocking the Secret Broadcast Revealing the Mystery of Everything

Encanto: Music from the Motion Picture Soundtrack Arranged for Piano/Vocal/Guitar with Color Photos!

Types, Psalms, and Prophecies: Being a Series of Old Testament Studies and Bible Commentaries

Francoise Hardy: A musical tale of love and loss

Give Me a Bucket, Grades 4-8: A Rockin' Collection for Bucket Ensemble [With CDROM]

Pink Floyd All the Songs: The Story Behind Every Track

Head on a Pike: The Illustrated Lyrics of Matt Pike

Reckless Road: Guns N' Roses and the Making of Appetite for Destruction

Einstein's Violin: The Love Affair Between Science, Music, and History's Most Creative Thinkers

Playing with Fire: The Story of Maria Yudina, Pianist in Stalin's Russia

The Stratocaster Chronicles: Celebrating 50 Years of the Fender Strat [With CD]

Dreaming the Beatles: The Love Story of One Band and the Whole World

Hairspray: The Complete Book and Lyrics of the Hit Broadway Musical