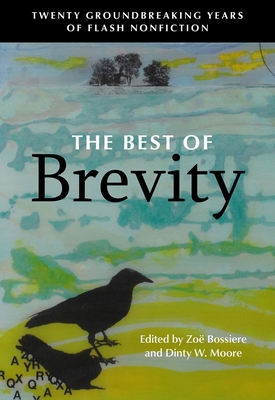 Literary Nonfiction. Flash Nonfiction. Essays. Memoir. Hybrid. How much of the human experience can fit into 750 words? A lot, it turns out. Since its founding in 1997, Brevity: A Journal of Concise Literary Nonfiction has published hundreds of brief nonfiction essays by writers around the world, each within that strict word count. Over the past 20 years, Brevity has become one of the longest-running and most popular online literary publications, a journal readers regularly return to for insightful essays from skilled writers at every stage of their careers. Featuring examples of nonfiction forms such as memoir, narrative, lyric, braided, hermit crab, and hybrid, THE BEST OF BREVITY brings you 84 of the best-loved and most memorable reader favorites, collected in print for the first time. Compressed to their essence, these essays glint with drama, grief, love, and anger, as well as innumerable other lived intensities, resulting in an anthology that is as varied as it is unforgettable, leaving the reader transformed.

THE BEST OF BREVITY feels like the condensed energy of a coiled spring. A vibrant collection, dynamic in its exploration and celebration of the flash form.--Karen Babine

'I didn't have time to write a short letter, so I wrote a long one instead, ' Mark Twain has said. But the writers who have contributed to THE BEST OF BREVITY: TWENTY GROUNDBREAKING YEARS OF FLASH NONFICTION took the time and made the effort. Dinty W. Moore, a pioneer of flash and the founding editor of Brevity, and his colleague Zoë Bossiere, have put together a marvelous collection of magic moments and concise ideas that will intrigue, delight, and inspire readers and writers. Each piece is an all-consuming instant, a thought-provoking breath of enlightenment and surprise. These flashes illustrate the power, versatility, and potential of the creative nonfiction genre.--Lee Gutkind

The Man Who Mistook His Wife for a Hat: And Other Clinical Tales

In the House of Tom Bombadil

The Atlas of Middle-Earth

How to Read Literature Like a Professor Revised Edition: A Lively and Entertaining Guide to Reading Between the Lines

A Little Devil in America: Notes in Praise of Black Performance

A Swim in a Pond in the Rain: In Which Four Russians Give a Master Class on Writing, Reading, and Life

The Heroine with 1001 Faces

Constructing a Nervous System: A Memoir

Manga in Theory and Practice: The Craft of Creating Manga

Craft in the Real World: Rethinking Fiction Writing and Workshopping

Dumbledore: The Life and Lies of Hogwarts's Renowned Headmaster: An Unofficial Exploration

The Illustrated World of Tolkien

The Gilded Page: The Secret Lives of Medieval Manuscripts

The Last Days of Roger Federer: And Other Endings

The Tempest (No Fear Shakespeare): Volume 5

Agatha Christie's England: A Map and Guide from Herb Lester

On Writing and Worldbuilding: Volume II

Sentence: Ten Years and a Thousand Books in Prison

Radio Active: A Memoir of Advocacy in Action, on the Air and in the Streets

Frankenstein: Or `The Modern Prometheus': The 1818 Text

The Art of Memoir

The Spook Who Sat by the Door

The Metamorphoses of Ovid

Down And Out In Paris And London

Much ADO about Nothing (No Fear Shakespeare): Volume 11

Finding Ireland: A Poet's Explorations of Irish Literature and Culture

The Art of Revision: The Last Word

Wonderworks: Literary Invention and the Science of Stories

The Guide to James Joyce's Ulysses

We Tell Ourselves Stories in Order to Live: Collected Nonfiction; Introduction by John Leonard

The Merchant of Venice (No Fear Shakespeare): Volume 10

A Vertical Art: On Poetry

The Writer's Library: The Authors You Love on the Books That Changed Their Lives

Playing in the Dark: Whiteness and the Literary Imagination

Remembered Rapture: The Writer at Work

The Conspiracy Against the Human Race: A Contrivance of Horror

Volume 6 of the Collected Works of Marie-Louise von Franz: Niklaus Von Flüe And Saint Perpetua: A Psychological Interpretation of Their Visions

The Writer's Map: An Atlas of Imaginary Lands

Emily Dickinson's Poems: As She Preserved Them

The Wheel of Time Companion: The People, Places, and History of the Bestselling Series

The Souls of Black Folk: With the Talented Tenth and the Souls of White Folk

The Secret History of Wonder Woman

The History of Science Fiction: A Graphic Novel Adventure

Workshops of Empire: Stegner, Engle, and American Creative Writing During the Cold War

The Writer's Crusade: Kurt Vonnegut and the Many Lives of Slaughterhouse-Five